Doctors Tell Heartbroken Parents To Say Goodbye To Baby. That’s When They Start To Pray 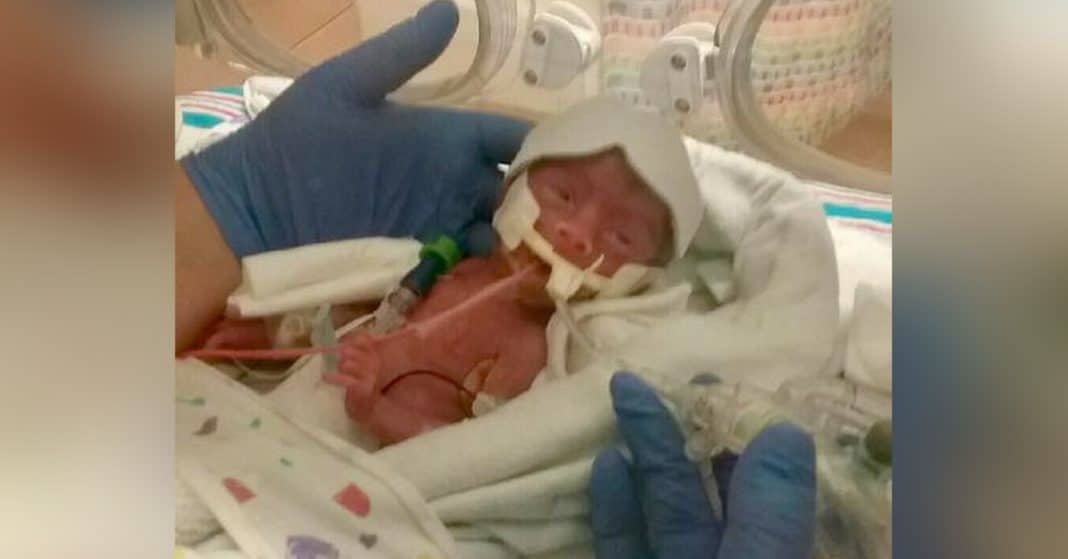 The anticipation of giving birth can be both exciting and worrying. On one hand, a woman is happy to meet her baby, ready for the arrival of the one she has spent 9 months thinking about, waiting for, and loving already. On the other hand, she is conscious of the different things that could be going wrong inside her womb.

A common fear for pregnant mothers is having their baby prematurely. Every day of the 9-month pregnancy is essential in the development and well-being of her fetus, and any delay or pause in this process can definitely have its detriments.

A family in Florida faced this unfortunate outcome when baby Whitley was born at only 25 weeks with a host of complications. The baby girl weighed a little bit over a pound, about the weight of a block of butter or a regular can of vegetables.

Baby Whitley’s first hurdle was a hole in her intestinal tract, known as a perforated bowel, resulting in her being taken to Wolfson’s Children’s Hospital where she underwent surgery at only 9 days old.

Post surgery, the doctors immediately tended to her underdeveloped breathing. Because the lungs are one of the last things to fully develop in the womb, Whitley needed the help of a ventilator to control her breaths. This came with pros and cons. Though it was helping the baby girl breathe, her body would grow dependent on the ventilator and it would hinder her lungs from strengthening on their own.

After a few weeks, Whitley was diagnosed with Chronic Lung Disease and she had to undergo an additional bowel surgery.

Soon, things seemed to be looking up for little Whitley, but just when her parents were about to head home with her, the baby’s health changed course and doctors said they didn’t think she had much time to live. They told her mother and father to embrace every minute with Whitley because at any moment she could pass away from respiratory failure.

When Whitley’s parents heard the negative report, they knew there was only one thing they could do: Pray!

The husband and wife dropped to their knees and prayed for a miracle to take place in their daughter’s situation.

When she was finally stabilized, doctors discovered she had bronchopulmonary dysplasia and persistent pulmonary hypertension. The upper lobe of her right lung was hyperinflated, causing failure in her lungs and tension on her heart.

The only solution was to perform a lobectomy. Not only was the surgery a risky fix, but doctors were unsure if the functioning parts of Whitley’s lungs would be strong enough to keep her alive during the operation.

Desperate for more faith than their own, Whitley’s parents sought comfort and prayer from the social media world, creating a “Praying for Whitley” Facebook page where updates on the baby’s battle were recorded.

The decision was made for Whitley to go through with the lobectomy and, all glory to God, Whitley survived – beyond expectation! Shortly after the procedure, the beautiful baby girl was placed in a standard hospital room with a crib as opposed to a bed warmer!

We are so incredibly thankful that Whitley has made it through! She and her parents will continue to be in our prayers, and we are trusting God for a speedy recovery and miraculous healing! God is so good, and in these moments, it is important that we remember that.

Will you join us in keeping Baby Whitley and her family in your thoughts and prayers? So share this!