Doctors Say ‘Brain-Dead’ Daughter Is Going To Die, Then She Says 4 Words That Stun Them 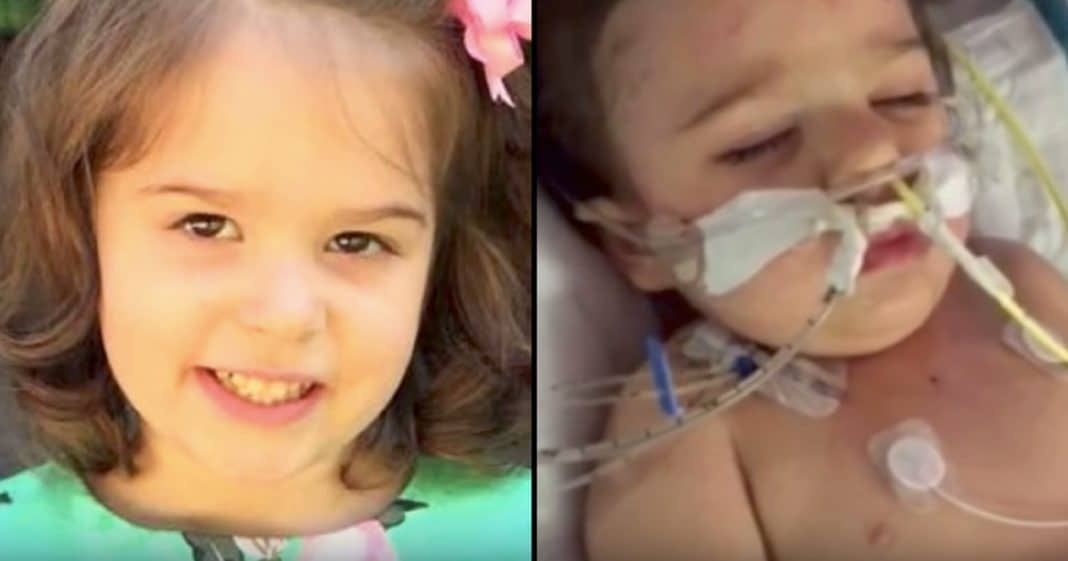 Three-year-old Eden Carlson is lucky to be walking, let alone alive. Last year, Eden broke through the baby gate in her family’s Arkansas backyard and fell into the pool.

Eden didn’t have a pulse for two hours and doctors had little hope for her survival.

Her mother, Kristal Carlson, recalled that horrible day in February where she almost lost her baby girl: “I was completely panicked. Completely panicked,” Carlson recalled. “My kids heard me scream.”

Eden’s older sister called 911 while Kristal rushed Eden inside and began CPR on the not quite one-year-old.

When the Carlson’s realized there was little more that could be done for their daughter and Eden perhaps would never be the same, they took proactive measures.

“When it was becoming clear that medically there was nothing else that could be done with our daughter…we started getting online and researching different ways that brain injuries have been helped through different alternative methods,” Carlson said.

Dr. Paul Harch of LSU Health New Orleans School of Medicine performs the therapy. The Carlsons decided to contact him and see if it could help their daughter.

The little girl was given pressurized oxygen twice a day. She was then placed in a pressurized chamber where she received oxygen five days per week.

“Prior to [her first treatment], she had been uncontrollably squirming, moving side-to-side, and wouldn’t focus her eyes on anything,” Harch said. “What I wanted to find out was if she would respond to oxygen…and how she might respond to the hyperbaric chamber.”

Miraculously, they began to see some progress.

“Hours after the first treatment, they saw her improving, neurologically. She was not squirming as much. She started to focus with her gaze,” Harch recalled. “By the second treatment, it was very clear, her eyes were clearer. She was gazing, focusing, and she had diminished with the squirming so it was obvious she was responsive to that dose.”

Weeks later, to everyone’s surprise, Eden started walking with the support of her mother. Then she shocked them further.

“It’s cute as can be but perfectly spontaneous,” Dr. Harch said. “It’s incredibly gratifying. You know, if my career and life ended tomorrow, this is all worth it. It’s an incredible feeling.”

Dr. Harch isn’t the only one who has noticed a change in the little girl. Carlson has her sweet Eden again.

“Her personality is back; she’s got her sense of humor back,” the grateful mom said. “She’s into everything. She’s a little wobbly on her feet, but she’s getting better all the time.”

Eden isn’t entirely out of the woods. She still has a long recovery ahead of her, but she’s making great progress.

With the help of physical therapy, Eden is walking. While she still needs the support of a walker or another person’s hands, she’s on her way to living a long, normal childhood.

The Carlsons thought they’d lost their baby girl for good. They very well might have, but Eden refused to give up and her family maintained their fighting spirit by searching for other alternatives that could help their child. They didn’t accept the doctor’s prognosis but railed against it, and seeing Eden today is proof that they did the right thing.

Were you amazed to see Eden’s progress after her terrible brain injury? So share this!