Disfigured vet comes face-to-face with a 5-year-old girl. See her reaction to him and his scars 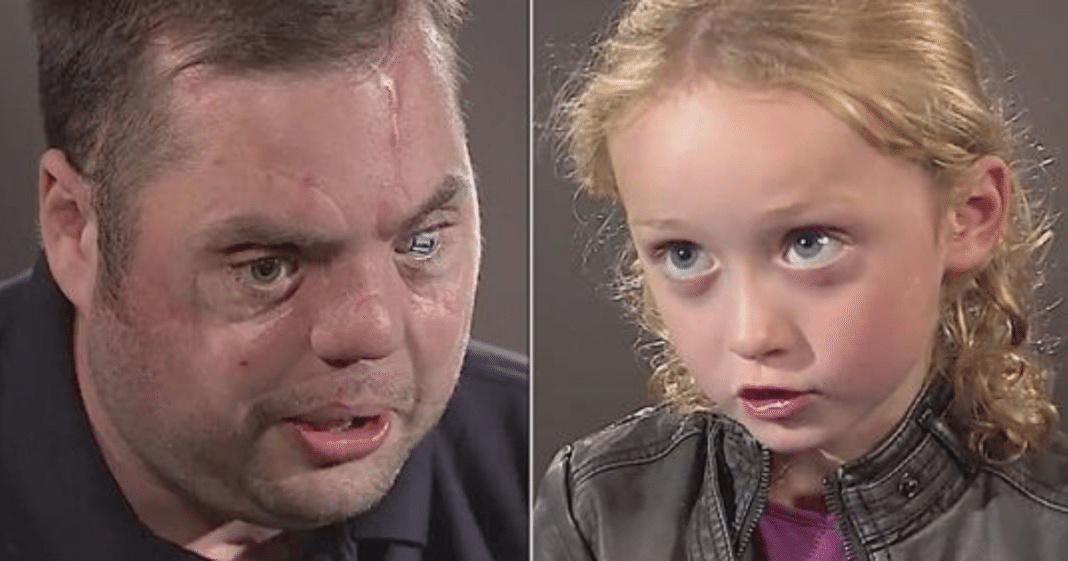 In 2006, British soldier Simon Brown was serving his third tour in Iraq when he tried to rescue a stranded crew after an attack.

After completing his mission, a sniper shot Simon in the face.

The hero soldier was in a coma for 17 days in a coma.

Brown woke up to discover that his face was permanently disfigured by the attack.

His left eye was gone, and he was partially blinded in the other. The cartilage in his nose was also gone.

Since the incident, the soldier’s been determined to use his experiences to help others and regularly gives motivational talks to children in schools. He also does a great deal of work for charities such as Help for Heroes.

Help for Heroes works to support members of the British Armed Forces who suffered illnesses and injuries while serving. Simon made the decision to put everything he has into rebuilding his life and helping other vets through his motivational speaking.

Temperance Pattison is a little girl who’s always been fascinated by war heroes.

In the video below, Tempy’s lifelong dream comes true as she finally gets to meet a real-life soldier.

The meeting was of Help for Heroes’ Facing It Together campaign.

The real-life soldier Tempy got to meet was Simon, who went into the meeting unsure how the little girl would react to his scars.

What happened next touched the hearts of millions of people around the world.

Your heart can’t help but melt at this touching scene.

The little girl probably had less trouble than most adults treating Simon like a human being.

I have a feeling that both Simon and Temperance (as she prefers to be called) will be friends for a very long time.

May God bless them both.