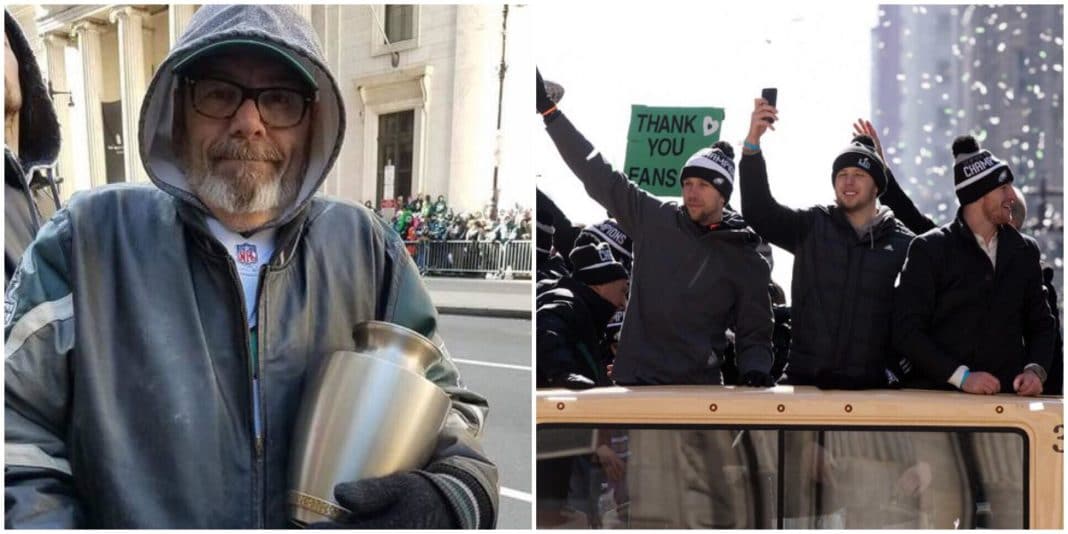 Four days after the Philadelphia Eagles won Super Bowl LII, millions from the City of Brotherly Love came out to honor and celebrate their victorious team. This is the Eagles’ first Super Bowl win. And they owe it to quarterback Nick Foles.

Among the parade attendants was a man who quietly carried his late wife’s ashes through the crowd of fans. While looking for the perfect spot to allow him the best vantage point of the parade, Dustin Javier went to stand in front of City Hall. He learned the name of the man with the urn was named Dennis; his wife’s name was Becky. She would’ve loved to have seen her favorite team bring home the Lombardi Trophy.

“She was a diehard Eagles fan,” Dennis said, according to a viral Facebook post shared by Javier after he heard Dennis’s story. “I had to make sure she was here for this.”

The two men chatted for a bit until a police officer approached Dennis and handed him a beer. The cop pointed to a group of around 12 men across the street.

“The officer then let him know that it was from the fans across Broad Street when they raised their beers when he looked over. Dennis was pretty happy about it,” Javier, 41, tells PEOPLE. “He was  standing a little in front of me, so I didn’t see how he emoted about it, but from his voice, it  sounded to me like he reacted rather jovially to their gesture.”

Witnessing the special moment was especially touching for Javier: “I lost my mother recently. While she wasn’t the biggest Eagles fan, I wish she  could have been here for this as well.”

This is Dennis. He was next to me at the Eagles Superbowl Parade. He's carrying with him the remains of his wife, Becky….

The parade stretched for five miles where over two million fans cheered and celebrated their football team as they greeted them from atop double-decker buses.

Javier will always remember this day, but not just for its significance in sports history: “It definitely was one of the best parts of my parade experience,” he says. “Sure, seeing our  heroic players come by and cheering them on for finally bringing the Lombardi Trophy to  Philadelphia was fun and all, but experiencing first hand that kind of camaraderie among the fans  is really what that day is about and what being sports fans is really about.”

What a kind gesture those men did for Dennis. What a way to show respect for a total stranger.