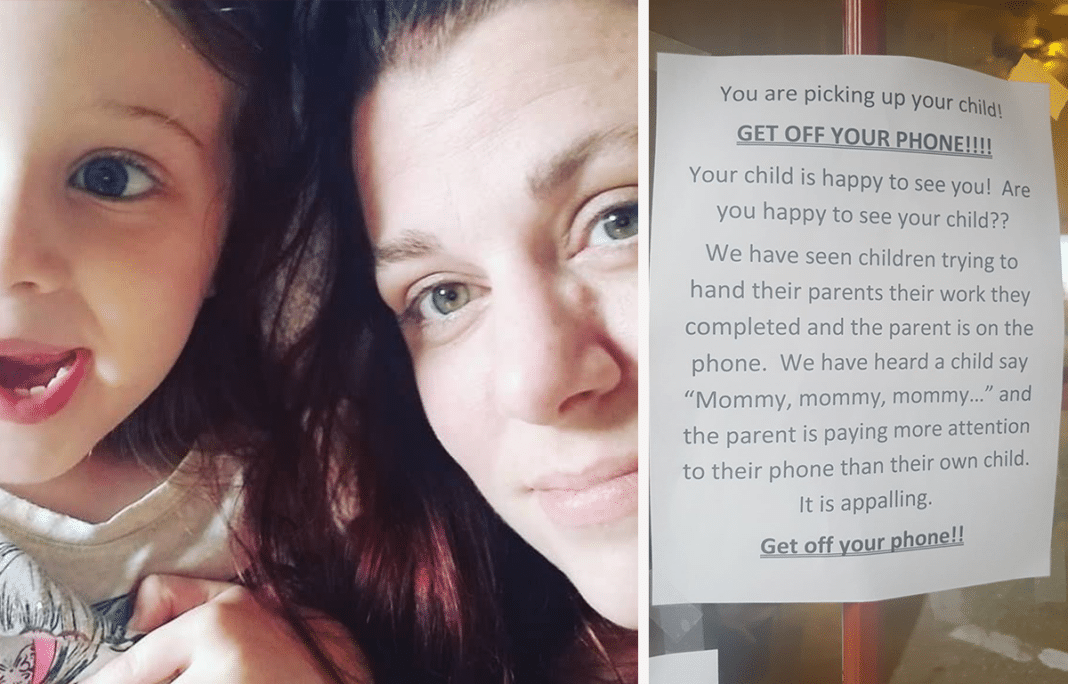 Our culture has certainly changed since the smartphone. The average adult spends over three hours and 48 minutes every day on computers, tablets, and smartphones. We spend even more time watching TV. Sometimes it is really disconcerting to see just about everyone with their nose pointed at a cell phone, even when they could be spending quality time with friends or family.

It would be impossible not to notice how often the people around us prefer to look at a phone rather than interact with others. But surely they would pay attention when they haven’t seen their own child all day, right? Well, the staff at one daycare outside Houston, Texas were exasperated witnessing parents picking up their kids, too distracted by their phones to take notice of their own kids.

They posted a sign in the window designed to get the point across and possibly get the parents to snap out of the spell of the smartphone.

“You are picking up your child! GET OFF YOUR PHONE!!!! Your child is happy to see you! Are you happy to see your child?? We have seen children trying to hand their parents their work they completed and the parent is on the phone. We have heard a child say “Mommy, mommy, mommy…” and the parent is paying more attention to their phone than their own child. It is appalling. Get off your phone!!” 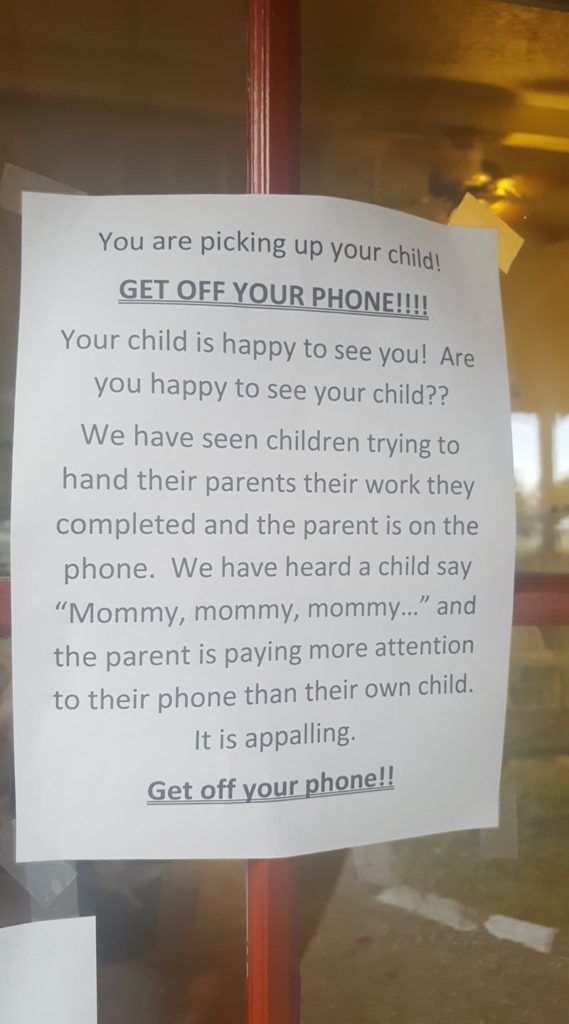 In this culture of “The customer is always right,” this was no doubt a big shock to some of the parents, but one parent thought it was a good reminder. Juliana Mazurkewicz posted a picture of the sign on Facebook and commented:

“I thought it was pretty funny and relevant,” said Mazurkewicz. “I’ve seen parents on the phone picking up, but not to the extent that the staff does, I’m guessing.”

She noted that the daycare had good intentions for the kids:

“I think that it needed to be said, that it’s a good reminder to all of us. The daycare is awesome, they are very loving and obviously have the best interest of the children in mind,” she said. “Their business IS our children.”

The post seems to have just about broken the internet, with over two million shares and over 12,350 comments. Clearly, what these daycare workers had to say resonated DEEPLY with the public. There are still people commenting on this viral thread today after its original posting in January 2017.

As with most things on social media, it sparked a wide range of opinions and commentary. While many people expressed their agreement with the tone of the sign, other saw it as “parent shaming.”

On the one hand, a person commented:

“If you can’t figure out your kid means more than a phone you should be sterilized.”

And on the other end of the spectrum:

“How about mind your own (bleeping) business?”

But this daycare is in the business of caring for kids, and it clearly really upset them to see parents not giving their kids a heartfelt welcome with their full attention.

Another person suggested a different approach to achieve the same goal:

“There is a proper way to say such things and this is just kind of…over the top. Why not just put up a regular “cell phone free zone” sign like most schools. This is coming off rude as well. And I’m a parent AND teacher.”

It turns out the daycare made a slight change to the sign for those who found it rude. They added a pink sticker at the bottom with a smiley face and the words:

A pink addition to the window sign via KHOU11 News

So maybe the approach was a rude awakening for some, but it’s still a good reminder that we might be a wee bit obsessed with our smartphones these days. Stop and smell the roses, and pay some attention to the people that really matter to us. ?

See the video from KHOU 11News below: