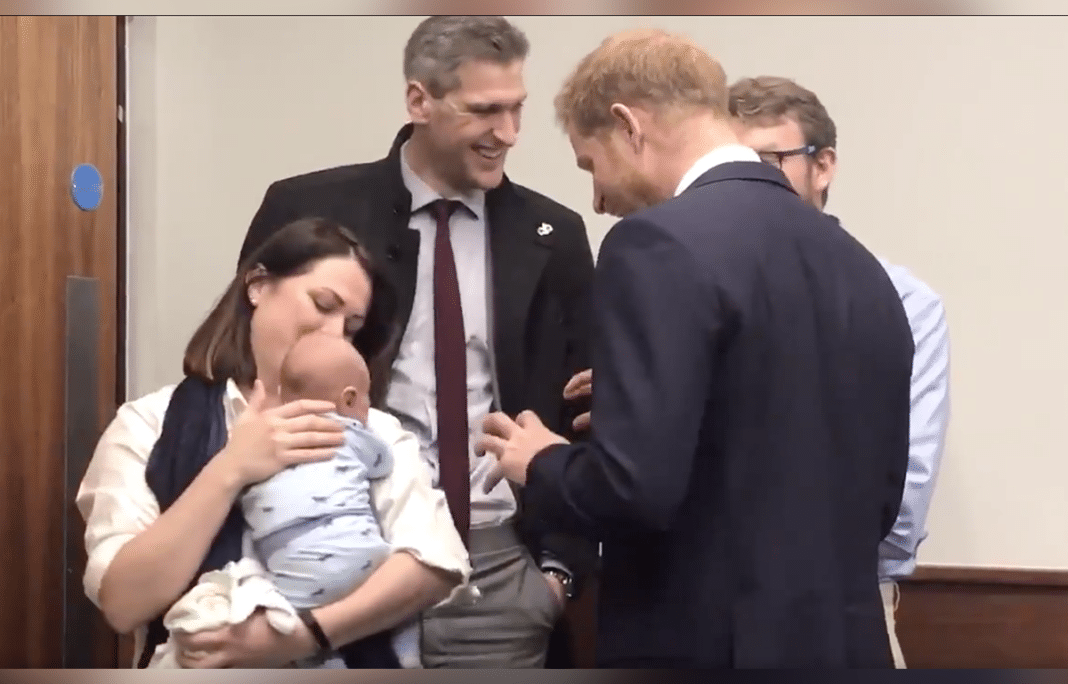 Prince Harry and Meghan Markle are expecting their first child this Spring. We can only imagine how excited millions of people will be to get the first glimpse of their baby. In the meantime, we got a look at what Harry might be like as a father when he arrived at Birmingham’s Queen Elizabeth Hospital to learn more about the work of the Scar Free Foundation, who are dedicated to helping people scarred by acts of terrorism.

The People’s Prince appeared to be a little nervous when he interacted with a five-week-old baby named James, whose father is J.J. Chalmers, reportedly a friend of Harry’s.

When Harry reacted as James let out a cry, Chalmers said:

Prince Harry reacted with a smile after doing a funny gesture with his hands and mimicking the baby’s cries.

He’ll undoubtedly be a very hands on dad when the time comes but Harry almost jumped when little James cried today! pic.twitter.com/y2axMiil91

Later in the day, Harry learned more about a new protein called Decorin used to help heal scar tissue. He was inquisitive and curious as he applied the thin film-like bandage to his hand. The dressing will be used to help armed forces personnel as well as civilians injured by terrorist attacks.

Showing HRH The Duke of Sussex the new biological treatments being developed @scarfreeworld. When the Duke touched the Decorin dressing he said ‘that’s amazing’ and wanted to know the timeframe for the innovative treatment to be used in medical practice @KensingtonRoyal @qehbham pic.twitter.com/5NbycvAxIg

On the way out of the hospital, Prince Harry warmly greeted the staff and well-wishers who were waiting outside in the dreary weather for his exit. One woman gave him a big hug as a delighted crowd shouted and filmed what happened with their smartphones. You can definitely see that Prince Harry is a mega-celebrity in the UK.

Can’t believe we saw fucking Prince Harry at work today and he hugged the nurses what an absolute angel pic.twitter.com/MOJCEaxaWn

Prince Harry learns about the work of the Scar Free Foundation https://t.co/PxEN8RIhwl

Another engagement for Harry in Birmingham today was to dedicate a memorial to 31 British victims of a terrorist attack in Sousse, Tunisia in June 2015. The modern sculpture at Birmingham’s Cannon Hill Park represents the lives of the victims as individual streams according to the Royal Correspondent for the Daily Mail, Rebecca English.

The memorial is also a remembrance for those killed in another terrorist attack at the Bardo Museum in Tunis on March 18, 2015.

Harry walked to the centerpiece of the memorial and laid down a single white rose. He addressed the family and friends of those who died in the attack.

“I would like to pay my deepest respects to you and officially dedicated this memorial to your loved ones,” said Harry.

Prince Harry spent time chatting with Suzy Richards (with son Owen), who set up fundraising charity #SmileForJoel to help victims of terrorism and murder after losing her father, brother and a son in the Tunisia attacks. They gave Harry a @Smileforjoel1 mascot for Baby Sussex? pic.twitter.com/HCJE93ZzJF

See more of Harry’s exciting visit in Birmingham below:

#PrinceHarry WAS IN BIRMINGHAM TODAY! ??? The Duke of Sussex visited Cannon Hill Park and the Queen Elizabeth Hospital Birmingham! pic.twitter.com/4WcOo3hNj7

After this morning's dedication ceremony for the Sousse and Bardo Memorial, The Duke of Sussex visited the Scar Free Foundation. More than 6,000 members of the British Armed Forces have been seriously injured or scarred in recent conflicts — the Scar Free Foundation centre at Queen Elizabeth Hospital Birmingham is a ground-breaking national facility that aims to minimise the psychological and physical impact. There, His Royal Highness met veterans and scientific and clinical experts spearheading new treatments. A decorin dressing, one of the new biological treatments being developed, was shown to The Duke, who said it was amazing and wanted to know the timeframe for the innovative treatment to be used in medical practice. When shown footage of a laser treating scar tissue His Royal Highness said “that’s incredible, it’s almost completely disappeared” describing results as ‘amazing'. Professor Diana Harcourt spoke to The Duke of Sussex about new research launched today to explore and minimise the psychological impact of scarring on armed forces veterans. In November 2018 The Countess of Wessex officially opened the new Scar Free centre, which is working to deliver scar free healing within a generation. Overall, The Duke of Sussex found out more about the Scar Free Foundation centre’s work piloting tailored psychological treatments to help seriously injured armed forces personnel cope with life with an altered, scarred appearance.

A post shared by Formerly hrhcambridgeands (@britishroyalladiesdaily) on Mar 4, 2019 at 1:15pm PST