Customer Asks If She Believes In God, Hands Her Note. When She Reads It Instantly Breaks Down In Tears 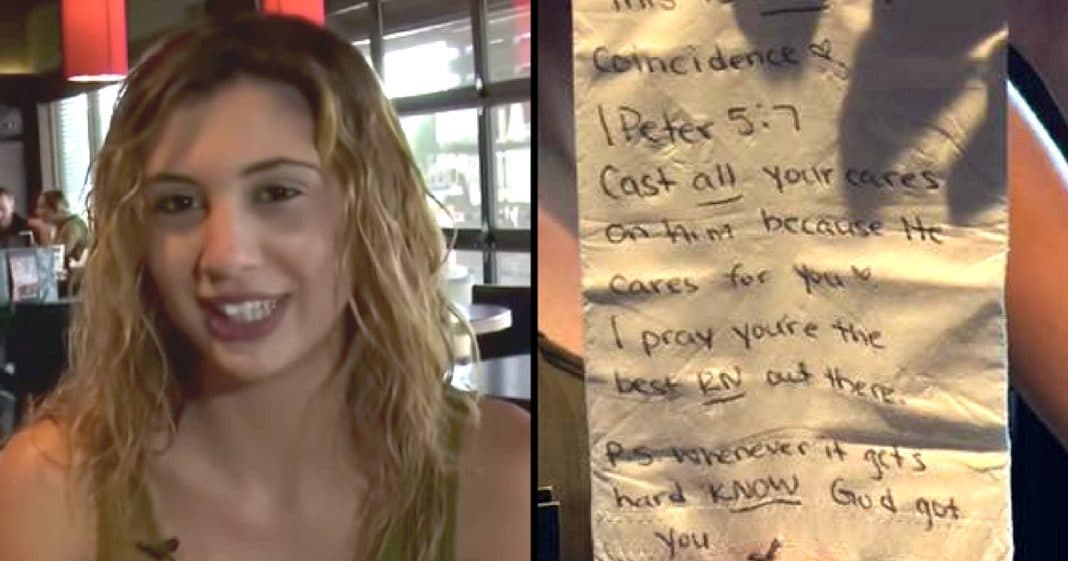 Brianna Siegel learned firsthand that all good gifts come from above. The day started out like most other days, but it was about to unfold into a true blessing.

Siegel was waitressing at Bar Louie in Woodbridge, New Jersey, when she struck up a conversation with a couple who had come in for happy hour. They talked about a lot of things and Siegel mentioned she had plans to be a nurse.

Before they left, the couple asked her a question that caught her off-guard. They asked if she believed in God.

Siegel answered yes and then the couple handed her an envelope with the instruction to wait to open it until later. Siegel assumed it was a prayer card. She went about the rest of her day and almost forgot about it.

But when she got home from work that night she remembered the envelope and opened it. When she saw what it contained she instantly broke down in tears.

Inside the envelope was a check for $1,200 along with the scripture 1 Peter 5:7 – “Cast all your cares on Him because He cares for you.”

“God cares for you. This is not a coincidence,” the rest of the note read. “I pray you’re the best RN out there. P.S. Whenever it gets hard know God got you.”

Since that day Siegel has been quizzed about every detail of the meeting. She said the couple had only ordered about $20 worth of food and were very nice.

“I was talking to them, they were really nice people. We were laughing,” Siegel recalled.

Brent Ruhkamp, the restaurant’s general manager, couldn’t be happier for her. “She’s always willing to come in,” he said. “Always willing to help out. She’s a great worker for us.”

“There are true caring people out in this world,” Siegel said. “They want to help me and they don’t even know me.” She said she plans on putting the money toward nursing school.

The couple who gave the gift wishes to remain anonymous to the public. They said the money was a gift from God and God led them to give it to her.

Were you touched by what this couple did for this deserving waitress? So share this!