Couple Returns Home After Hurricane Irma To Find Note In A Bottle, Then They Realize Who It’s From 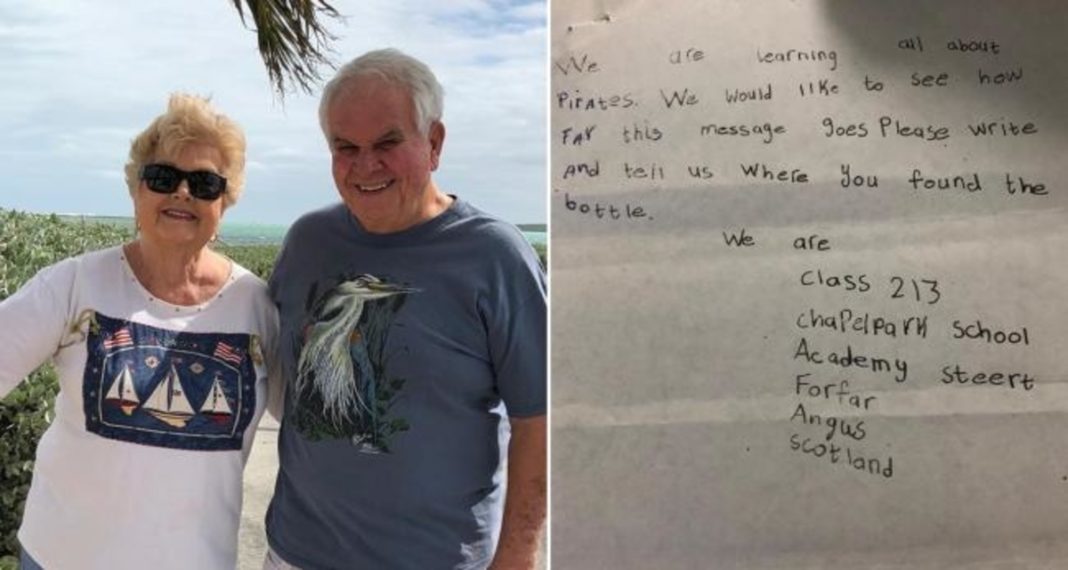 They started collecting trash and debris as they often do. They discovered a plastic bottle along with some other garbage near a fence.

The liter-sized bottle appeared frosted. They could see the corner of a piece of paper inside: “We’ve always picked up bottles,” Lee Huenniger told InsideEdition.com. “We’ve beach-combed before even when we were kids… you always hear and read about a note in a bottle. Well, we always kind of  check and this time there was a note in the bottle.”

The bottle appeared clean. It was free of sea life. This led Lee to believe that it wasn’t very old. It came from an elementary school from Scotland.

The note read: “We are learning all about Pirates. We would like to see how far this message goes, Please write and tell us where you found the bottle. We are Class 213 Chapelpark School Academy Street Forfar Angus Scotland”

The message in the bottle was small and laminated. If such care hadn’t been taken with the note, it probably wouldn’t have traveled 4,400 miles or more it took to reach Florida: “It was amazing to see something that could really be from that far away,” Ruth Huenniger told  InsideEdition.com.

Curious, as many would be about this mysterious message, Ruth wrote a letter back to the address. She enquired to those at the school to let her know when the bottle was sent out to sea. A little over a month later, on November 2nd, she received a response.

A now retired teacher at the school, Fiona Cargill wrote back, telling Ruth it was her class who’d written the notes. She stunned the couple when she wrote: “We forgot to put a date on the letter  but would you believe it, that bottle was set on its journey more than 30 years ago!!!”

“We really had no idea it was that old,” Ruth said.

Fiona said that the school, Chapelpark School, Forfar, had closed in 2008. It was being renovated into apartments. With her letter, the former teacher included a picture of her students who were dressed as pirates.

She revealed how one of the five bottles was sent out to see: “A fisherman from  Arbroath (17 miles from Forfar) put it in the North Sea, off the coast, to give it a chance to be  carried out to sea.”

The first of the bottles came to shore in the Faroe islands about a month after being sent on its journey. It traveled just 500 miles.

Fiona was contacted by Whitehills Primary, the school in the former school’s place. Administrators there were the ones who received Ruth’s letter.

Fiona reached out to local media and news outlets, passing along the incredible story of the message in a bottle found in Florida.

Since then, three of her former students have reached out to Ruth: Alisdair Moug, Scott Allen Shepherd and Laura Millar. Oddly enough, the three can’t recall which one of them is the actual writer of the message. They were just 7-years-old at the time.

“I can remember having a dress-up day to celebrate what we had been learning about pirates,”  Laura, 39, told InsideEdition.com. “I can remember speaking about messages in bottles and that we  had written one.”

Alisdair, now 39, didn’t even recognize himself in the class photo holding up a sword, but his sister did.

“It’s such a strange thing to hear that something you did as a project in primary school as a 7-year-old has turned up 30 odd years later,” he told InsideEdition.com.

For Ruth, “It feels really exciting to know somebody in Scotland or several people in Scotland.”

There are still three bottles out there just waiting to be discovered: “Who knows?” Alistair said. “They could end up anywhere maybe on another 30 years someone will find  another one.”

The Florida couple, who have been married for 37 years, are thrilled with their discovery. So is Laura: “It’s quite amazing to know that it was found after all that time,” she said. “I don’t think anyone can believe it.”

Meanwhile, Lee says ruth keeps asking him when they’ll be taking a trip to Scotland. I don’t blame her! With people to meet, I’d want to go too.