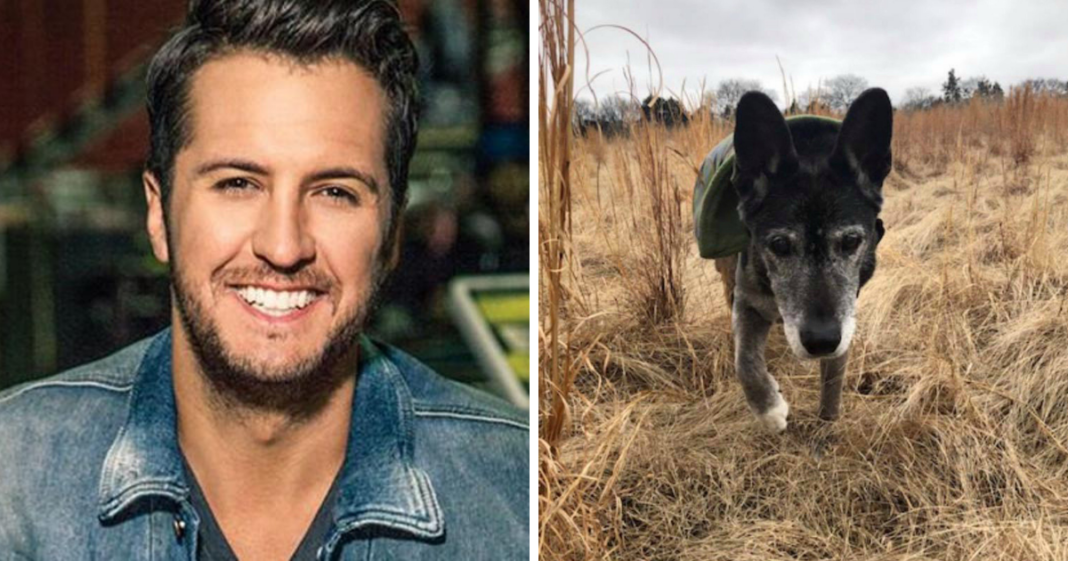 A heartbreaking update to this story:

On Feb. 20, Caroline Bryan made an announcement on Instagram that the senior pup had died. She started off the sad post with an all-too-appropriate quote.

“‘If the kindest souls were rewarded with the longest lives, dogs would outlive us all,’” it read. “My heart is sad but full to post this.

“Our sweet Prince Poochie has passed away. He lived 18 years and was loved by so many people.

“My kids especially loved to hear him snore when he slept! Thank you @proverbs1210animalrescue for giving our family the opportunity to love this sweet dog.”

Even though it was short lived, we are so grateful he got some good food and lovin’ from the Bryans before he made his journey to the Rainbow Bridge. RIP, Poochie!

A senior Aussie mix named Poochie reached the ripe old age of 18. A dog reaching 126 in dog years is one lucky dog, but then Poochie had some unexpected bad luck. His family surrendered him to a shelter after all those years. As tragic as that sounds, it turns out Poochie is, in fact, a very lucky dog after all.

Enter Proverbs 12:10 Animal Rescue in Nashville, Tennessee, an animal rescue group based in Middle Tennessee. Their name derives from the verse that states, “The righteous care for the needs of their animals, but the kindest acts of the wicked are cruel.”

The rescuers went to pick up a very distressed Poochie to take him on his “freedom ride” and bring him to safety from the local shelter. The confused dog cried as he sat huddled in the car seat. Rescuer, Lavonne Long Redferrin said:

“I think he is nervous. His whole world has been turned upside. He is getting a full medical evaluation shortly, though.”

“I just think of how I would feel if all I had ever known vanished.”

“We pulled 18-year-old Poochie from a shelter after his family surrendered him due to becoming allergic. We often step in and pull seniors, sickly and injured animals who are likely to be overlooked.”

The thought of a pet abandoned at such an old age is truly sickening. How could they suddenly become allergic after all those years? Well, according to some comments on the group’s Facebook page, it appears the family may have a new baby who was allergic. If that is the case, it makes much more sense.

Whatever the case may be, Poochie’s life changed forever. Fortunately for him, there were people like Redferrin who were looking out for dogs like him. Without her, his life might have taken a truly tragic turn. The rescuers decided that Poochie would become a forever hospice foster. He would get a second chance to live out his days in comfort.

That sounds lucky alright, but that’s when Poochie seems to have really turned up the charm to full blast. Country music singer Luke Bryan saw him online living with his foster family. Bryan and his wife, Caroline were smitten and knew they could provide Poochie with the best life possible. They sent in the application with “impeccable” references, and the senior dog’s life changed again.

Happy Mother’s Day to the best mama in the D worlds.

Poochie went to live on the Bryans’ Tennessee farm, where he would be surrounded by other lucky animals, including other dogs as well as goats, chickens, cats, and turkeys.

And I love this crazy one most of all! @lukebryan ps…we ♥️ Big Al too ? Happy Valentines everybody! Do something naughty. ?

The rescuers realized that this happy ending sounds so perfect, it might make great lyrics for one of Luke’s future songs. They posted the story to Instagram and Facebook:

“After reading about Poochie on our social media, Luke Bryan and his beautiful wife, Caroline applied and adopted Poochie this past Saturday! He is pictured here with his new mom, Caroline and his previous foster, Lacy Marie! He is loving life on the Bryan farm and soaking up all their love. Who knows, maybe Poochie will inspire a country song! ThanksBryans!#CherishTheOldForTheyAreTreasure”

Following Poochie’s adoption, Caroline Bryan updated the rescuers on how he was doing and they reported:

“We are so thrilled for Poochie and know he is in great hands. Caroline Bryan has graciously given us updates on our sweet boy. Their adopting this sweet old guy will allow us the chance to save yet another,” the rescue’s founder said, adding that she knows “there is a song somewhere in this story.”

Now Poochie is living in the lap of luxury for the remainder of his days.

See more from Wochit Entertainment below: