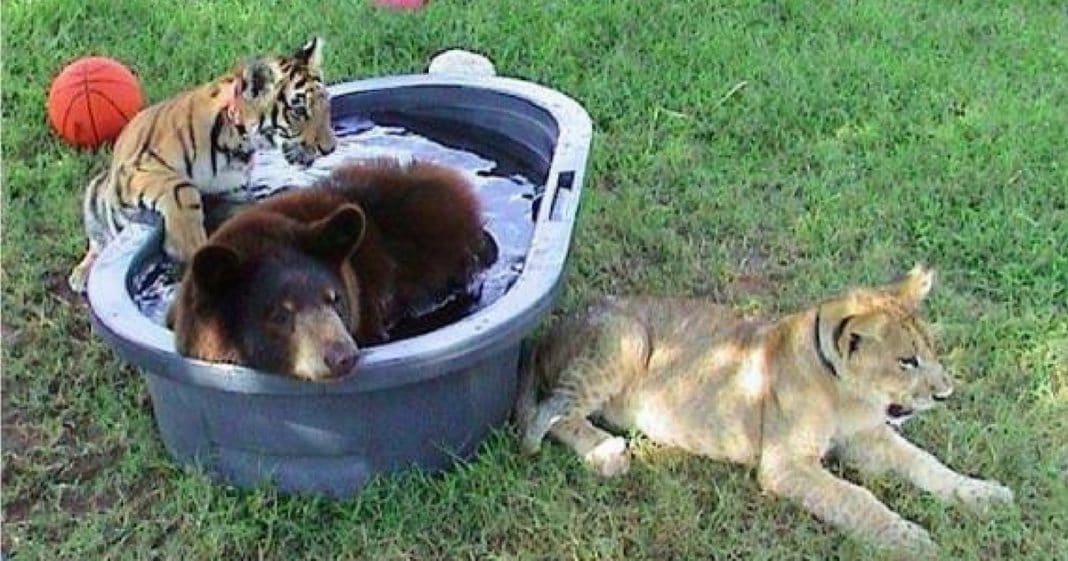 Lions and tigers and bears, oh my!

You may have heard of blended families, but in human terms, when you have a blended family they are from the same species. Check out this unlikely trio that normally in the wild would not get along. Actually, these exact types would not even see each other in the wild.

All three of these beautiful animals were rescued from terrible conditions as youngsters when they had been forced to live in a basement. Now see their transformation after living at Noah’s Ark Sanctuary in Georgia for 12 years.

Nicknamed BLT for bear, lion, and tiger, the trio maintains a tight bond. The American black bear is named Baloo, the African lion is Leo, and the Bengal tiger is named Shere Khan.

Noah’s Ark Sanctuary’s founder explained that a hierarchy does exist among the three. Baloo is the boss, Leo is second, and Shere Khan falls in at number three.

Shere Khan is the playful and silly one. When nap time comes around, all three will pile in a little club house. They obviously like and know each other well.

The three were confiscated as youngsters because they were being kept illegally as pets in a dark basement. When they arrived at the sanctuary, the tiger and lion’s noses were injured, visible scars that they carry still.

When they arrived at the sanctuary, the founder tried to separate them, but would give in when they cried for each other. Being just infants, she’d put them back together and the crying would cease. They were so close that the bond and living arrangements became permanent.

This just goes to show that family is knit tight by relationships and not just sharing the same blood and DNA. Enjoy this adorable and heartwarming video!

Were you amazed by this unlikely friendship? So share this!