Cop Spots Dog Being Dragged Under Car On Busy Highway, Then He Realizes Pinned Pup Is Still Alive 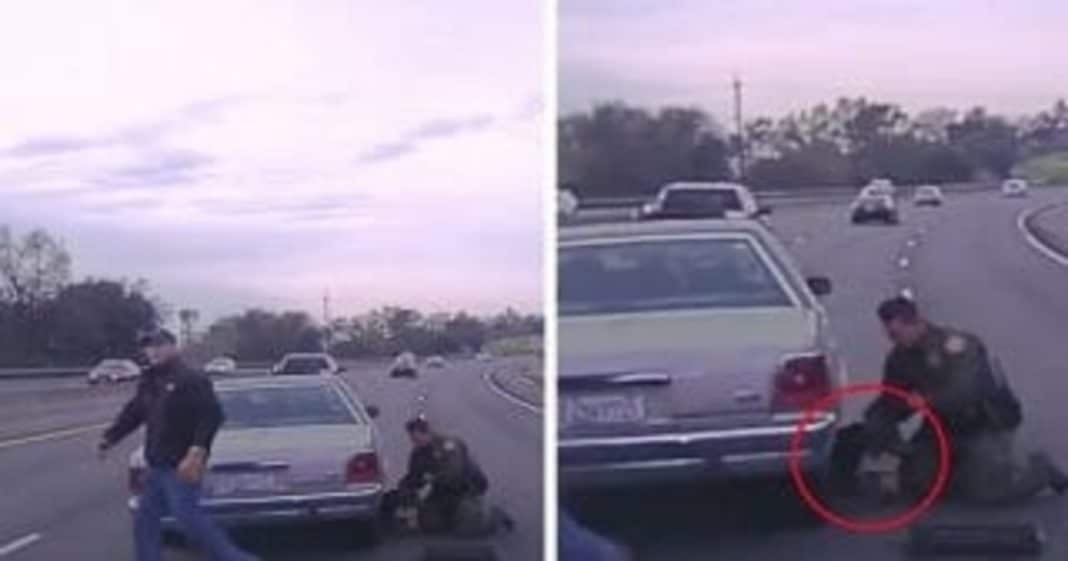 Dogs often manage to break out of their yards and roam free. It doesn’t matter how they escaped; it’s tough seeing a dog running on the side of the road. Who do they belong to? These forlorn and sometimes frightened animals can leave us baffled as to how or when to approach. To them, we’re either a friendly face or someone to fear.

In those instances where the dog would possibly respond with fear and mistrust, it’s best to not get too close unless you have the correct training to calm the poor animal down.

Sheriff’s deputy, Stan Semenuk, has experience as a dog handler. He found himself in quite a sticky situation one day while on the freeway.

He observed a loose bloodhound puppy clear one side of the freeway. Watching any animal dodging traffic would make any healthy driver anxious. Of course, they don’t want to be the one who strikes it. However, when you’re traveling too fast and with the flow of traffic, you can’t always stop on a dime.

Semenuk kept the dog in sight. It continued across the freeway. He wanted to see if he could prevent the pup from getting hurt: “I immediately pulled over and tried to help the poor buddy out,” he said. “I started calling the little guy over to me. He was just scared out of his mind.”

The pooch only saw Semenuk as something to be afraid of. He lit across the remaining lanes and was struck by an oncoming vehicle.

If you’ve seen this unfortunate event or been involved in it directly, you know the sheer terror and agony that can curl in the pit of your stomach. Mixed with the sickening sensation of what’s just happened is a kernel of hope that the sick animal will be all right.

Many times, they aren’t. Fortunately this little guy was a fighter. He was dragged for a bit before the driver could stop. Semenuk used his car as a buffer, parking it behind the vehicle that hit the pup. The wounded pooch lay trapped beneath it.

The California deputy wanted to secure the scene for not only himself but for the dog and others driving past. He was familiar with the needs and behaviors of dogs. If he responded incorrectly, he could cause the pup further accidental injury.

Semenuk noticed the hound’s foot was pinned under a wheel. This could’ve saved his life. If he would’ve been able to rush back into traffic, there’s no guarantee he’d make it without being hit; this time fatally.

An off-duty CHP officer passing by also saw the commotion. He stopped to help. With a jack he kept in his vehicle, the men lifted the car from the dog.

K-9 handler or feline handler? Which is it, Deputy Semenuk? Don't tell Semenuk’s K-9 partner Ronin, but this sweet cat…

“I was just talking to the little puppy, trying to calm him down because he was crying and whining and in a lot of pain,” said Semenuk.

They secured the dog with a leash. Semenuk then lifted the injured pup in his arms and carried him to the side of the road. He waited there with him until animal control arrived.

Warning: Video content may be disturbing to some viewers; however, it is not graphic or bloody and there’s a happy ending! A Placer County Sheriff’s deputy and an off-duty CHP officer helped save a dog in a harrowing freeway rescue Wednesday morning. At 8:15, the sheriff’s K-9 handler, Deputy Semenuk, was driving on westbound Highway 80, east of Penryn, when he saw a bloodhound run across the eastbound lanes of traffic, jump over the center divider, and continue to run across westbound lanes of traffic. Commuter traffic came to a screeching halt as motorists tried to avoid hitting the scared dog. Semenuk immediately pulled over and began to slow down traffic while attempting to call the young bloodhound over to him. The dog seemed scared and confused and ran back into the westbound lanes, where unfortunately it was hit by a passing car. It was pinned underneath the car, its paw under the rear tire. Thinking quickly, the two decided to lift the car off the dog using a floor jack from the CHP officer’s truck. Semenuk repositioned his patrol car for safety reasons, then calmed the distressed dog and continued to lift the car. Using his leash to create a makeshift collar, Semenuk was able to remove the dog from underneath the tire. He kept the young bloodhound calm and comfortable on the side of the freeway until Placer County Animal Services transported him to Loomis Basin Veterinarian Clinic for emergency medical treatment. The dog’s owner showed up as the dog was being loaded into the truck. We are happy to report that the veterinary clinic said Ruger was in stable condition as of Wednesday night, and is expected to fully recover. He has no broken bones, just lacerations and road rash.

The chaos caught the attention of the dog’s owner who lived near the freeway. The hound’s name is Ruger. He dug a hole in his owner’s yard and broke free. Ruger’s owner accompanied him to the vet. Ruger’s doing well thanks to Semenuk and the CHP officer.

“That’s what we do. That’s our job,” Semenuk said, marveling over the response his actions have accrued. “Seeing a dog get hit like that, it’s not an easy thing. But I would have done that for  any dog.”

If I were Ruger’s human parents, I’d find a way to ensure he could never escape their yard again. Poor Ruger could’ve died.