Cop Poses For Beautiful Christmas Photo With His Family, No One Knew It Would Be Their Last 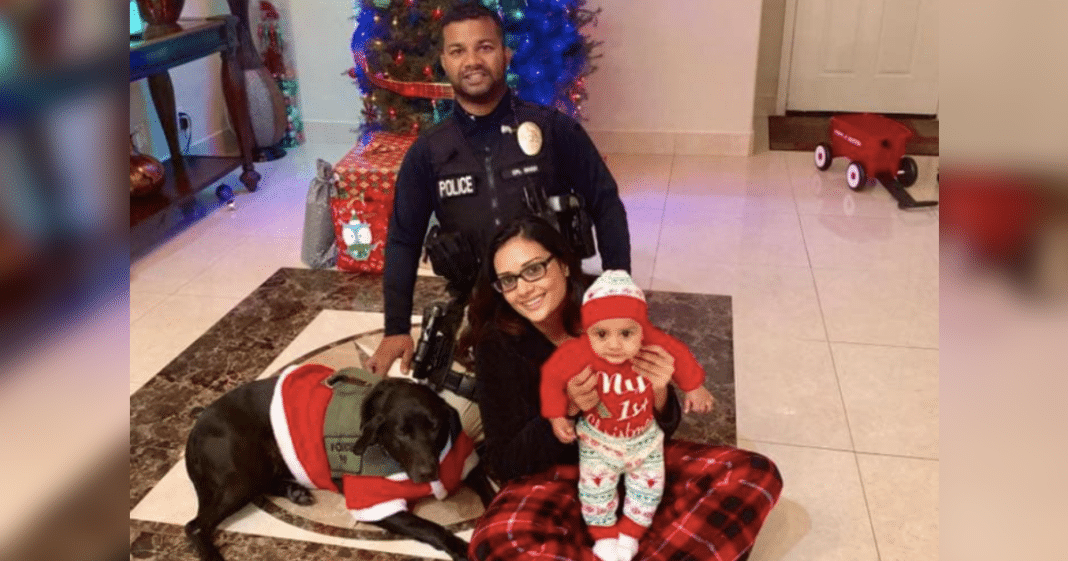 The Modesto Bee has reported that a brave police officer was shot and killed during a routine traffic stop just after midnight on Wednesday.

Tragically, Newman Police Department Cpl. Ronil Singh and his family took this beautiful family photo together five hours before he was shot, not knowing it would be their last. 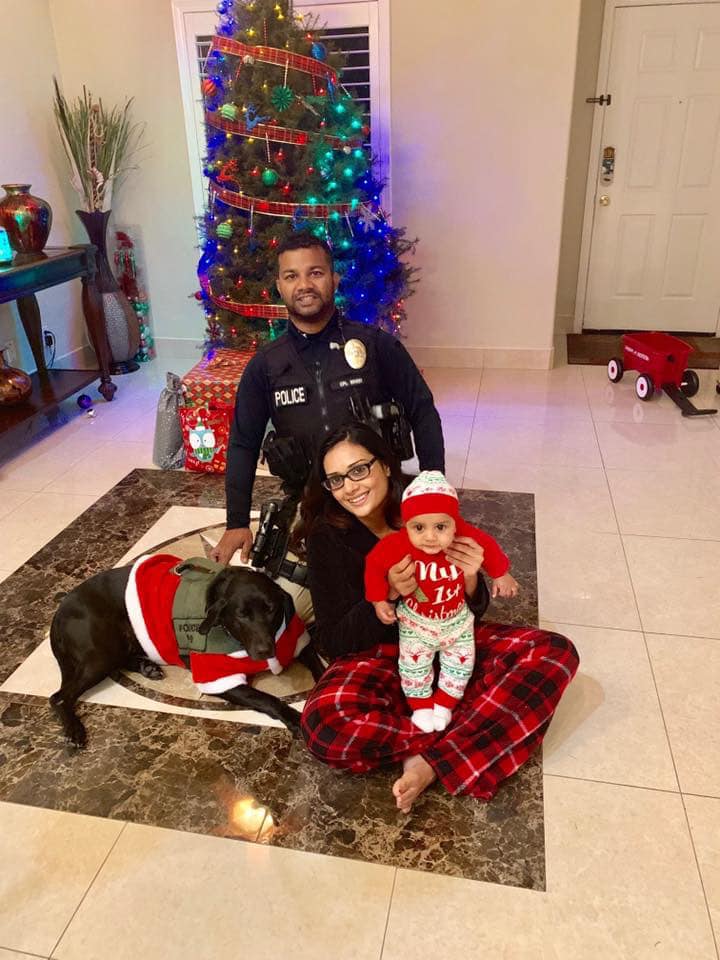 This poor family took this amazing Christmas photo last night, unaware it would be their last together. Officer Singh would be shot and killed 5 hours later. Prayers for the Newman Police and their families.

A Blue Alert is still Active in Calif. As the Suspect is still At-large pic.twitter.com/WX40nnIMiH

According to his uncle, Cpl Singh was working overtime on Christmas night to provide the best for his family.

My adventurous nephew. Lived life to it’s fullest in just 33 years. My family’s Action Hero Honorable Ronil Singh. Working overtime on Christmas Night to provide the best for his family.

He described his nephew as an “adventurous and beautiful soul.”

“A very adventurous and beautiful soul, taken away too soon. He leaves behind wife and a 1 year old son. He was a great role model for our next generation of Indo Americans. Dang! He’ll be missed.” 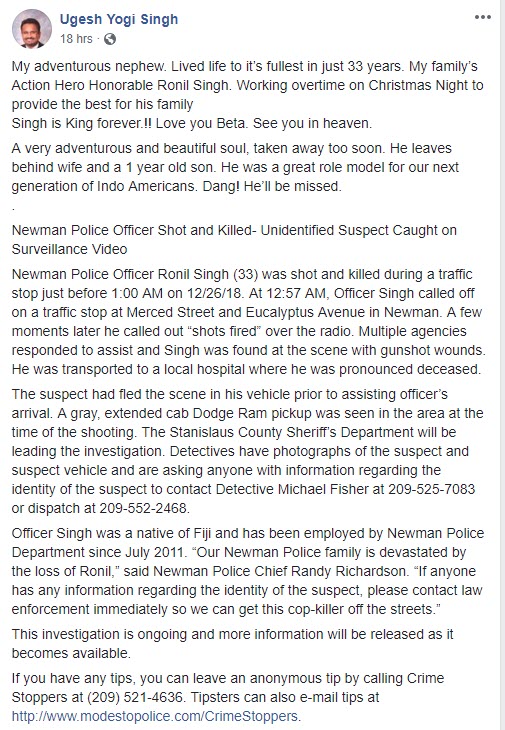 Newman Police Chief Randy Richardson said this in a statement from the department.

“Our Newman Police family is devastated by the loss of Ronil.” 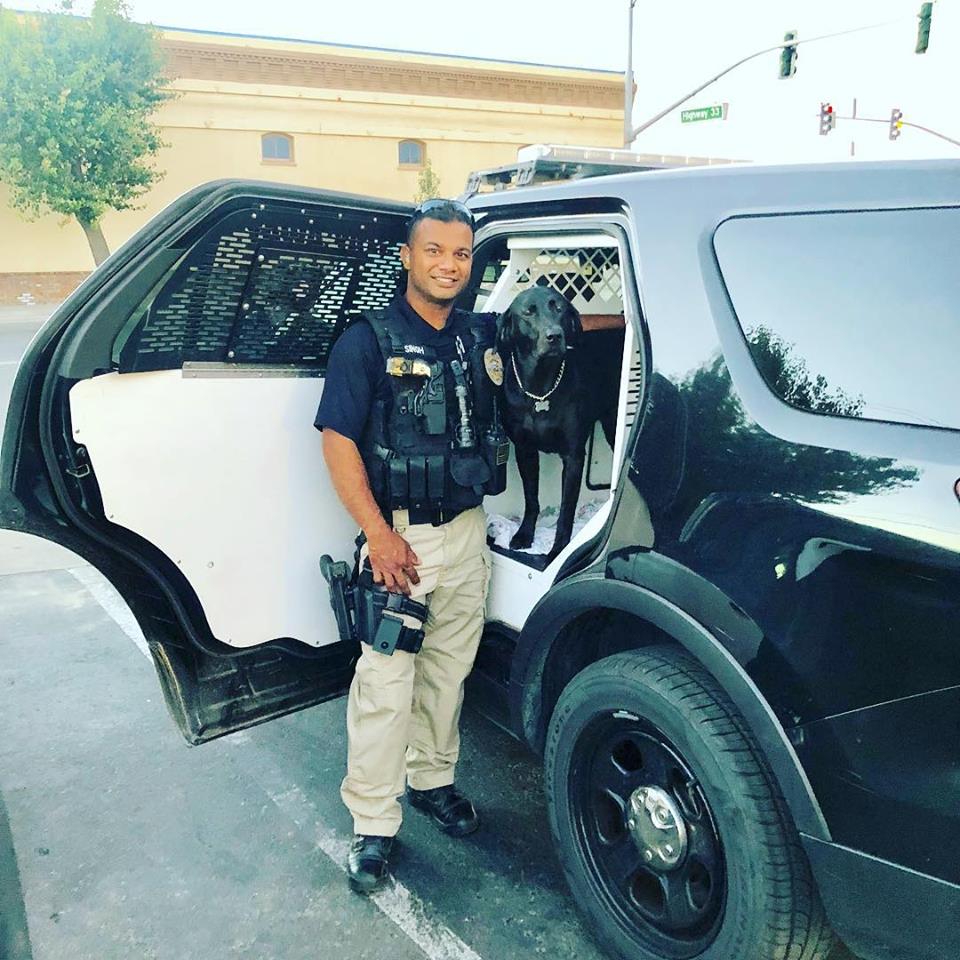 California Gov. Jerry Brown has directed flags be flown at half-staff in Sacramento at the Capitol to honor Cpl. Singh. The Governor also released this statement:

“On behalf of all Californians, Anne and I extend our condolences to Corporal Singh’s wife, young son, loved ones and colleagues. Our hearts are with the entire community of Newman and law enforcement officers across the state who risk their lives every day to protect and serve the people of California.”

Ronil Singh was a native of Fiji and had been working with the Newman Police Department since July 2011.

“Ronil was a good man who started his career with the TPD as a cadet,” said Turlock Police Chief Nino Amirfar in a release Wednesday morning. “His dream and desire was to be a police officer and to be there to serve his community. He chose to be the light in the darkness and to do so without hesitation. We are all devastated and are in mourning. He was loved and will always be in our hearts.”

The investigation is ongoing. Anyone with any information should contact the Newman Police Department via the following:

If you have any tips, you can leave an anonymous tip by calling Crime Stoppers at (209) 521-4636. Tipsters can also e-mail tips at http://www.modestopolice.com/CrimeStoppers, or text them to CRIMES (274637) by typing “Tip704” plus the message and be eligible for a cash reward

A tragic ending to a beautiful night with family. It is such a blessing that the family has this beautiful family photo of their hero with the people he loved.