Cop Follows Frantic Dog Down Street. Then He Realizes Where He’s Going 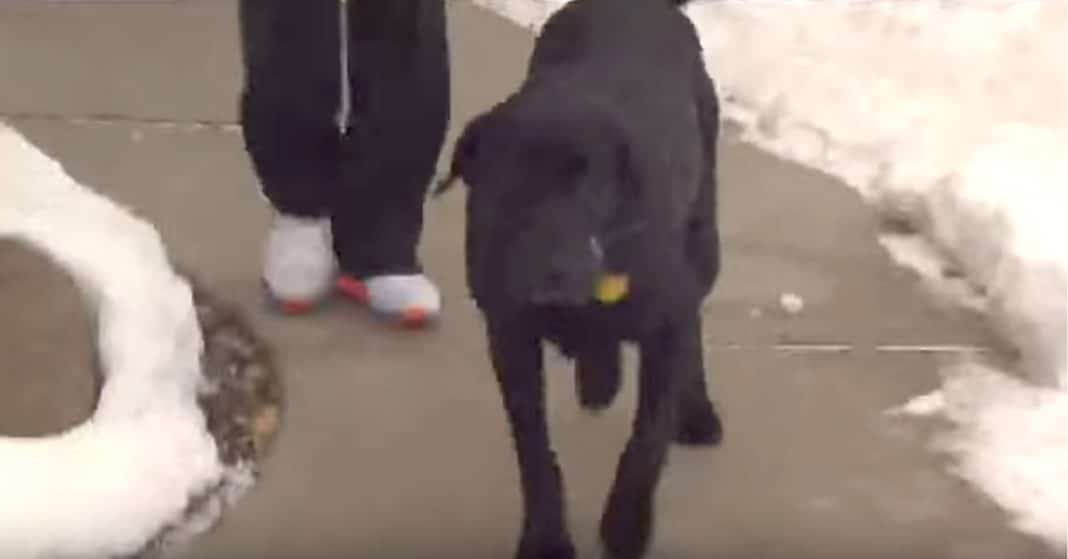 I’m partial to Labradors. I had a sweet black Lab named Tess in my life for over 10 years. She was not only my guide dog, but my companion. Tess and I walked around college campuses and in the city. She took me safely from curb to curb as we crossed the street. She found stairways, ramps, and doors with ease.

Tess had a personality all her own. She loved to play and have fun. I couldn’t eat carrots or apple slices without sharing them with her – she wouldn’t let me!

She also always kept a watchful eye on me. Puddles of water led from her water bowl down the hallway to the doorway of whatever room I was in. Tess had to make sure I was all right.

Labs are loyal and adoring. They merely wish to please their owners.

John Boy is a sweet black Lab who had some trouble finding a permanent residence. He had been to three previous homes before finding his forever home with Krystal Lauer in Germantown, Wisconsin.

While on duty one day, Germantown police officer Jeff Gonzalez was driving down County Line Road when he saw a frantic John Boy running around barking, trying to get the attention of anyone who would listen.

“He stood there and barked a little bit, then I rolled down my window and called to him,” Officer Gonzalez recalled. “Then he wagged his tail and got more friendly until I got out of my car. And then he ran a little bit.”

“He pointed me in the right direction,” he said.

Gonzalez followed John Boy and the pooch led him straight to the front porch of his home. There, slumped in a chair, dressed in her pajamas, and completely unresponsive, was John Boy’s owner, Krystal. She had been sitting in the 3-degree weather for what Gonzalez estimates was about an hour.

The officer explained his reaction to seeing Krystal: “To be honest with you, I thought she was dead,” he said. “And when I went up, she was very cold to the touch; her lips were blue. But I was able to determine she was breathing and had a pulse. I called for assistance, and my partner was close. So together we got her in the house.”

Thankfully, after getting her to the hospital, doctors were able to revive Krystal and determine that she would be okay.

“They thought that she was dead,” said Tianne Wendt, Krystal’s daughter. “It was a miracle. My mom had two angels save her that day.”

Gonzalez says he doesn’t wish to be called a hero; it’s John Boy who deserves all the credit. This remarkable, loyal, smart, and adoring dog saved Krystal’s life.

Krystal remained in the hospital to undergo some tests and doctors determined she has a heart condition. Thanks to John Boy, she survived and is able to live another day.

I can’t fathom why John Boy’s previous owners returned him to the shelter. Perhaps they weren’t meant to be? Maybe John Boy and Krystal were, and that’s why John Boy didn’t work out with those folks. Who knows?

This intelligent, loving, and fabulous dog needs to remain with Krystal. He’s exactly where he belongs. He’s the hero who saved the day. Way to go, John Boy!

Do you agree that John Boy is a hero? So share this!