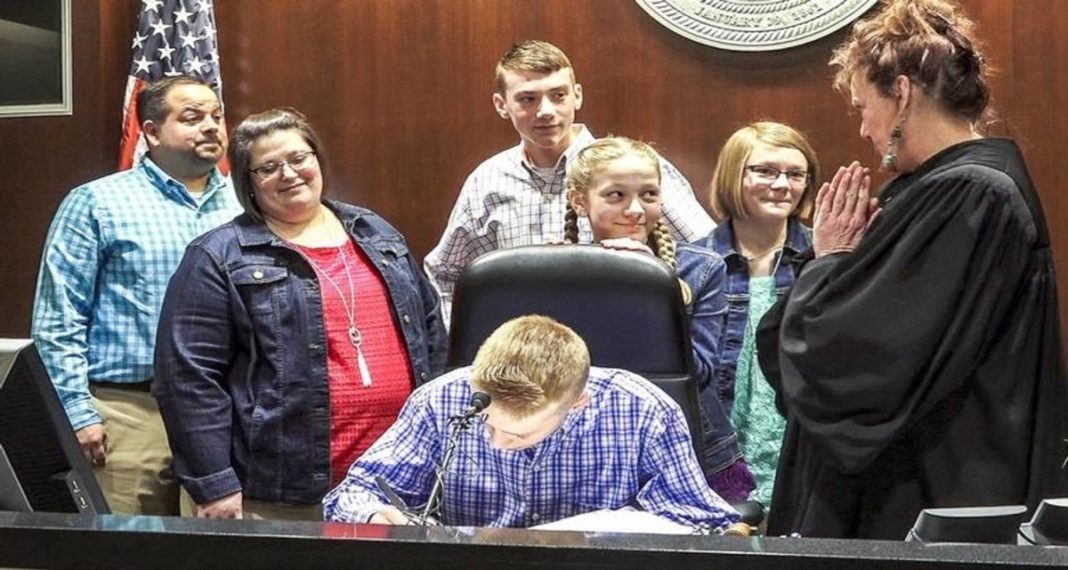 On a Wednesday in August 2015, Phyllis and Eric Watson received their licenses to become foster parents with the potential to adopt. The next day, an adoption agency called with their first case: four siblings, two boys and two girls, seeking a home where they could stay together.

The four children came from a home in Overland Park, Kansas where the marriage failed early and substance abuse followed. They endured neglect and abuse so bad the state took custody of them.

“We were thinking one foster child at a time. Maybe two? We weren’t thinking four at once,” said Eric Watson, youth director of Faith Baptist Church in Olathe, KS.

But Eric said he couldn’t bear the thought of the kids being separated.

“The turning point for me was they were going to be split up and I didn’t want to see that,” he said through tears.

Saturday rolled around and the couple had made up their minds: bring ’em on.

After the childless couple went forward with their decision, Phyllis Watson said, “we were a little shocked, afraid, I don’t know what to say. Scared?”

The couple bought a bigger car for trips to Culver’s Restaurant – where they all ate on their first day together, they even built a larger house to hold everybody.

Two and half years later, they made the adoptions official.

TOUCHING: Four siblings in the Kansas foster care system have all been adopted by the same family. "I love them like they are my own."

Judge Kathleen L. Sloan struggled to hold back tears as the new family filled six chairs in her courtroom, in what she called “the best hearing that any judge gets to have in the United States.”

“I order this packed courtroom to give the Watsons a standing ovation,” said Judge Sloan. The standing-room-only gathering of relatives, friends, and classmates erupted in applause.

“She’s been a mother to those kids since she was three years old,'” said Grandma Sue, who sat with the family at the court ceremony.

“They’ve had a hard life but they’re strong,” she added.

Had the Watsons not taken them in, the children likely would have been split into separate foster homes, officials said.

“It’s rare to see kids in the system, especially teens, find this perfect of an ending,” said caseworker Kiersten Stolxenberg of the adoption agency KVC Kansas.

“I really believe, honestly, that God’s hand has been all through this process,” said new dad Eric Watson.

Congratulations to the Watsons, we wish this new family of six a future filled with love, joy, and happiness!

Were you moved by this adoption story’s “perfect” ending? So Share This!