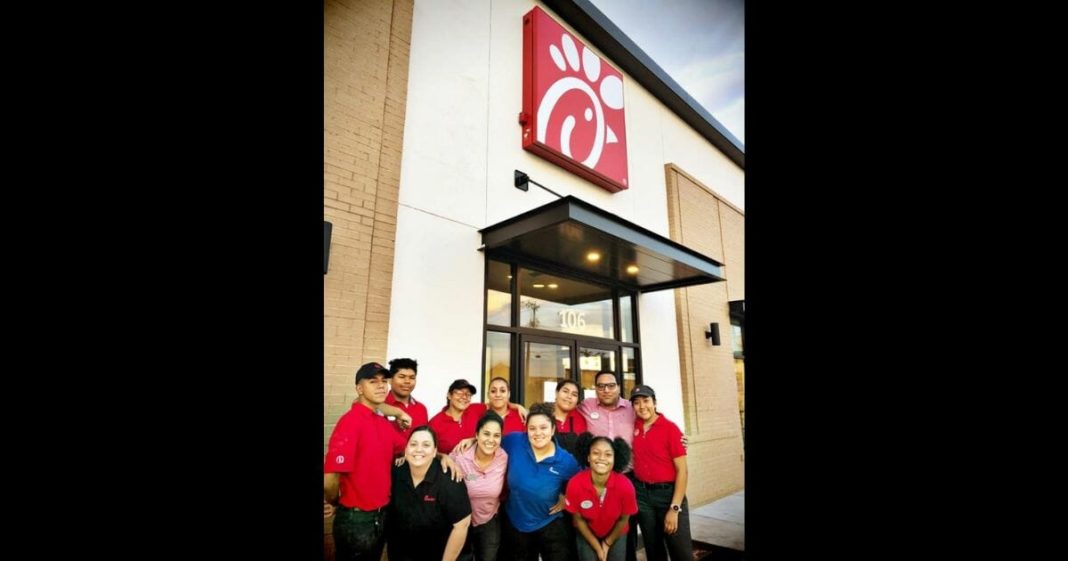 After a mass shooting on Saturday left seven people dead and rocked the West Texas communities of Midland and Odessa, first responders coping with the tragedy received some comfort from Chick-fil-A workers who made sure they had something to eat.

On Saturday, a man later identified as Seth Ator, 36, who had been fired from his job that day, opened fire on police officers in Midland after a traffic stop, then drove through Midland and Odessa going on a random killing rampage until police eventually contained and killed him in a shootout, CNN reported.

In addition to the seven fatalities, 22 people were injured in the attack.

Word of the incident soon reached the Chick-fil-A on University Boulevard in Odessa, prompting the restaurant to close early to allow families to be together.  The store also posted a message on Facebook explained what happened when the call came to help.

“Absolutely blown away by this amazing team of people. After heartbreaking events in our community today we planned to close early and send our team home to be with their families. As they were walking out of the restaurant an opportunity to feed local law enforcement presented its self and they were given the option to help…not one person said no,” the store wrote on Sunday.

Absolutely blown away by this amazing team of people. After heartbreaking events in our community today we planned to…

“Partnering with Chick-fil-A Odessa Town Center they cooked 500 sandwiches and packaged them with the most joyful hearts and a lot of love,” the post read.

“Sometimes light in a dark world looks as simple as a hot chicken sandwich. We just couldn’t be prouder of these helpers and their hearts of gold.”

The post also noted how the community was in the process of healing.

“Grateful is not an adequate word to express how we feel about all of our brave First Responders, they are true heroes. We are praying for our community in the days ahead and for all of those impacted by this tragedy,” the post read.

“My mother would always say, ‘Look for the helpers. You will always find people who are helping.’ To this day, especially in times of ‘disaster,’ I remember my mother’s words and I am always comforted that there are still so many helpers — so many caring people in the world.”

The store then added a follow-up post that read:

“The joy our team had in being able to help when everyone is hurting was tangible. There is power in kindness.”

Visitors to the store’s Facebook page applauded their commitment to the community.

“What a great company! All those kids won’t work at Chick-Fil-A forever. But the lessons they learn while they are there are invaluable. Thank you for setting the example. Many prayers for those affected and to the first responders,” wrote a user named Lori Hicks Ruyle.

One Facebook poster noted that this was the standard way Chick-fil-A’ operates.

“Thanks to all the selfless employees at Chick-Fil-A for thinking of and serving our first responders yesterday. You work for a great company, and I appreciate having Chick-Fil-A as part of our community. They never fail to come through when help is needed,” wrote Jan Brown.

And another person offered prayers of thanks and for healing.

“God bless these sweet and loving blessings to our community of Odessa-Midland,” Linda Bratton Pitkin wrote.

“West Texas has such truly good people who love God and each other. Thank you for recognizing a real need and lifting up our law enforcement. May God comfort the families who have lost loved ones and those who have been injured. Such deep sadness that only God can comfort. Prayers.”

Let’s all keep these communities in our prayers tonight. Please be sure to share this story with your friends and family.