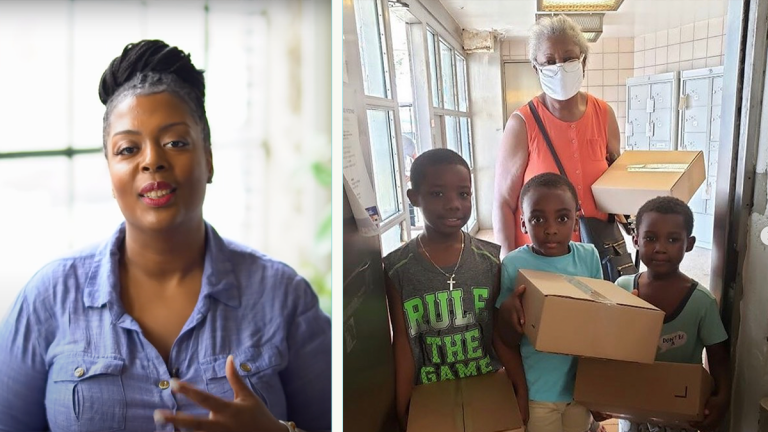 In late 2019, Chef Millie Peartree, 38, lost her thriving business in the Bronx, New York. Millie Peartree Fish Fry & Soul Food was featured in New York’s top 10 restaurants of 2019. Then, somebody messed with her gas lines, forcing an inspector to turn it off. The business had to shut down right before the holidays, and she was stuck with paying her lease.

Chef Peartree lived near the restaurant with her boyfriend and 13-year-old son. Traumatized and crying, she told the Times:

“I just wanted to cook fish and be here for my community.”

It would take months to get the gas working again, so Peartree had to tell her customers, “I’m sorry, my love. We’re closed, indefinitely.”

In the meantime, she tried to go back to working as a private chef in the catering world. Then, anther tragedy stuck: Covid-19. Sadly, the pandemic devastated the entire hospitality industry, and her catering ambitions were suddenly over.

“Are you serious? What now?” she asked herself, still confident she would bounce back.

From Tragedy to Feeding Thousands

Fortunately, Chef Peartree’s gifts would not go to waste. Her friend Laura Brown, the editor-in-chief of InStyle magazine, reached out with a fantastic idea. How would she feel about donating meals to the hungry on behalf of the magazine?

Chef Peartree jumped at the chance, and soon, Millie Peartree Catering had provided meals for 6,000 essential workers. Among those who received her nourishing meals were USPS workers and hospital staff.

Related Read: 13-year-old opens a bakery. For every cupcake he sells, he gives one to the homeless

Then, as New York slowly began reopening amid the pandemic, she had “an epiphany.” As many as one in three children in the Bronx were going hungry. Due to the pandemic, many summer programs had been forced to close. However, she knew she could help.

“I would pivot my efforts toward feeding children because I knew that some of the city’s food distribution programs had been canceled or reduced due to the pandemic. I created Full Heart Full Bellies to provide prepared meals for children in grades K through 12, from July 6 to Aug. 28, in the Bronx, which is the poorest of the five boroughs,” she wrote for TODAY.

Thus, the Bronx children were treated to warm, nourishing meals that would make anybody’s mouth water. Her skills and Full Heart Full Bellies were able to provide 1,800 nutritionally balanced meals each week!

“These kids deserve great-tasting food — a sense of comfort during such a tumultuous time,” said Peartree.

“The bare minimum I can do is lend my talent, lend my strength to help feed people for these eight weeks throughout the summer,” Peartree said in an interview.

Thanks to some help from big names like Audi, Amazon, Coca-Cola, Barilla, as well as local businesses and nonprofits, Full Heart Full Bellies truly lived up to its name. Also, Peartree’s GoFundMe raised over $60k of a $100K goal. Thus, everyday people helped feed the kids.

A Plan to Keep Feeding the Hungry

Although originally planned for the summer months, the work will continue through December, thanks to Amazon’s partnership. However, Peartree wants the efforts to continue well past December.

“By then, we’ll have served 14,400 meals to kids in need and an additional 2,500 to nursing homes in the Bronx. But we hope to keep going after that. The goal is to feed children and their families for an entire school year, providing 250,000 meals over ten months,” she wrote.

Today, Chef Peartree is calling on others to follow her lead.

“When we talk about social justice, we often get hung up on the hashtag instead of the actual work. You may not march, but maybe you can feed a protester. After the money is donated, what can we do in the community to change things?”

In an interview with News4 NewYork, an NBC affiliate, the Chef explains why she does it:

“No, it won’t end hunger, but in the meantime, between time, I’m going to use my talents to help feed these children,” she said.

For Chef Peartree, her efforts are just part of being a decent human being.

“I don’t have the most, but I don’t have the least either, and I just feel like that’s something that you should do as a human being because you never know what any of us will be in a situation where we need something.”

See more in the video from CBS NewYork below: