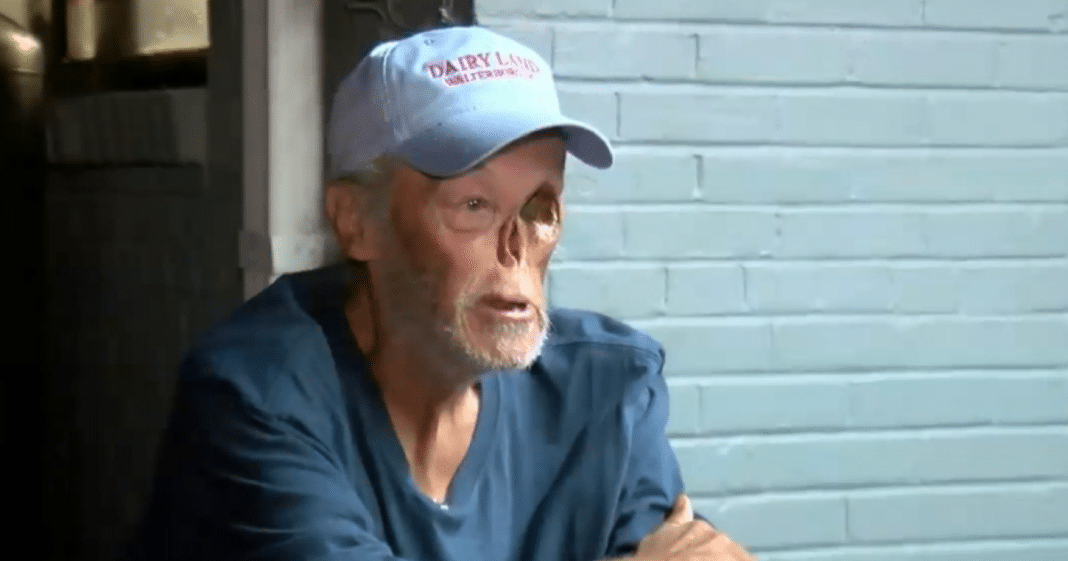 Kirby Evans, a 65-year-old cancer survivor, who lost his nose and an eye due to the disease, was left mortified after he was reportedly told to leave a South Carolina gas station because of his appearance.

According to the man’s daughter Brandy Evans, her father was grabbing a bite to eat at Forks Pit Stop when he was discriminated against for his disfigured face.

After purchasing a drink and a package of donuts, Brandy alleged in a post shared on Facebook that the gas station’s owner, who she later identified as Donna Crosby, “grabbed him by his shirt and pulled him into her office.”

“Next thing I know, she jerked me into her office,” Kirby said. “The words that came out of her mouth hurt me so deep.”

Brandy then claims the owner said, “If he was going to eat in here he would have to cover his face.”

He said the manager told him he was scaring away customers and asked him to cover his face or leave.

“How can a person eat anything with his face covered?” he asked.

Distraught over what had just happened, Kirby left the gas station “in tears” and shared the heartbreaking experience with his daughter.

Seven years before the incident, Kirby had surgery to remove basal cell carcinoma, a type of skin cancer caused by an uncontrolled growth of abnormal cells arising from the squamous cells in the epidermis, the skin’s outermost layer.

“He cannot help what the cancer did to him,” Brandy wrote. “My father is the strongest man I know but, as he told me what happened to him, I watched tears roll out of his eye. It hurt me to see him hurt like this, especially over something he cannot help.”

Brandy revealed that her father cannot afford the reconstructive surgery needed as he is on a fixed income. He is also unable to wear an eye patch due to the fact that “it rubs the eye socket raw and where his nose was.”

“It has to stay open and nothing is to touch that area that might it rub it raw.”

Every one i Thank You for your support this sure is going to make him smile. In the morning i have to take my son to…

Since the incident, Kirby’s loving daughter created a GoFundMe for her father that as of this writing has raised $75,140 of its original $75,000 goal.

I am heartbroken over the way this man was treated, and I hope he never has to deal with this kind of unacceptable behavior ever again. May it serve as a reminder to everyone – we are all humans, we do not know anyone else’s story or what they are going through. Kindness goes a long way.