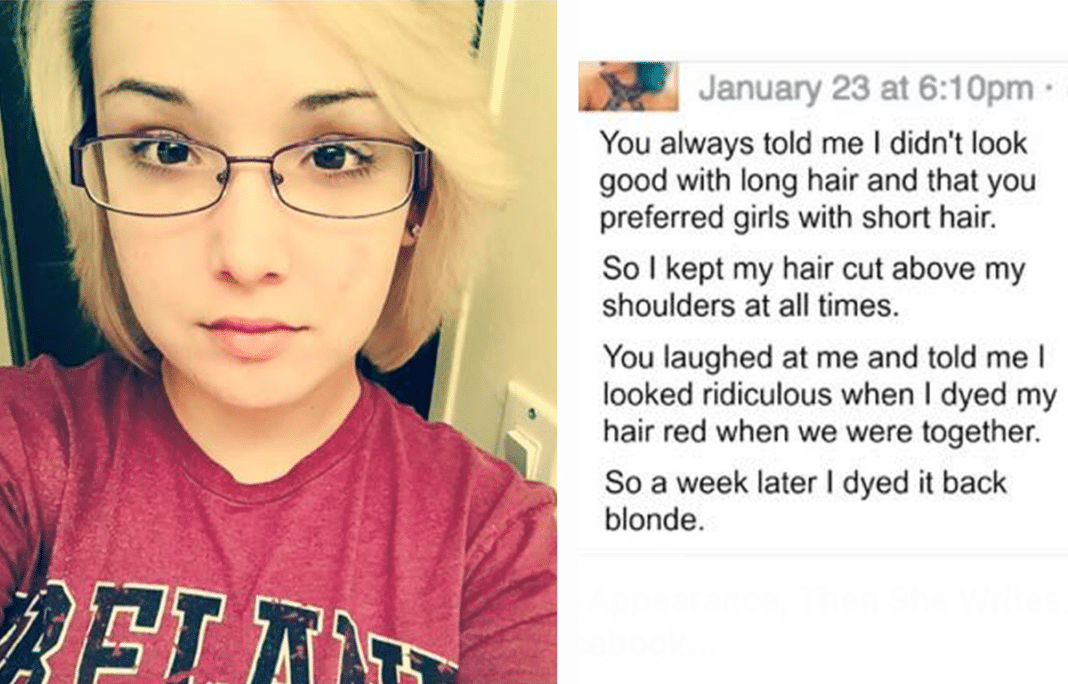 As the saying goes, you usually have to kiss a few frogs before you find your prince. Before you learn what true love is all about, you go through that awkward phase where you doubt yourself and think you have to change who you are to please a significant other. It seems we would often rather reject ourselves than reject a person we have a crush on, even if they are, in fact, just a frog.

We’ll bend over backward, change our appearance, and do just about anything to attract them. Only later, we realize, if they don’t like us for who we really are, then they need to go! But learning to be comfortable and secure in who we are takes time and sometimes extremely hard lessons along the way.

That’s the story of a young woman from Alabama, Brittaney Lynn Shane, who posted an open letter to her ex after he dumped her. Only after the relationship was over did she realize exactly how emotionally abusive he had been to her. She realized how much she had changed to please him; only it was never enough. He continued to “point out every single flaw.” The more she went out of her way, the less he seemed to care. In the effort to please a man who didn’t respect or care about her, she lost herself.

When I was with you vs. now. ?I know I can see a difference. I actually look happy now. 🙂

Brittaney Lynn Shane posted her open letter in December 2015, and since then it’s been shared over 45-thousand times with over 24 thousand comments. Clearly, it’s a story that touches many people. That’s because her story teaches us all a powerful and extremely valuable lesson about what we’ll all blindly do for love…until we know better.

It started with small changes to her appearance, but then it grew to a long list of ways that she tried to make him happy.

“You always told me I didn’t look good with long hair and that you preferred girls with short hair.
So I kept my hair cut above my shoulders at all times.
You laughed at me and told me I looked ridiculous when I dyed my hair red when we were together.
So a week later I dyed it back blonde.
You would always point out if I was wearing too much makeup. (Winged eyeliner and mascara most of the time)
So I just stopped wearing it.
You told me tattoos and piercings were tacky and ugly. And would try to take out my belly button ring every time you saw it.
So I took out my piercings and didn’t get any more tattoos.
You pointed out my stretch marks every chance you got.
So I did my best to keep them hidden.
You pointed out every time I looked like I had gained weight.
So I started eating less every day.”

After going to all of these lengths, Shane said her boyfriend devastated her self-confidence. He only focused on the negative.

“You pointed out every single flaw I had. So I lost every bit of confidence I had.”

Then she got wise to his tactics. He wanted to push her down to make himself feel better.

When she started to see through his manipulation, he left her for another younger girl, so he could start all over again. She couldn’t help but feel responsible at first.

“You left me for a younger prettier girl. Someone you could mold and shape into what you wanted. Like you tried to do with me. And up until a few months ago, I blamed myself for everything that happened. You blamed me too.”

Finally, after all the heartache, Brittaney Lynn Shane realized the truth. He wasn’t out of her league. She was out of his. She was willing to love him the way he was, with all of his flaws, but it was he who just couldn’t do the same. It was his problem.

“But finally, I started to see the truth. You weren’t out of my league. I was out of yours.”

“When I took you the way you were. Your many many many flaws and everything else that was there. The only time I ever asked you to change was when I asked you to show me you actually cared about me. Which you never did.”

The hardship of breaking up with this jerk taught her a powerful lesson. She realized that along the way she had forgotten who she was, but that was about to change. All the things she had changed to suit him, she would do them all again now, because that was part of being her.

“So now here I am a few months later. My hair is past my shoulders. My hair is bright red. I’ve got a new tattoo. New piercings. Started wearing makeup again. I eat whatever I want whenever I want and weigh 135 pounds. I still have my stretch marks.
And I’ve finally gotten my confidence back.
I finally see myself looking back at me when I look in the mirror. Not the girl you had created. You have your life. Your new love. Your side of our story. But you no longer have me. Not in any way, shape, or form.”

These last few days have felt like a dream!! What started out with just me getting everything off my chest has turned…

Shane confessed it was difficult to admit how this one guy had manipulated her so much. It was even embarrassing at first, but now, she was proud of how she had moved past it. She recaptured her authentic self, and would never change to suit a man who wasn’t worthy again.

“It’s so hard for me to come out about this and admit that I became so vulnerable because of one guy. Something I always said would never happen.”

“It’s humiliating to even think about how low I got.”

“But what gives me the guts to come out about this is the fact that I overcame it and I’m finally back to who I really am.”

Today, Brittaney Lynn Shane is happily engaged to be married, runs her own business, and has enjoyed a following of over 36,000 people on Facebook. We all learned a valuable lesson from her story, so we thank her. We all compromise a little in relationships, but if the other person wants you to change entirely, they aren’t in your league.

You always told me I didn't look good with long hair and that you preferred girls with short hair. So I kept my hair…