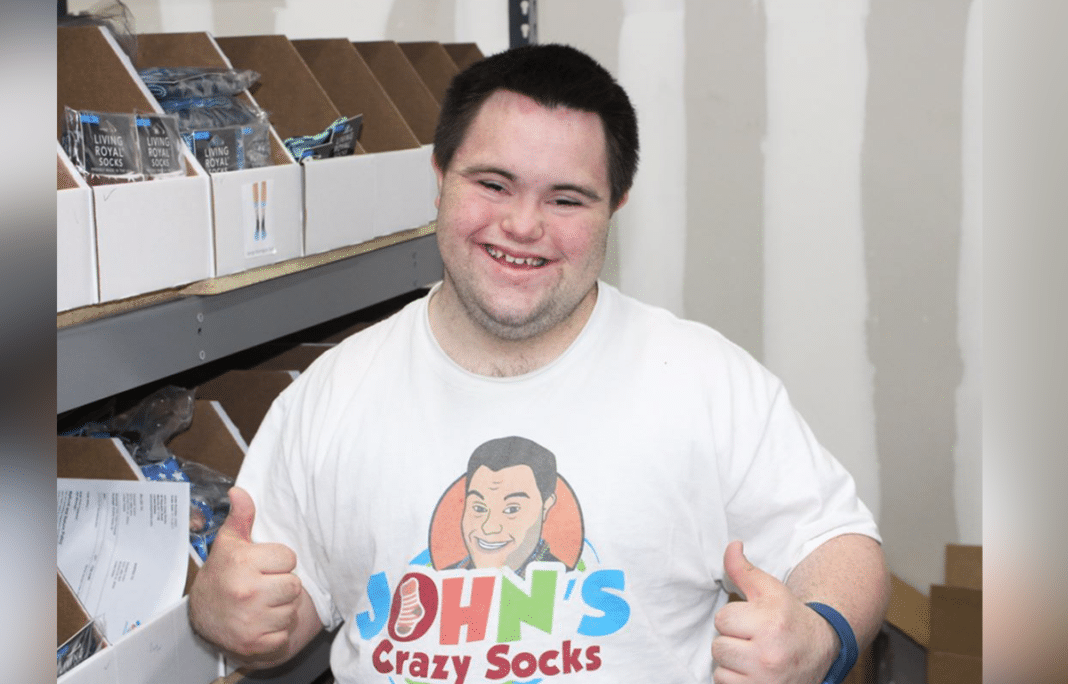 John Cronin is a 22-year-old entrepreneur who founded a multimillion-dollar business that skyrocketed to success in just two years starting in December 2016.

John and his father, Mark, founded John’s Crazy Socks after brainstorming ideas when John was about to graduate from high school in Huntington, New York.

Mark Cronin happened to be looking for a new line of work himself when his son suggested starting a new business. John had always loved wearing crazy colorful socks featuring bright colors and endless characters from superheroes to unicorns to just about anything you can think of. So it was a natural fit.

“I wanted to go in business with my father,” John said, “Because I love my dad so much.”

#NationalDisabilitiesAwarenessMonth raises awareness about employment issues for disabled people, and celebrates the many and varied contributions of America's workers with disabilities. John's Crazy Socks works hard to prove what's possible when you give someone a chance. We have over 16 employees with differing abilities, all essential members to our team. We would not be able to grow and do the work we do without them. We are very thankful to Microsoft for shining a spotlight on what we do here at John's Crazy Socks for Disabilities Awareness and Down Syndrome Awareness Month. You can read more and see the video on Microsoft's Transform Blog. #johnscrazysocks #johncronin #microsoft #provingwhatspossible #spreadinghappiness

The two had an inspirational moment as World Down Syndrome Day, on March 21, approached. To celebrate the day, people wear colorful, crazy socks. They thought about selling socks celebrating Down Syndrome, but realized nobody made them. That’s when John had an epiphany – he would design his own socks to sell.

Mark agreed it was a great idea and John sketched out his first design, the numbers “3-21” with hearts and bright colors. The date of World Down Syndrome Day has symbolic meaning, because Down Syndrome is caused by the triplication of the 21st chromosome.

“I will sell crazy socks. Why socks? Because it’s fun, it’s colorful. I like being creative and I want to see wonderful things here,” John said.

John and Mark jumped into the sock-selling business. They didn’t have a clear business plan, but they had a great idea and a love for what they were doing. The entrepreneurs started a Facebook page and a website and started sharing videos of John talking about his crazy socks. Then, their first orders started coming in from the community.

John was so excited he wanted to deliver the socks in person. He hand-delivered colorful boxes with handwritten notes and candy. Many of the first customers know John from high school and were so happy to see him, they shared their own videos on social media, which spread the excitement and word about his new business.

Special delivery for @paigefriedlander ! ?? Making a local delivery this week at @masschallenge and spreading happiness ? #repost "Today at work I got the best hand-delivered gift! I ordered @johnscrazysocks online and John hand delivered them to me! Each order comes with candy and a handwritten thank you note from John. 5% of everything they earn goes to the Special Olympics. Proud to support one of the amazing startups that inspires me every day ?" #JohnsCrazySocks #SpreadingHappiness #JohnsCrazySockSummer #MassChallenge #specialolympics #funsocks #crazysocks #socks #givingback #shopsmall

From humble beginnings, the business took off fast. Last year, John’s Crazy Socks shipped over 42,000 orders, totaling around $1.7 million in revenue. The prospects for this year look astonishing as they expect over $6 million in revenue.

John’s company attracted famous customers, like the late President George H.W. Bush. John heard that Bush loved wearing crazy socks and decided to send him some. Soon, he was exchanging letters with the 41st President of the United States. On March 21st, Bush wore socks designed by John and shared the news on Twitter the following day.

“Yesterday I was inspired by my friend John Cronin to wear these beauties from @JohnsCrazySocks marking World Down Syndrome Day. A great sock supporting a wonderful cause.” 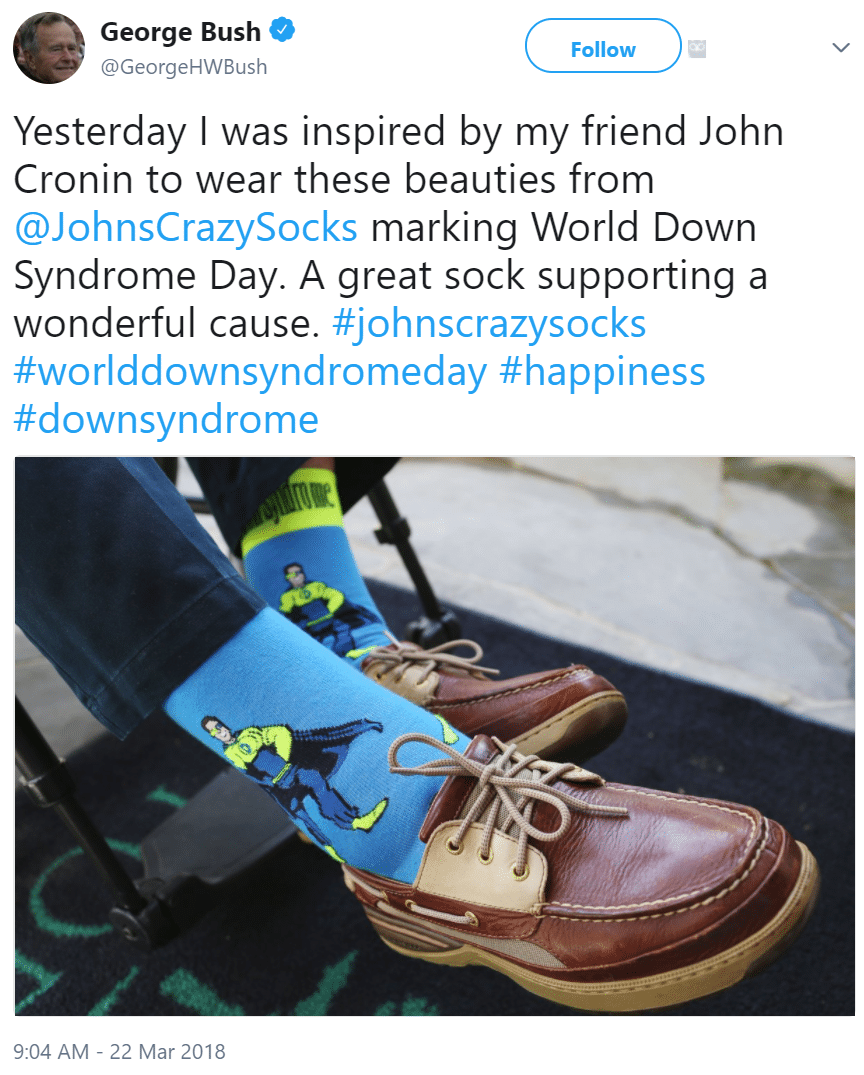 Then when Barbara Bush passed away, the former president reached out to John for socks that would honor her legacy of promoting literacy. John selected socks from Modsocks with stacks of books on them and named them “Library Socks for Literacy.” They continue to sell them as a fundraiser for the Barbara Bush Family Literacy Foundation.

John mourned the passing of the former president on the company website and noted that he signed the Americans with Disabilities Act, changing the lives of millions of Americans. Today, John’s Crazy Socks is carrying the torch for everyone with disabilities.

So far, the company hired 18 individuals with disabilities out of 35 employees. They donate proceeds of their sales to charities, but they are also going much further, all the way to Capitol Hill.

John’s Crazy Socks genuinely believes in the importance of giving back. Each and every purchase goes into their Giving Back program and allows them to do more for their charity partners.

This company has given 5 percent of their proceeds to the Special Olympics from the day that they were founded. Now, they also give money to charity partners such as the Autism Society of America and the National Down Syndrome Society.

See more in the video from VOA News below:

John Cronin is no regular entrepreneur. He has Down Syndrome, but this has never stopped him from being a success. Him and his dad are on a mission – to 'spread happiness.'