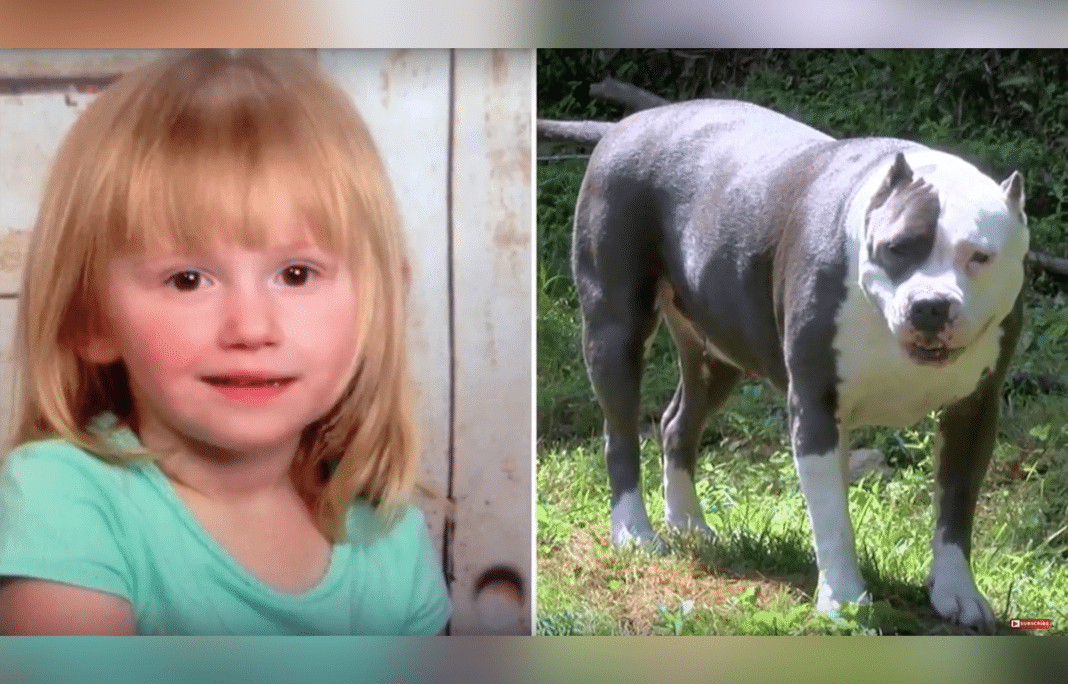 Two-year-old Charlee Campbell and her Pit bull, Penny had been missing for almost two days. A massive search with ATVs, men on horseback, and bloodhounds led to nowhere when over a hundred volunteers joined firefighters searching the Bullitt County Kentucky woods. She was nowhere to be found.

Charlee disappeared from her Grandmother Beth Campbell’s house in Lebanon Junction, Kentucky in June 2018. Her grandfather, Ronnie Campbell had custody of Charlee. The volunteers searched all around the home in the surrounding woodland area. Cadaver dogs seemed to find something when they focused attention on the family pool, but there was no trace of her.

After 32 hours went by, the police and searchers began to think the worst. But then their luck changed. Erik Butler, the local Fire Chief, happened to be at the grandparents’ home when he spotted something moving. Penny showed up at the door. Up until that moment, everyone believed that the loyal family dog was with Charlee, so where was she?

Butler hoped that Penny’s appearance meant that Charlee was nearby too. A quick call to the Sheriff’s department revealed that his instincts were correct. Sheriff Donnie Tinnell confirmed they had found her.

Charlee was found 500 yards from the family home. According to a neighbor, Wayne Brown, he was sitting on his couch and praying that someone would find the girl when she wandered out of the woods.

“I’m convinced that God led her to our porch,” Brown previously told the Courier Journal. “I don’t know why me. It could’ve been anyone. But no one will convince me otherwise — I believe with all my heart that it was the Lord, Jesus Christ, who brought her up on that porch and let her be found by us.”

A scratched up and dehydrated Charlee was found in her pajama top featuring a character from the Disney movie, Frozen. She was missing her diaper, covered in dirt and ticks from the woods.

Charlee’s grandmother, Beth Campbell, believed that Penny had stayed with Charlee throughout the ordeal, protecting her from dangerous wildlife like coyotes.

2-year-old Charlee Campbell has been found safe. Little girl had been missing for 32 hours in rural Kentucky. Her family says Penny, the Pitbull, is the reason Charlee survived.

The Sheriff questioned how Charlee could have survived for nearly two days in the wilderness with Penny. Searchers had combed over the very area where she would later be found six times, including with thermal imaging devices. So it’s not clear where she had been the whole time, much less how she managed to find her way back. Even the U.S. Army conducted a search since the property borders on Fort Knox.

“I can’t believe she survived it,” Tinnell said. “There’s coyotes in them hills. There’s copperheads and rattlesnakes and ticks — all the elements. And somehow she came out in pretty good shape.”

“That big dog (Penny), because he’s huge, and that child looks like it would be hard to miss,” he said. “But it might be a circumstance where she got tired and laid down and went to sleep for hours on end — behind a stump or behind a tree or who knows what, a big rock — it’s possible to overlook, I guess, if the dog laid down with her.”

Was it possible for the massive search party to miss her? Did Penny keep her safe alone in the woods all that time, or was she hiding out in a house?

“If she was in the woods the whole time surely it’s a miracle,” he said.

See the video from the Courier Journal below:

Charlee was taken to a hospital in Louisville to recover and her mother, Natalie Quick, and grandparents were allowed to visit her daily.

“‘I don’t have to worry about my kid being dead,'” Quick said through tears after news her daughter was found.”

“‘Penny came home,’ Quick said of the dog. ‘And not two minutes later here come Charlee down the hill. It gives me cold chills.'”

Grandmother Beth Campbell, 40, was charged with endangering the welfare of a minor. Court documents stated that Campbell had used methamphetamine the night before the child went missing. Then in the early hours of the following morning, she “wandered out of the home” through an unlocked side door.

A witness told the sheriff’s office that it wasn’t the first time that Campbell had failed to prevent Charlee from walking away from home. It’s a good thing the little girl had Penny the Pit bull by her side.

See what happened from nollygrio below: