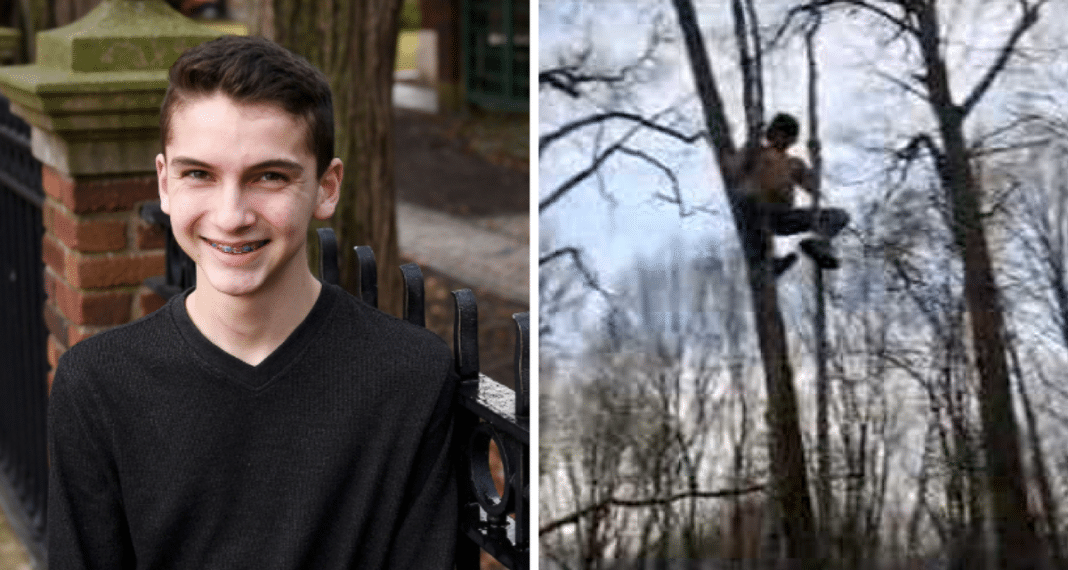 Kids do get hurt; they do things they perhaps know they shouldn’t. There might not be frightening consequences attached. But for Alex Kingsbury, 14 of Columbus, Indiana, one day last October nearly changed the course of his young life forever.

While at his uncle’s house, Alex climbed a tree. He swung his legs over a branch, hoping it would bend and give him a ride back down to the ground. This unsafe act is known as tree parachuting. When Alex was 15 to 20 feet in the air, the branch snapped, quickly throwing him to the ground.

“I broke my neck, and I remember waking up and not being able to move anything,” Alex tells PEOPLE.

“It was the worst feeling ever. I kept asking why I couldn’t move anything.”

The young boy was airlifted to Riley Hospital for Children in Indianapolis; their, doctors told Alex and his devastated family he had suffered an incomplete spinal cord injury at his C6 vertebrae. Dr. Jeffrey Raskin, a pediatric neurosurgeon at the hospital, commented that Alex’s paralysis was so severe if he didn’t show any improvement in 72 hours, there was a 10% chance he’d never walk again.

Alex proved everyone wrong. “He improved dramatically after surgery,” says Dr. Raskin. This is quite uncommon for those with this specific injury.

Mindy, the teen’s mother, didn’t leave his side. Everyone in the family stood by Alex. She said the first days and weeks after her son’s accident felt so surreal. “You know your life is changing in that minute and you can’t comprehend how big it is,” she says. “He was unable to move, and it was very devastating. During the first few days, he had a tube down his throat and had a difficult time talking. I told him I would learn his facial expressions so I knew what he needed.”

Alex remained hospitalized for 45 days. Each day, he improved little by little. He went from being in intensive care for a week to regaining movement on the right side of his body. He was able to walk a few steps with the aid of two people holding him up.

“I am so thankful that I was able to walk out of the hospital,” says Alex, who was discharged on November 15. “I was using a cane, but it felt really good.”

There isn’t one day that passes where the Kingsbury’s don’t feel grateful. Mindy says her son’s recovery is a miracle. “We don’t take this lightly,” she says. “There were a lot of people in rehab [with Alex] who didn’t get to walk again.”

She adds: “We’re a family of faith. Alex has big things ahead cheer him on. We always knew he was a  really strong kid but I am blown away by his tenacity.”