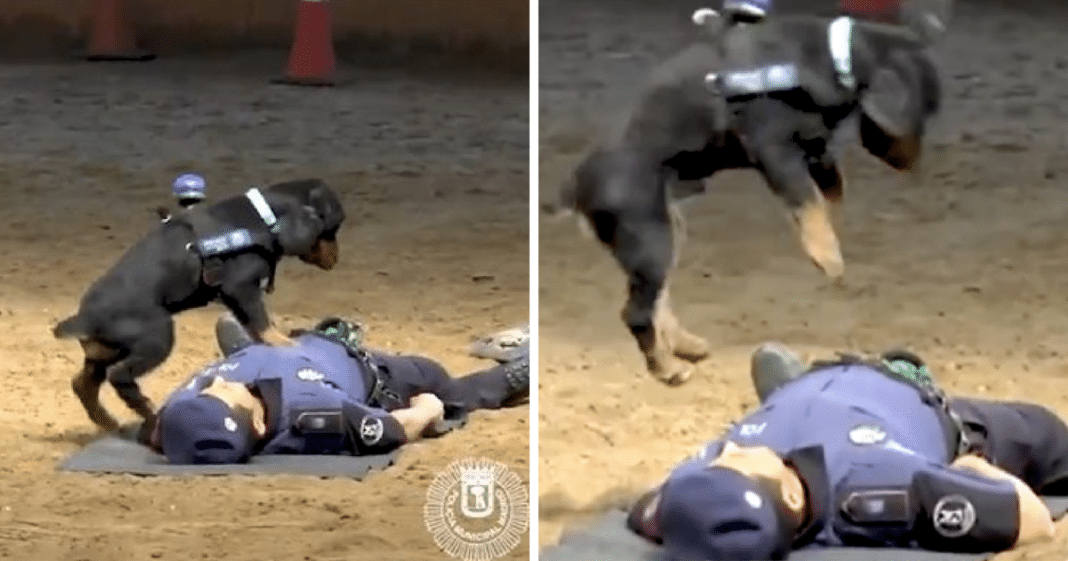 A video of a police dog performing CPR on a police officer really has to be seen to be believed. It features an adorable and extremely well-trained dog named Poncho wearing a blue police light and harness.

Poncho’s handler pretends to collapse and lays down on a mat on the ground. Poncho is released and bounds over to the officer, immediately jumping high up and down on his diaphragm, replicating the cardiopulmonary resuscitation technique to roars of laughter from the crowd.

Then Poncho, wiggling all over and stubby tail wagging at 100 miles per hour, seems to check for signs of breathing or a pulse. He cuddles up to the officer and lays his face on the man’s cheek. Finally, the officer awakes and Poncho couldn’t be more excited.

The video was introduced by the Municipal Police of Madrid on Twitter with a caption from Josh Billings, a famous 19th-century humor writer, and lecturer from the United States.

“A dog is the only thing on earth that loves you more than you love yourself.”

Poncho’s adorable performance reminds us that performing CPR can triple the chances of survival for those who experience out-of-hospital cardiac arrests.

For more on how you can do CPR, see the information below:

Knowing the 3 steps to CPR could save a life https://t.co/u4xztbERJf

Although it’s incomparable to Poncho’s off-the-scales cuteness, a new automated device promises to save untold lives, ensuring patients receive uninterrupted chest compressions on their way to the hospital.

This automated CPR machine was created to help save lives ? pic.twitter.com/QoJQNdcBvM