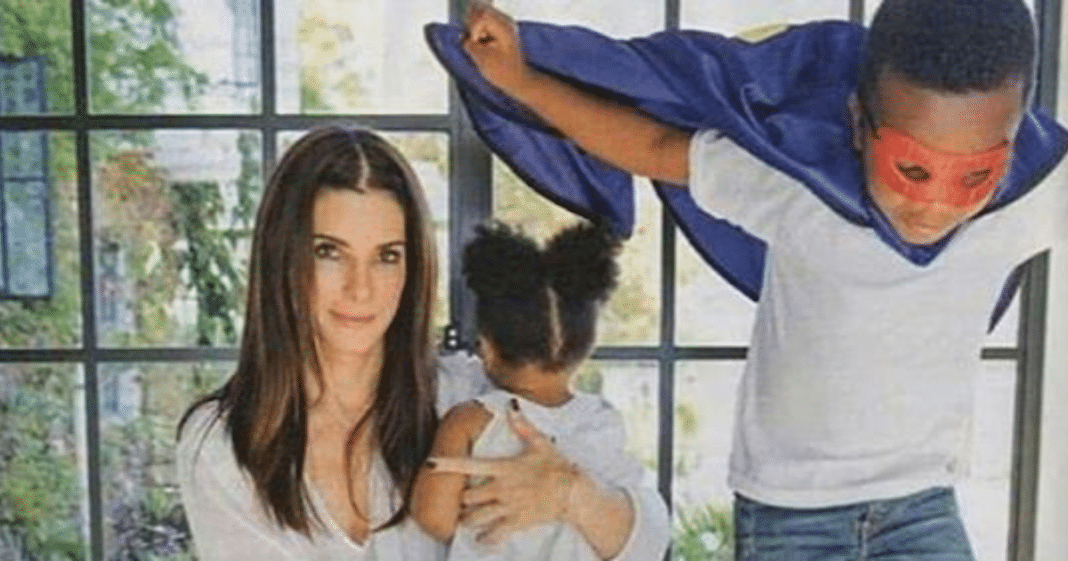 Oscar-winning actress, Sandra Bullock wanted to be a mom from an early age. So much so, that she once said her own mother did her best to prevent her from becoming pregnant in her teens.

At a media event, Bullock said:

“I would have been pregnant or knocked up at 17. I wanted to be a mum at a very young age. So I kind of felt the drive and the desire to. My mother knew that and she kept me under lock and key.”

As much as she has wanted to be a mom, she is also fiercely protective of her kids, shielding them from the media spotlights to the best of her abilities, including once filing a lawsuit when a publication used a picture of her daughter against her wishes. Bullock  stands firm that pictures of her kids will only be released when and if she decides to allow it.

Bullock adopted nine-year-old son Louis in 2010 and six-year-old daughter, Laila in 2015. You might not have heard about it because she kept the news secret. You may not have seen any pictures of the kids in photos by the paparazzi. There’s a very good reason for that: She says the paparazzi once traumatized her little girl.

According to Now to Love:

“The mum-of-two, who you won’t find on social media, has had to deal with paparazzi and the impact that their stalking behavior has had on her children – little Laila suffered PTSD from a fear of being photographed – and is not afraid to use lawyers to chase down images when she has to.”

Below, Bullock poses with the kids she takes under her wing in the movie, Bird Box.

In an interview with InStyle, Bullock revealed the scary details, as her son ran to hide his little sister from photographers. The news about Laila wasn’t officially out yet, and Bullock feared the paparazzi would ruin her chances to adopt her after taking care of her as a foster parent for many months.

“We had an allergy scare that sent us to the ER, and we were followed by the paparazzi, so the word was out that I had another child. And everyone wanted photos. It was heartbreaking. Louis would hear a helicopter or drone, and he’d run to get his sister and drag her across the lawn and hide her under the trampoline. So poor Laila had PTSD. But it took the bounty off once we did those official photos. Everything’s a learning experience.”

When the paparazzi found out about Laila, that’s when Bullock decided to do an interview with PEOPLE magazine, and reveal pictures of her kids herself.

CONGRATULATIONS SANDRA ? • I'm so happy for her ?? • #sandrabullock

A photo from inside People's mag. (picture cred to greys_addiction on Twitter.)

Fortunately, Bullock went on to adopt her second child and now promotes adoption, especially for kids in foster care. When asked if the situation for the hundreds of thousands of foster kids is getting better, Bullock pointed out that society needs to stop referring to “adopted kids.” Instead, they shouldn’t be single out from other kids.

“It makes me teary-eyed [wells up]. Let’s all just refer to these kids as ‘our kids.’ Don’t say “my adopted child.”

“No one calls their kid their ‘IVF child’ or their ‘oh, sh*t, I went to a bar and got knocked-up child.’ Let just say, ‘our children.’”

The proud mom also gave us a rare glimpse at what her children are like.

“Lou is super sensitive. I call him my 78-year-old son. He’s like Shecky Greene, a Jewish Catskills comic. He’s wise and kind. I saw that when they handed him to me. There was a spiritual bigness to him. I was like, “I hope I don’t eff that up.”

As for Laila, she is a fighter who Bullock says will surely go on to change the world, paparazzi or not.

“And Laila is just unafraid. She’s a fighter, and that’s the reason she’s here today. She fought to keep her spirit intact. Oh my god, what she is going to accomplish. She’s going to bring some real change.”

Several years ago, Bullock revealed that she shields her kids from the entertainment industry in another way. In 2015, she was yet to tell her son that she did a voice for one of his favorite movies, Minions.

When pressed further, Bullock said she wasn’t sure Louis would figure out it was her when he saw the film.

“If he does I’ll be totally shocked. He surprised me all the time, so,” said Bullock.

For more on Bullock and her hilarious take on working with her on-screen kids in the movie Bird Box, watch her interview with Ellen: