Abused Dog Tied To Tree And Left To Die, Then Rescuers Discover Her Secret 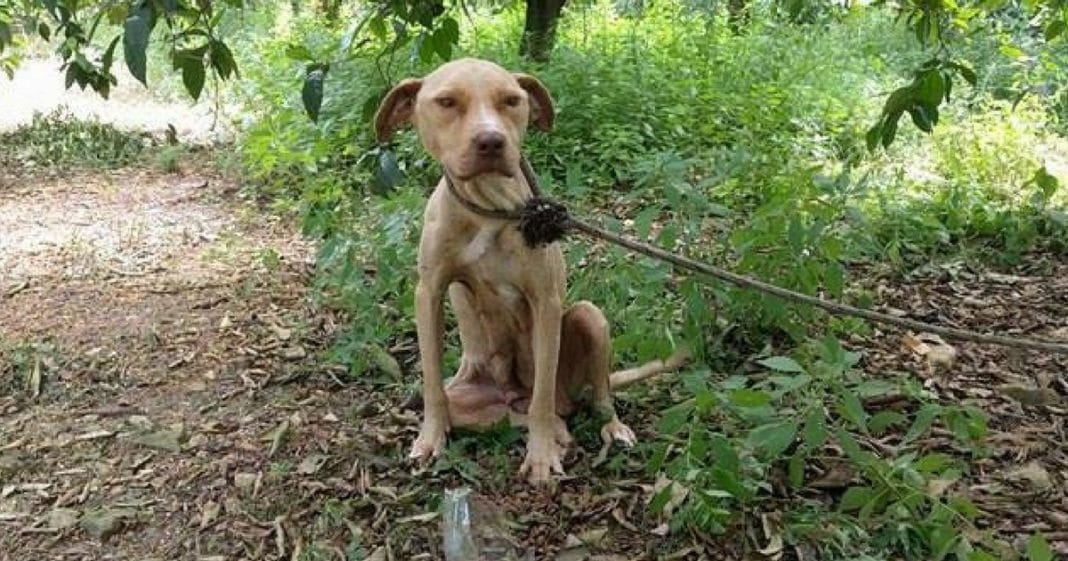 We just don’t understand how someone could abandon an innocent animal, especially one in need of extra help. They are helpless creatures – how could anybody be so cruel?

Lara, a pit bull mix, was left tied to a tree in a Greek forest with no access to food or water. Worse still, the villagers knew about it and did nothing to save her.

There are myths and terrible misconceptions about pit bulls that cause people to be unnecessarily afraid of them. Pits are often used for dog fighting, trained to be aggressive and to attack.

Pit bulls aren’t born vicious or cruel; they are conditioned and controlled. Those who aren’t trained to fight and attack can be just as sweet, just as gentle as other dogs.

When animal rescuers learned of Lara’s pitiful plight, they rushed to save her. When they got to her, though, they found something that left them stunned – Lara had given birth to four little puppies while she had been chained up.

Amazing, Lara managed to keep the four little ones alive for 10 days until rescuers arrived, even though she had no access to food, water, or shelter. The forest was rainy and then hot, so conditions weren’t pleasant either.

When finally found, Lara was dehydrated, in shock, and starving and her pups were malnourished.

Lara’s savior showed up in the form of her foster mom, Linda. Linda has fostered over 300 dogs and, with her special TLC, Lara’s doing much better and hopefully will soon find her forever home.

Amazingly, Lara suffered no long-term ailments from her ordeal. Sadly, one of her puppies did die, but the remaining three are doing well, all thanks to their dedicated mother who gave of herself to keep them alive, even when she was in dire straights.

“I met them last week and I fell in love,” Linda said of the rescued family of dogs. “The little ones are indescribably cute and Lara is a loving, cuddly dog. And gorgeous. She is gorgeous! Trusting and loving people, probably having no idea that us, the ones petting and loving her, belong to the same species responsible for her ten-day ordeal. She is a dog, you know. The kind of dog that would wag her tail for her owner, if she saw him again.”

“The puppies just opened their eyes a couple of weeks ago,” Linda continued. “In about a month from now, they will be ready for their forever home, so will their mum, after she is spayed. For now, she is providing us with ‘aww’ moments, priceless ‘aww’ moments!”

Some human mothers aren’t as dedicated to their youngsters as Lara is. Despite her former owner ditching her in the woods, Lara didn’t stray from her duty to care for her pups. She rose to the challenge and watched over them despite her physical struggles.

Were you amazed by Lara’s story of tenacity and love? So share this!