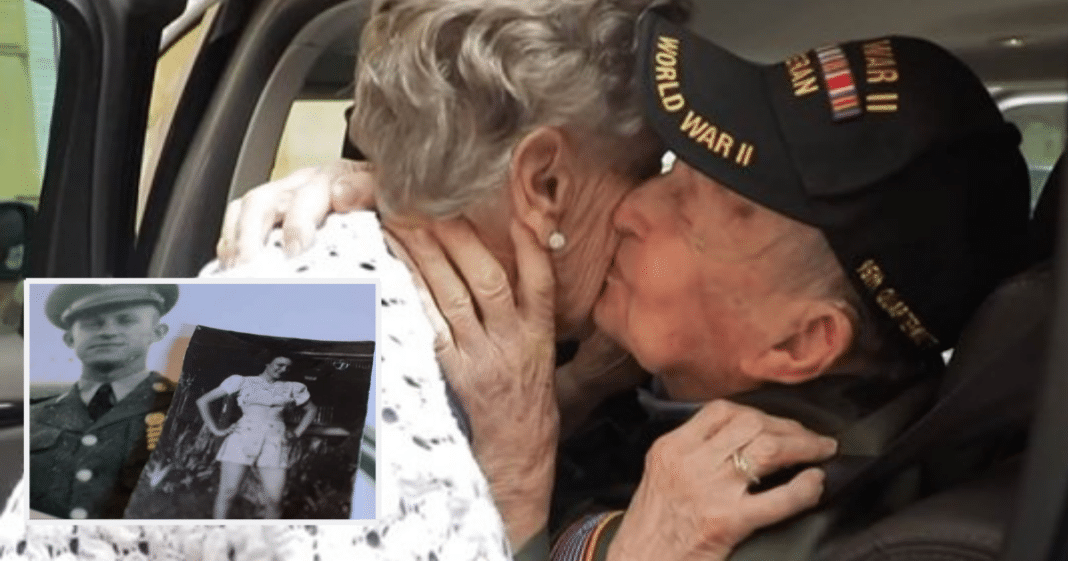 U.S Army veteran K.T. Robbins never forgot the French girl he fell in love with back in 1944 when he was fighting in northeastern France during World War II.

After having to settle for a rushed goodbye to his sweetheart, Jeannine Ganaye, when he was transferred to fight on the eastern front, Robbins eventually returned to America after the war, where he got married and resigned himself to never seeing her again.

However, he did hold on to a black-and-white photograph of her as a memento of the time they shared together when he was 24, and she was 18-years-old during the war. 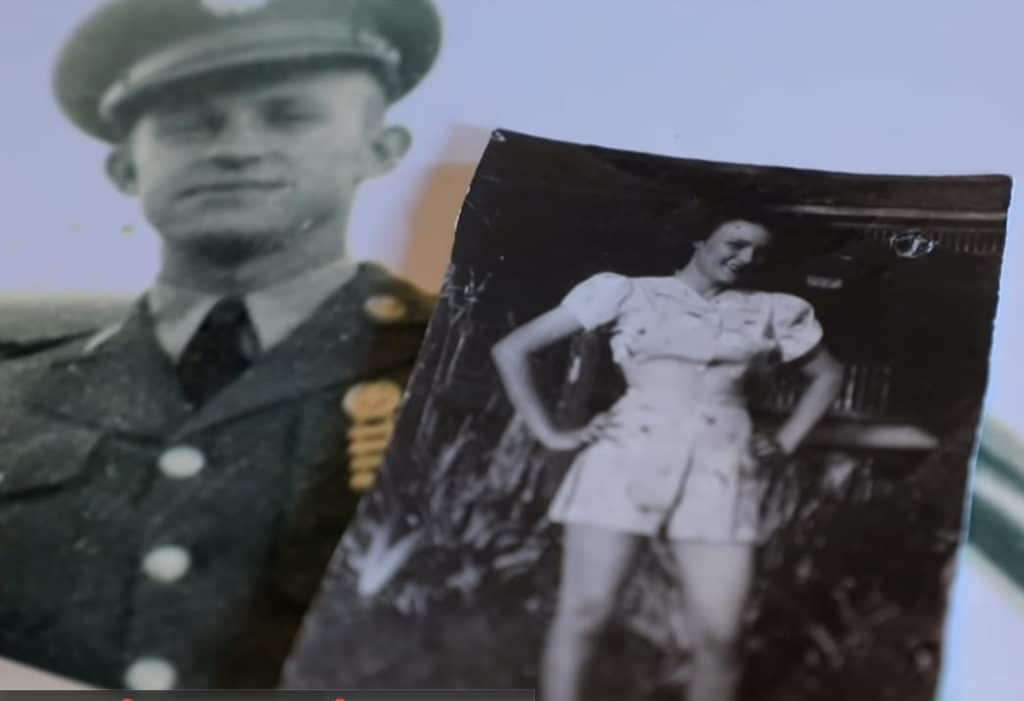 Meanwhile, thousands of miles away in France, Ganaye, now Pierson, had also moved on with her life, but still held on to the secret hope of seeing her lost love again one day. 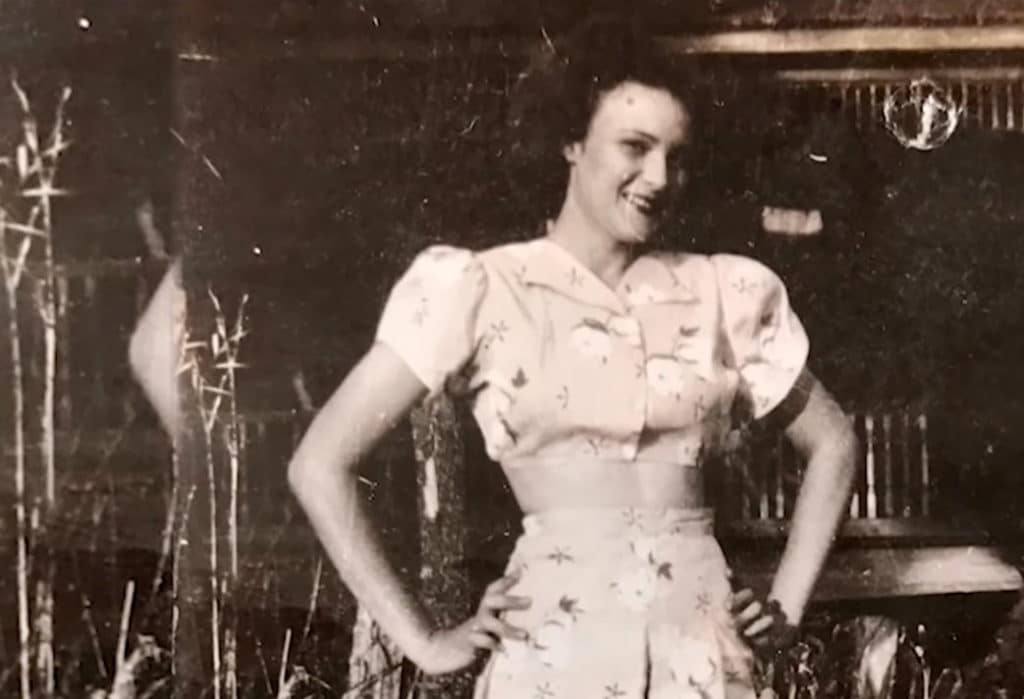 That day for both Pierson and Robbins came last week when the two love birds were united for the first time in 75 years by a French television station in a heartwarming scene just ahead of the 75th anniversary of the D-Day invasion on the beaches of Normandy.

Robbins, now 97, shared a sweet hug and kiss with Pierson, 92, in her French retirement home as all the years between their last time together seemed to melt away in one magical moment. 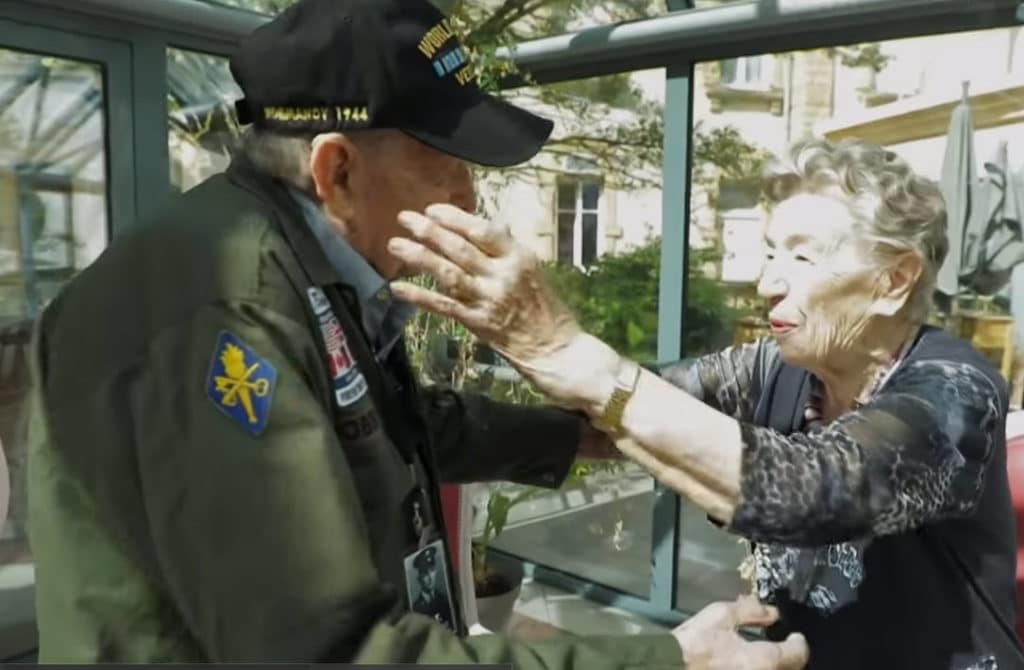 “I always loved you,” Robbins told her as they embraced. “You never got out of my heart.”

“He said he loves me,” Pierson said in French to reporters. “I understood

The incredible reunion was made possible after reporters from the television station France 2 interviewed Robbins about his WWII experiences, and he showed them the old photo of Pierson while reminiscing about their special time together.

Reporters later tracked down Pierson in France and delivered to Robbins the news he’s waited 75 years to hear.

In fact, his long-lost love was only 40 miles away from where they once met in the village of Briey.

This also brought back painful memories of when the two were suddenly separated when he was reassigned to the frontline.

“I told her maybe I’ll come back and take you, but it did not happen like that,” Robbins said.

Pierson even began trying to learn English after the end of the war in hopes that Robbins would return, she told France 2.

When he left in the truck I cried, of course, I was very sad,” Pierson said. “I wish, after the war, he hadn’t returned to America.”

Robbins was married to his wife, Lillian, for 70 years until she died at the age of 92 in 2015. Meanwhile, Pierson married in 1949 and went on to have five children with her husband, who also passed away.

“You know, when you get married, after that you can’t do it anymore,” Robbins said about any chance of a reunion when they were younger.”

“I’ve always thought of him, thinking maybe he’ll come,” Pierson said. “I wish he had come back.”

Robbins once again had to leave his former love last week to attend the D-Day ceremony on June 6, but this time the two vowed to get together again soon.

“Jeannine, I love you, girl,” Robbins said as they parted.

Love is truly a universal language.