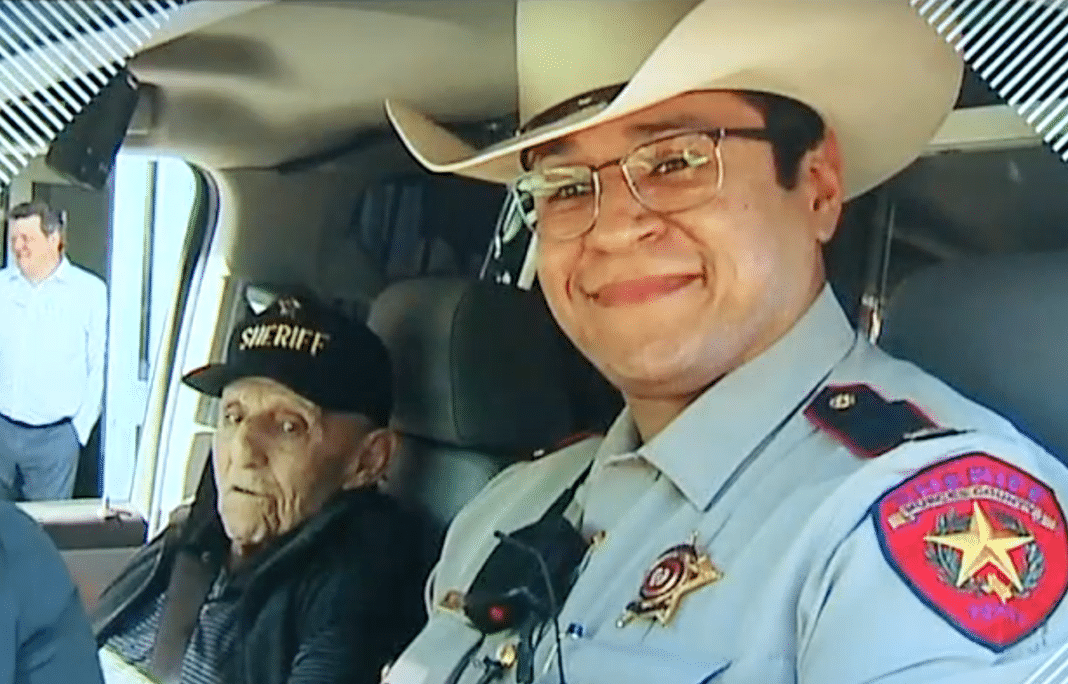 Why should we ever stop doing what we love? A 93-year old assisted living resident from Elan Corpus Christi, Eddie Ogdee dreamed of reliving his days as a Texan Sheriff. The retired cop could only dream about it until he got a Miracle Moment.

Elan Corpus Christi Assisted Living and Memory Care has started the Miracle Moment program to grant the chance for residents to do something they always wanted to do.

Ogdee became the first recipient of the Miracle Moment. He knew exactly what he wanted to do – go back to work, if only for a little while. Ogdee served for over 25 years in law enforcement and was the Sheriff of Brooks County, Texas from 1976 to 1981.

His wish came true on Wednesday, February 13, when Nueces County Sheriff J.C. Hooper took a trip to the facility. He and his fellow officers arrived to make Ogdee an honorary deputy for the day.

“I want to thank you for your years of public service personally. Also, I’d like to ask you today to be a deputy, an honorary deputy of the Nueces County Sheriff’s Office, for the day,” Hooper said. “Do you accept that?”

Ogdee was all-too-happy to accept and got a round of applause as he began his day. Soon he would be back in the familiar police cruiser.

Edward Ogdee, 94, was a Brooks County Sheriff from 1976 to 1981. He has over 30 years of law enforcement service. Today, Nueces County Sheriff J.C. Hooper made him an honorary deputy for the day. Here’s that moment. @callerdotcom pic.twitter.com/6X3w8FQKBO

As he rode in the cruiser, Ogdee remarked:

During his ride, memories of his days as a public servant protecting the community came rushing back.

The ride lasted for most of the morning and afternoon, as Ogdee and Lt. Roland Martinez talked about the finer points of radar, patrol pickup, and traffic stops, which Ogdee joked were his least favorite part of the job.

Meanwhile sitting in the back of the cruiser, Ogdee’s grandson got to share the moment.

“It brought back memories of when I was little. I used to ride around with him in Falfurrias,” D.J. Palmore said.

“I hope it reminds him of the many years of great service he did for the town of Falfurrias and Brooks County, and I hope he remembers this day for the rest of his life.”

When his ride was over, Ogdee was greeted by a Mariachi band and smiling family members as they enjoyed a celebration.

His daughter, Helen Palmore said her dad is her hero, and the strongest, most fearless man she’s ever known. She knew that the day meant the world to her father.

“You could just see the excitement in his face, his smiling. The best thing that he loves to do is just ride in the police car and check things out. Just loves it,” said Palmore.

Palmore revealed why she thought her dad had made to a healthy 93-years old.

What an amazing day for the retired sheriff and his family! We think the Miracle Moment program is a fantastic idea that should catch on with other assisted living facilities across the country.

93-year-old Eddie Ogdee served as a lawman for 25 years and longed to ride in a police car once again. He got his chance as an honorary sheriff's deputy. via HeartThreads Docs

See more from KIII 3 below: