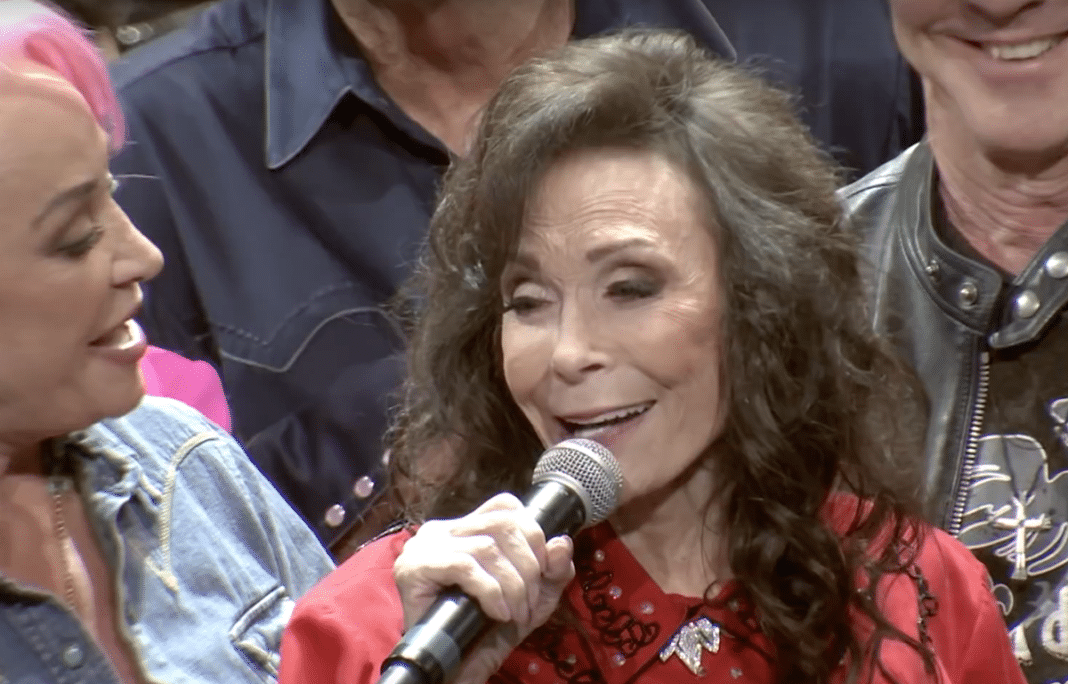 Country music icon Loretta Lynn, 87, appeared in a video taking an entertainment website to the woodshed for suggesting that her family was preparing to take her to a nursing home due to failing health. A feisty Lynn said she was doing fine and ready to raise hell.

A report from RadarOnline claimed that the family had decided to consider moving her to a facility where she could be monitored around the clock. She suffered a stroke in May 2017 and a broken hip in January 2018. Now the source claimed her famous friends were “lining up to say their farewells” before it was too late.

Lynn’s last appearance was a recent April celebration of her 87th birthday for a star-studded concert in Nashville.

“It’s so sad to see Loretta breaking down,” a source close to the singer told RadarOnline. In addition to requiring assistance with walking, Lynn also reportedly “suffers from glaucoma, so her vision is severely compromised.”

“Loretta already has in-house nursing care, and of course, her four kids are there with her most every day. But there’s still a fear that another fall is going to kill her, and she would be better off in a facility where she can be monitored at all times,” the source added.

Reading an article online, she turns to the viewers and says,

“Hey! This says I’m in a nursing home and I’m on my deathbed. You’re kidding me!”

“I ain’t dead, and neither is Willie,” said the singer.

Lynn referred to Willie Nelson’s similar experience in which reports suggested he had died. In response, he wrote the song, “Still Not Dead.”

“Both of us are coming back to life, and we’re gonna raise hell,” Lynn said with a smirk.

“Well, through the years they’ve said I’m broke, homeless, cheating, drinking, gone crazy, terminally ill, and even dead! Poor things can’t ever get it right. I guess if those old pesky tabloids are harassing me then they’re giving someone else a break……but I’m about an inch from taking ’em to Fist City!”

Well, through the years they've said I'm broke, homeless, cheating, drinking, gone crazy, terminally ill, and even dead! Poor things can't ever get it right. I guess if those old pesky tabloids are harassing me then they're giving someone else a break……but I'm about an inch from taking 'em to Fist City! #raisinghell #yourmommashouldataughtyoubetter #tellthetruth #fistcity #trashtalkingtabloids #fakenews

Fist City is Lynn’s 1968 song in which she warns women to stay away from her husband or suffer a beating. It was one of many songs that were banned from the radio in the 60s due to controversial themes but only solidified her popularity.

At Loretta Lynn's Ranch- July 6, 2019 This years concert is a special salute To Conway And Loretta Hosted and Performed by Tre Twitty and Tayla Lynn – Grandson and Granddaughter of the Legendary duo. This was a sold out show last year so make sure you plan early! Camping reservations can be made at 931-296-7700 and get your Tickets only $30-$35- Get them at this link: https://www.facebook.com/events/299303714015742/

We hope that Loretta Lynn keeps on raising hell because that’s the way we will always love her.

Here is Loretta Lynn singing her classic Coal Miner’s Daughter” at her April concert below: