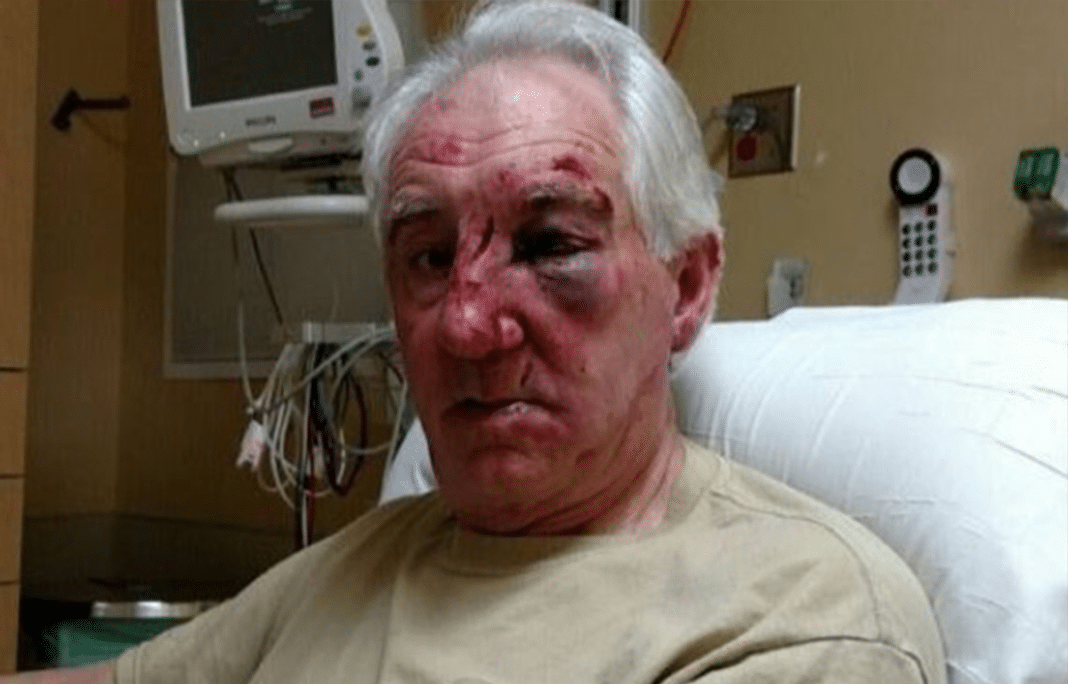 Over a year has gone by since a senior Minnesota man was brutally beaten by a stranger who followed him home. Even though news of the savage attack went viral mega-viral on social media, the attacker remains at large today.

The Anoka County Sheriff’s Office says the assault appears to have stemmed from a case road rage that took place on March 2, 2018, at 8 p.m. An angry driver followed the 71-year-old man home after he applied the brakes to avoid traffic.

“The victim had to brake suddenly to avoid a traffic situation in front of him.”

“This angered the driver behind him who began to drive aggressively and taunt the victim on the roadway.”

After the display of aggression, the senior man proceeded home, unaware that he was being followed. Then he got a beating that lasted a full minute.

“Once home, the victim was assaulted by a male who beat him repeatedly about the face and head. The beating lasted about a minute when the suspect asked the victim if he’d “had enough.” The victim sustained multiple face fractures and several lacerations requiring many stitches.”

The family was thankful their family member was still alive after the horrendous attack. His daughter-in-law, AmyJane Johnson, from St. Paul, took to social media, expressing her outrage that her stepdad had endured an assault at his own home. Today the post has generated over 76K shares.

She hoped that someone might be able to identify the suspect.

“LOOK AT THIS PHOTO. This is a 71-year-old man who did nothing…literally NOTHING to warrant this.”

“Our family is asking for everyone’s help in finding the low-life who did this to my father-in-law last night.”

The woman’s father-in-law believed the enraged driver had driven by, but he was hiding in the dark.

“As my FIL pulled into his own driveway, it seemed as though the man drove on. But, no. Instead, he drove just past the driveway to hide his car behind the tall trees out front, before advancing on my FIL.”

Then the suspect pounced on him from the dark.

“They were just out of range of the automatic yard lights, so it was pitch black where they were. He hit him hard and disoriented him and then continued to brutally assault him.”

Following the attack, the victim was able to make it into the house and call for help. He spent the night at the hospital with a broken nose, broken eye socket, multiple stitches and bruising. Fortunately, there was no brain damage.

The Anoka County Sheriff’s Office described the suspect on Facebook:

“The suspect is described as a white male, approximately 35 years old, 6 feet or taller, short hair, possibly in a “buzzed” style. The suspect was said to be wearing a longer length leather coat or jacket. The suspect quite likely had injuries to his hands.”

The vehicle had tinted windows and distinctive LED headlights:

“The suspect vehicle is described as a newer dark silver / gray vehicle with LED headlights and a line of LED lights just below the headlights, possible a Mustang or similar vehicle. The vehicle had dark tinted windows.”

Today, over a year later, AmyJane Johnson still hopes to bring this monstrous person to justice. If not found, then who knows who he’ll attack next. Surely someone knows something.

“We’ve seen online articles, it was on the local news stations, all over social media and the authorities we’re working with have been working so hard on this!”

“I can’t believe he hasn’t been found,” Johnson wrote on Facebook.

The police believe someone knows what the dangerous suspect did that day.

“Anyone who would brutally attack a senior citizen in this manner is a clear danger to the public. We believe there are people who may have information about this attack.”

If you have information, you can leave an anonymous tip on the Anoka Country Sheriff’s website.

We hope they catch the monster who thought so little of human life that they could do this over something as inconsequential as a car stopping in front of them.