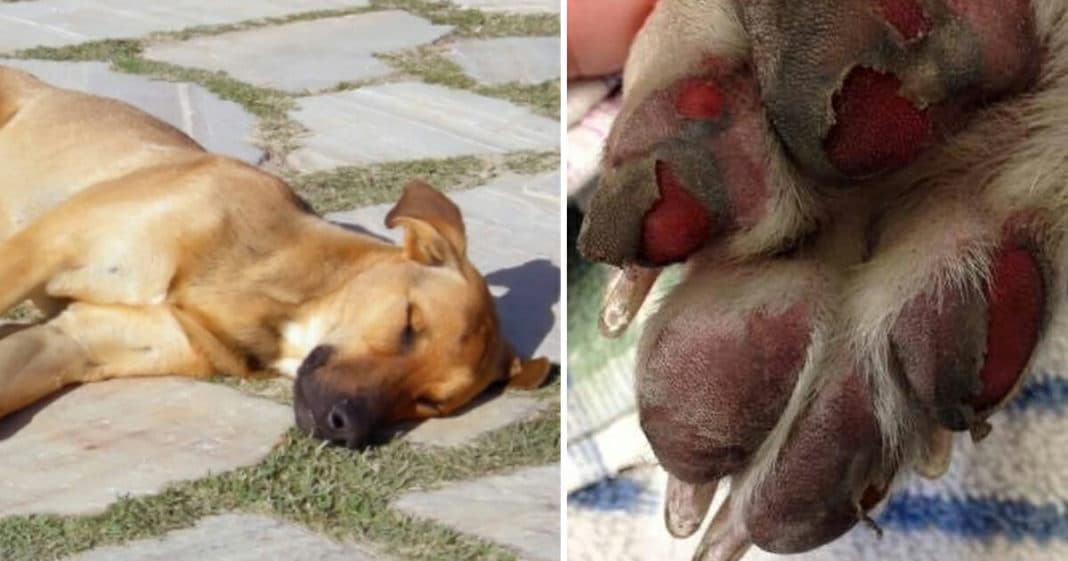 When sunny days finally arrived, there’s nothing in the world your canine pals want more than to be taken out for a walk. Making a walk part of your routine is great for the well-being and health of both a dog and owner. However, occasionally, and especially as the temperatures rise, it can be dangerous for your pet. There is a risk of a heat stroke. If this sounds surprising, you aren’t alone, but consider a story from the RSPCA.

The charity group in the UK shared a telling story on Facebook after a local dog passed away from a heat stroke in June of last year. The owner went out to walk the white bulldog early in the morning around 9 a.m. The temperature had already climbed to around 70 degrees. That hardly sounds hot, and the dog was healthy and only five years old. Yet the dog succumbed to the heat.

As a dog with a flat face and short nose, it was at greater risk since it could not pant as effectively. Likewise, dogs with long hair are at higher risk, especially when walking on hot asphalt that greatly increased a dog’s temperature through their padded feet.

The RSPCA advised the public to be aware of the danger signs for heat stroke in dogs, noting that many people were out walking their animals when the temperatures were at their peak that afternoon. Dogs are unable to sweat and have to disperse heat through panting and the pads on their paws, so if you feel that it’s uncomfortable outside, imagine how they feel.

“It does not matter if your dog is white, young, not a bull breed or ‘used to the heat’. Please be mindful of their needs,” the RSPCA warned.

Some of the signs to look out for:

With temperatures set to reach up to 30 degrees this weekend, it's important to learn the symptoms of heat stroke in dogs. Learn the warning signs of a heat stroke below ?☀️ #weekend #dogs #heatwave pic.twitter.com/z1ZuzQr2uy

It’s a good idea to keep a digital thermometer on hand. Usually, the temperature is around 101 and 102.5. If the temperature rises above 105 degrees, the dog needs medical attention.

According to the Canine Training Center, dog’s whose temperature hits 108 or higher are at serious health risk, though they may seem normal.

Nevertheless, they say to cool your dog off at home before heading to the veterinarian’s office. Once the dog stops panting and cools down to around 103, then it’s time to go to the vet. Don’t try to lower the temperature further or this could lead to hypothermia.

“A dog with a temperature of over 108/109 degrees is at high risk of organ damage. High body temperatures can cause brain swelling, destruction of the lining of the intestine, kidney failure, etc. and these conditions are not immediately obvious.”

“After being cooled down, dogs with serious heat damage can often times walk into the Vet’s office as if everything is fine.”

“It can take a couple of hours for the consequences of these conditions to become apparent and by then, it could be too late.”

How should you respond?

If you notice your dog is showing signs of heat exhaustion or stroke, then the first priority is to get them cooled down fast. Move to a cooler, shaded area and offer a small amount of water so the dog doesn’t drink too much and vomit. Turn on a fan or air conditioner to help cool off.

Drinking water should be offered but don’t force the dog to drink. They may be struggling to breathe so allow them to drink when they are ready.

Once you get to a shady spot, WebMD recommends wrapping the dog in towels soaked in lukewarm water, not cold or hot water. Cool water constricts blood vessels and will take longer to cool down the dog’s temperature.

If you have access to rubbing alcohol, you can apply it to the dog’s paw pads and belly with a cotton ball. Don’t let the dog lick the rubbing alcohol. As soon as you can, call your veterinarian to see if the dog may need more treatments, IV fluids, or medications.

For some great tips on the warning signs and how to respond, watch this brief video from WebMD below:

In some cases, dogs can suffer from water intoxication. It generally happens when dogs are swimming in a lake, pool, or drinking from a hose. Even though you don’t notice them drinking, they may take in too much water, which can throw off the dog’s electrolytes and blood pressure.

Symptoms include lethargy and nausea, mimicking the signs for heat exposure. Smaller dogs are more at risk, but it also affects large dogs, so veterinarians recommend limiting the time dog’s spend in the water to an hour or less.

Take breaks from outdoor activities and always provide a bowl of drinking water at all times.

See more about water intoxication from WZDX News below:

Each year, an untold number of dogs, cats, and other animals die from being left in hot cars or outside in hot weather. PETA reports that at least 64 have died between 2018 and 2019 so far in states all over the country. That includes states in the far North to the deep South.

Most cases are not reported to the actual numbers are far higher.

We hope this information helps you look out for your four-legged friends this summer and that you have a beautiful and safe summer together. Even on hot days, you can enjoy time in the mornings or evenings when the sun is not at its peak. With some common sense and awareness, you can beat the heat together.

Triple digit days are coming. Heat can be incredibly dangerous for dogs. If they are panting hard, drooling excessively or losing coordination there is a chance your dog is going into heat stroke. For some basic tips to prevent heat stroke please visit https://t.co/k6QZpdQCOE pic.twitter.com/LN90q56dht