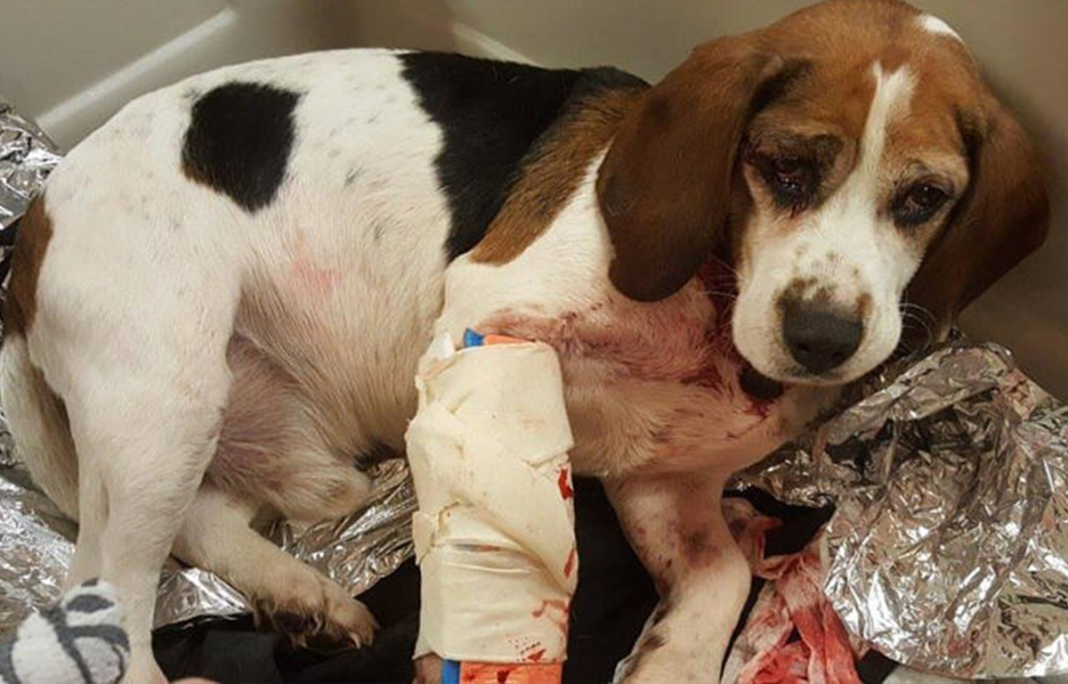 Anyone with information that leads to the whereabouts of people who threw two beagle mix dogs from a moving vehicle on Interstate 81 in the Whitney Point area of New York could be $16,500 richer. The incident happened on December 12 around 9:30 a.m. Local, state and national animal welfare agencies have teamed up with New York State Police to offer the reward.

“The reward is $16,500 for information leading to the conviction of the people who tossed the animals from a blue Dodge Durango on I-81 south between the Marathon and Whitney Point exits on Wednesday, December 12 around 9:30 a.m.”

State police and animal welfare agencies have partnered to reward $16,500 to anyone who has information about the motorist who threw Trooper and Adam out of a moving vehicle. (Broome County, New York) https://t.co/wK1J9K9og4

Fortunately, the two dogs survived thanks to a Good Samaritan truck driver, who pulled over to the median after he saw someone roll a rear passenger side window down and throw the dogs from the window. He recalled that the vehicle was “very dirty and had rust along the hatch near the bumper area.”

The truck driver from Syracuse, NY, got out of his truck and ran to help the dogs immediately. Police arrived soon after, having noticed the tractor-trailer parked in the left lane with the door open. Upon investigating, they saw the driver carrying a badly injured dog. A smaller dog followed along behind him.

“He seemed to be very angry that somebody could do such a despicable act to dogs,” said NY State Police Trooper, Aga Dembinska.

According to a Facebook post by the police department, the dog received a splint on the scene thanks to a K9 handler.

“A New York State Police K9 handler bandaged the injured dog to stop bleeding and splinted its leg while other troopers kept the dog warm in a warming blanket and in the truck driver’s sweatshirt. The smaller dog was fed dog biscuits and ate half a box.”

Multiple agencies and one private donation were pooled together to offer the reward.

“The following agencies have contributed: the Animal Legal Defense Fund $10,000, People for Ethical Treatment of Animals $5,000, the New York State Humane Association $1,000 and a private donation $500.”

Troop C: A reward is now being offered in the conviction of the suspect(s). New York State Police at Homer continue to…

Following the incident, the Broome County Humane Society took possession of the dogs. Trooper had two fractured legs, broken ribs and a lung contusion. The dog required care at the Colonial Animal Hospital in Ithaca. He received surgery to amputate one of his front legs. According to PEOPLE, he pulled through the surgery and is adapting, learning how to walk on three legs.

The rescuers named the smaller dog “Adam” after the truck driver. The injured dog was named “Trooper” in honor of the officers on the scene. Trooper may be between six and eight years old. Adam may be around five years old. Amazingly, he only suffered road rash from the interstate and escaped serious injury.

In a recent update, the Humane Society said the dogs were both doing OK. They have received a flood in inquiries about the well-being of the two dogs as well as donations to pay for Trooper’s medical care.

“Trooper and Adam are both doing well. Trooper is improving each day and Adam was neutered today and everything went great with him!”

Adam appears to be enjoying the holiday season!

Trooper Update: Gaining weight, eating well, loves attention and his comfort level is good!As for Adam, well, these pictures say it all!

Posted by The Broome County Humane Society on Friday, December 21, 2018

Broome County Humane Society Director, Karen Matson, told WBNG that the truck driver may be considering taking Trooper home to live with him.

“What’s very endearing about this is that the gentleman who saved him on the highway is very interested in making his home the forever home for these dogs,” said Matson.

Matson reminded everyone that people can find help if they decide they can’t care for their pets anymore.

“There are options for people who no longer want to keep their pets. Take them to a shelter, call your neighbors, take them to a police station, take them to a fire station. Don’t dump them just reach out to some agency that can assist you in finding the right resources to place animals in a safe environment.”

If the police don’t get a lead from the public, they hope that the truck driver’s dashboard camera may provide the clues they need to find the person/s responsible.

Fortunately, the Humane Society reported that they received enough donations from generous caring people to pay for Trooper’s medical care. Now any leftover donations will be used for the hundreds of animals in their care. If you would like to donate to the Broome County Humane Society, you may do so at their website.