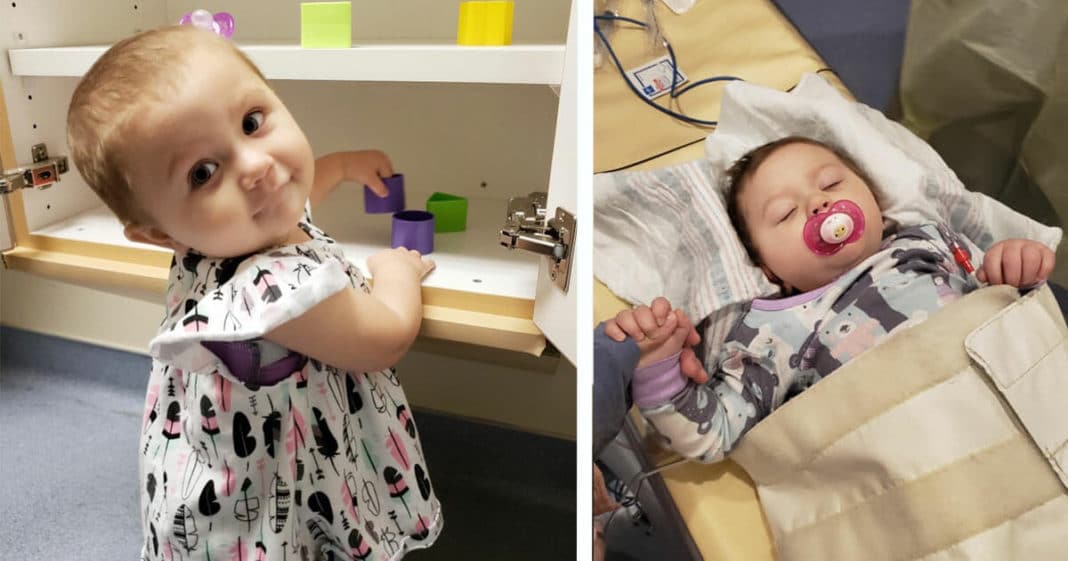 According to the Mayo Clinic, neuroblastoma is a type of cancer most commonly found in children under the age of five. It’s caused by “immature nerve cells” and can develop in different areas of the body, but it is most often found near the adrenal glands.

Treatment for this cancer can include chemotherapy, radiation, a bone marrow transplant, immunotherapy, and surgery. A patient’s treatment largely depends on the stage of their neuroblastoma.

The five-year survival rate, which mostly depends on the child’s risk factor, varies, but it’s usually higher than 50 percent — almost a coin flip.

Some may think those are relatively good odds for cancer but don’t let that number fool you.

Neuroblastoma can be an extremely difficult cancer to treat, especially when a child is diagnosed with stage 4.

Molly Hughes, now a 21-month old toddler, was diagnosed with stage 4 neuroblastoma in 2017. Her mother, Chelsa Hughes, told CNN that the disease had spread throughout much of Molly’s tiny little body.

To fight the disease, Molly had to undergo a full treatment plan. For 15 months, the child spent a total of 130 days in the hospital where she received stem cell transplants, chemotherapy, radiation, immunotherapy, and surgery.

“We’re just thankful that she made it through all that treatment,” Chelsea said. “It was tough. She got really, really sick. The treatments are just so harsh on [children’s] bodies.”

Chelsa also told CNN that one of her daughter’s treatments actually caused some hearing loss and now the 21-month old needs to wear hearing aids.

But after five torturous rounds of chemotherapy, Chelsa received the miracle phone call she’d been waiting for.

“I kinda just fell to the ground after I got off the phone and I just hugged for her like five minutes,” she told WKBO.

Celebrating our little wonder woman’s last day of treatment!! Molly finishes her oral medicine tonight & that is the end…

The little warrior who endured more than most people will their entire life received the news that she was in remission. Molly’s family was thrilled.

In celebration of this wonderful news, Molly’s family plans on taking a trip to the beach. During her treatment, it was challenging for Molly to take baths or play in the water, something she’s always loved to do, because of the IV in her chest.

But now, Molly will be able to splash around till her little heart’s content.

While Molly’s family is relieved that she’s in remission, Chelsa shared on Facebook that they still need a lot of prayers to beat this illness.

“Neuroblastoma has a high risk of relapse, so she started a trial drug yesterday that helps prevent relapse, and she will take this for two years and will have scans every three months,” she told PEOPLE. “A lot of people have been saying she’s ‘cancer free’ but she’s not technically cancer free for five years, but she is in remission and her scans showed no evidence of disease.”

The term warrior seems somewhat inadequate to describe this little girl’s toughness. Let’s shower Molly and her family with lots of positive energy and as many prayers as we can.