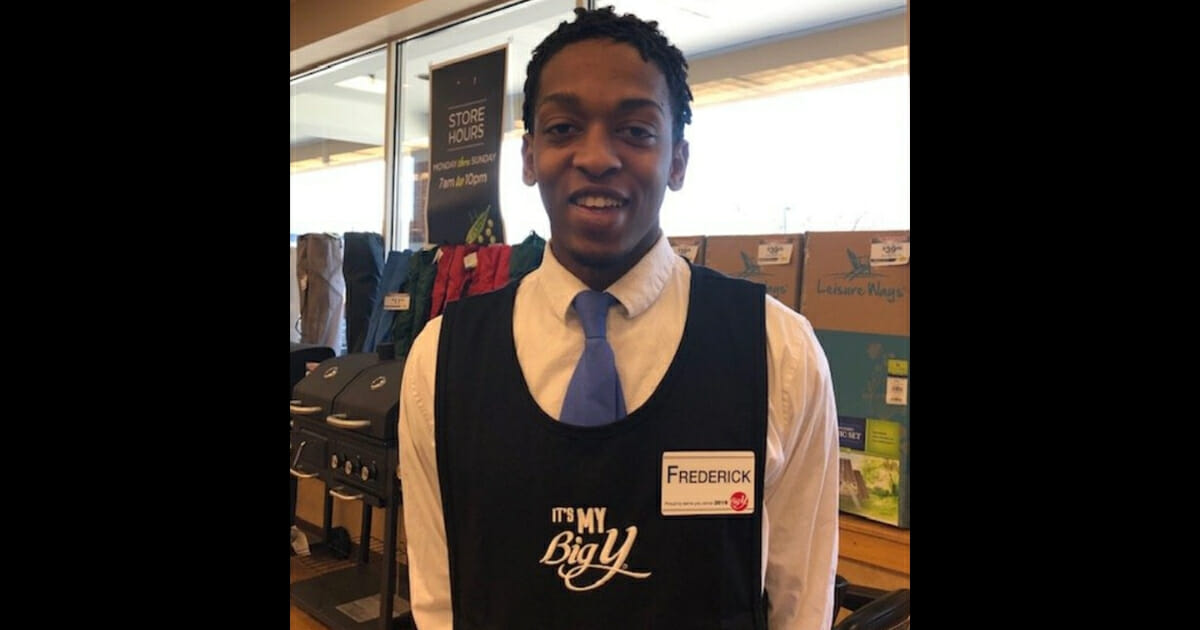 You don’t have to look far to find thousands of stories about human greed, malice, and cruelty put out on the internet every day.

What’s often harder to find are stories about everyday people going above and beyond to help another human out of the kindness of their heart.

The low-key acts of kindness may seem rare, but in truth, they make up the bedrock of human civilization. Without them, we would have destroyed ourselves many times over.

One such example recently took place in Massachusetts.

As he was bagging groceries for a senior woman who was in the process of checking out, Frederic noticed that she didn’t have enough money to pay for her items.

Anyone who’s been in this type of situation can relate to the embarrassment, and shame one feels when they come up short on funds to pay for groceries. It’s one of the most horrible and depressing feelings in the world.

Another customer in line also noticed the lady’s predicament, too.

On Twitter, Big Y tweeted about Frederick’s story, explaining to everyone what a fine young man he is, and how he stepped up to help a customer in need.

“While I was checking out I noticed an elderly lady in the next lane who didn’t have enough money to pay for her order,” the anonymous customer told Big Y.

“The young gentleman who was bagging her groceries gave her $20 so she could pay for her order,” they continued.

“Helping one another is what it’s all about!” a commenter wrote.

Frederick definitely deserves a standing ovation; not many people would reach into their pockets to help another person out the way he did.

A Greenfield customer commented: "While I was checking out I noticed an elderly lady in the next lane who didn't have enough money to pay for her order. The young gentleman who was bagging her groceries gave her $20 so she could pay for her order." WOW- great job Frederick! #bigy pic.twitter.com/iq1CikExGl

However, it seems that Frederick isn’t the only Big Y employee with a big heart. Their Twitter feed is full of other stories featuring other acts of kindness by other Big Y employees.

Anna from Torrington was also praised for rushing to catch up to a customer in the parking lot who had forgotten an item during checkout. “A can of soup was forgotten when the cashier was bagging, and Anna came out into the parking lot and brought it to me,” a customer commented to Big Y. “Nice job!”

A Torrington customer commented: "A can of soup was forgotten when the cashier was bagging and Anna came out into the parking lot and brought it to me. Nice job!" #bigyfoods #bigy #livingourvision pic.twitter.com/MXCyKuCYEK

Then there’s the story of Loreta from Marlborough who earned recognition for her patience during a complicated transaction with a customer. Loreta was terrific helping me when I had not yet received my Silver Savings card,” the customer said.

“She was incredibly patient & helpful while getting my card number,” they continued. “She even kept thanking me for my patience! Outstanding customer service!”

Tom Peters, author of “Little Big Things” spoke of the need for companies to celebrate and promote this kind of customer service.

“Celebrate what you want to see more of.” ~Tom Peters

More companies would do well to take a page from Big Y’s playbook, and their business won’t only be a place people want to shop, but more importantly were great people like Frederick, Loreta, and Anna would want to work.