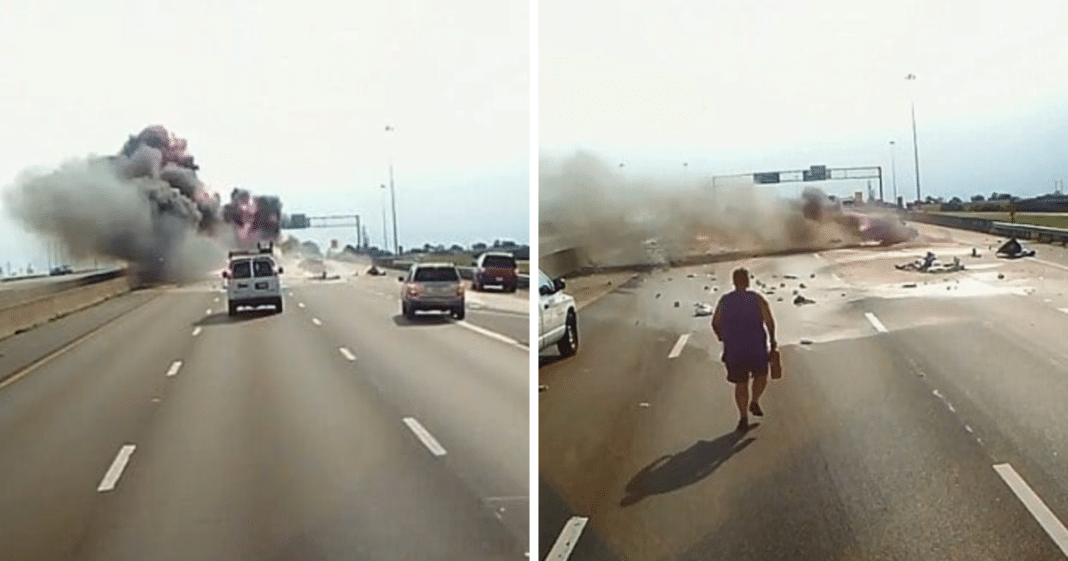 People tend to display their real character when faced with life-threatening situations. One such person is professional truck driver David Fredericksen, who was recently faced with a life or death choice. 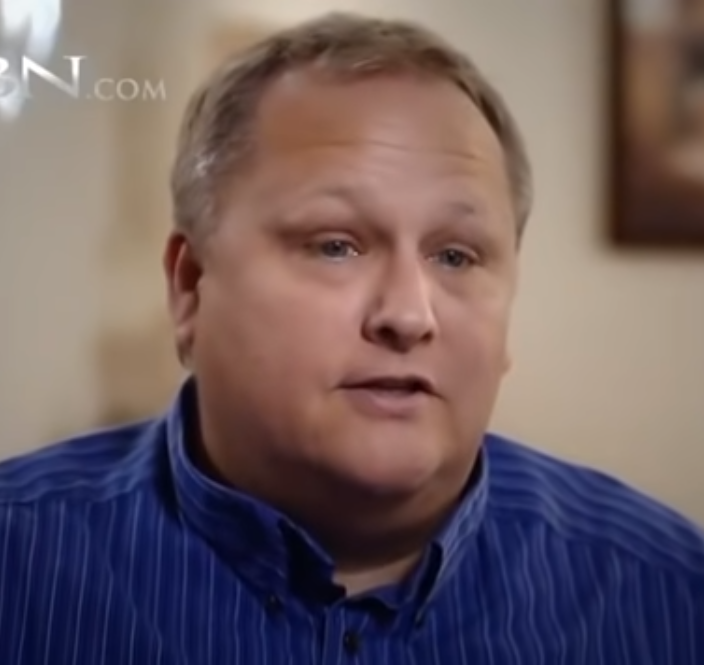 One day, David witnessed a car driving at 70mph collide with an 18 wheeler’s gas tank while driving along the I-10 Freeway in Gulfport, Mississippi.

Not surprising, the scene was quickly transformed into a fiery inferno complete with a huge fireball and thick clouds of black smoke were pouring into the sky. 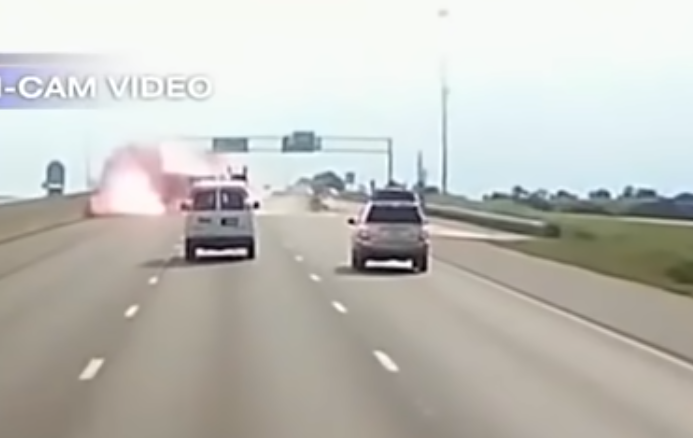 Without hesitation, David knew right away what he had to do, as he raced toward the blazing car wreck on the freeway, giving not a second thought to his safety to save the driver and her one-year-old granddaughter.

He did all this while the other drivers watched from the relative safety of their vehicles. 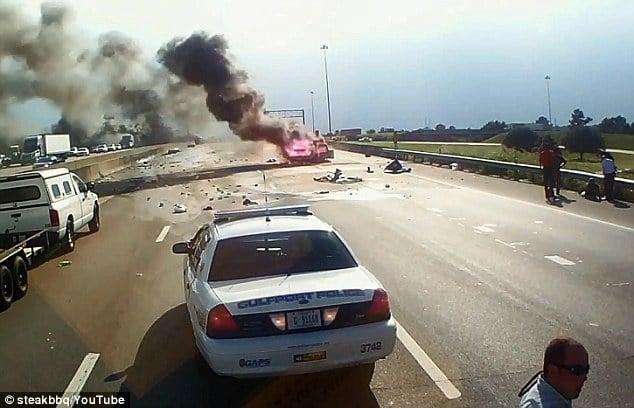 “I just caught a glimpse of the front grill of a car that looked like it was going in the wrong direction. It was a pretty big explosion — and then the road, the car, everything — was on fire.”

Walter Letterman, Frederickson’s partner, believed that everyone had to be dead. Even though Fredericksen feared his partner was probably right, he still knew he had to do something. So he stopped his vehicle at a safe distance, grabbed his fire extinguisher and ran towards the blazing inferno. 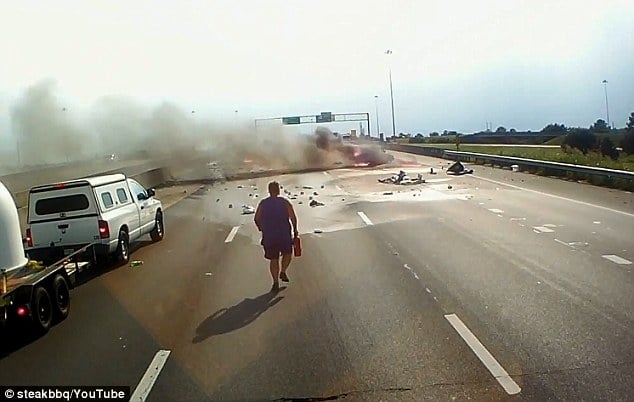 The truck driver did his best to get the flames under control upon reaching the crash site.

HE SAID: “WHEN I GOT OUT OF THE TRUCK AND I PULLED THE PIN [OF HIS FIRE EXTINGUISHER], I JUST AUTOMATICALLY STARTED PRAYING, ‘GOD PLEASE DON’T LET ME HAVE TO DEAL WITH SOMEBODY HALFWAY BURNED ALIVE, SCREAMING, OR HAVE TO SEE KIDS IN HERE. I MEAN I DIDN’T WANT TO SEE SOMETHING LIKE THAT. MY FIRST REACTION WAS THAT THEY WERE DEAD.” 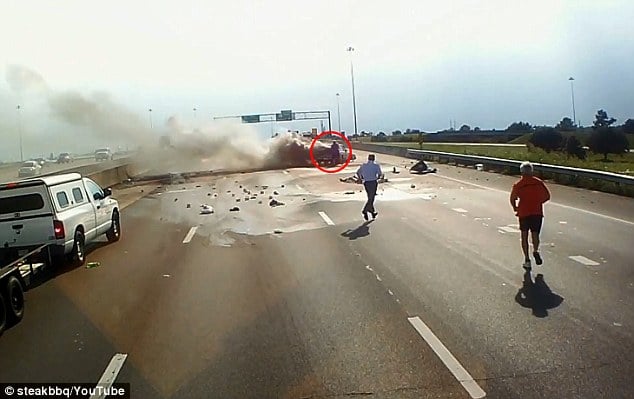 Thankfully he was wrong. In the middle of the chaos and terror, he caught a glimpse of something that demanded his full attention. In an interview he said:

“I saw this little head pop up in the back window, and immediately, I thought, ‘Wow, they’re alive!” 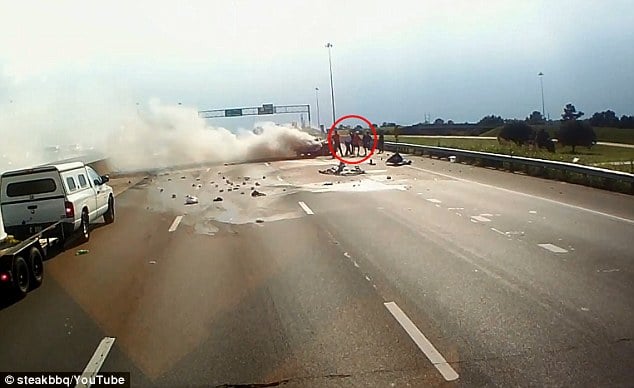 It turned out that a 51-year-old grandmother and a one-year-old toddler were trapped inside.

“We noticed there was a lady in the front, kicking the front seat – the door, trying to get out, and when we opened the door, I noticed a 1-year-old little girl in the back seat,”Fredericksen explained.

“I heard the metal bending. I’m a pretty good-sized guy, and if you watch the video, you can see that I’m struggling pretty hard to get it open.”

Using every ounce of his strength, and calling for help from above, Fredericksen doggedly pushed on. He asked God to deliver him a miracle, and that’s precisely what he got.

Within minutes, other drivers got out of their vehicles to come and help him, together they manage to tear the door open.

Both the toddler and his grandmother were quickly taken away to safety, just in the nick of time.

No sooner then they had made it out of the vehicle, did the car go up in flames, leaving only a burning blackened husk of charred metal.

Scott Swanson, the man who was driving the truck involved in the accident, admitted: I don’t know how we all made it through that.” 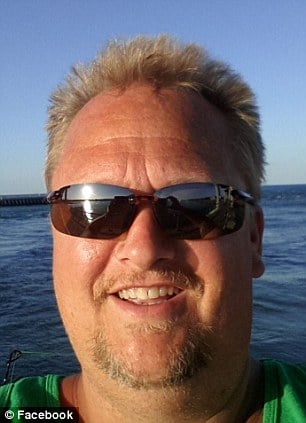 Adding to the mystery of how a tragedy was narrowly avoided, Fredericksen wasn’t burned by the metal, even though he touched it with his bare hands.

“The car was on fire, and I didn’t burn my hands. It wasn’t hot,” Fredericksen said. He believes God intervened, using him to help rescue the two victims.