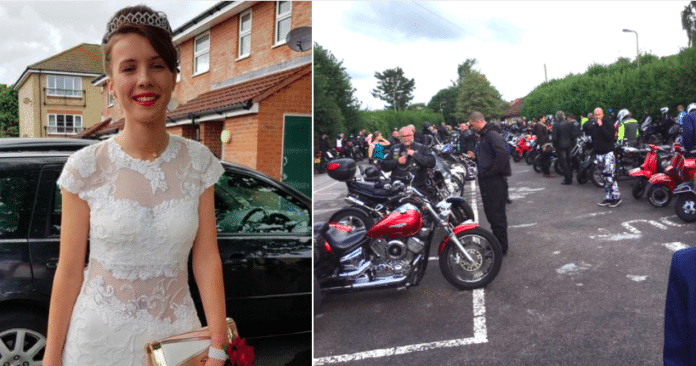 The utter kindness of complete strangers is incredible. With all the violence and nastiness in our world, shown in the media, and on social media, it’s so refreshing to know that there are still real people whose mission is to make someone’s life easier – they want to make them smile and help create a memory that will last a lifetime.

Bullying is unacceptable. It isn’t a right of passage to survive cruel taunts from classmates; it’s an intolerable act all communities, schools, and families must push to end for good.

Shannon is a 16-year-old high school student with a boyfriend and a few close friends. She suffers from bowel disease, ulcerative colitis, and arthritis and is sometimes hospitalized for weeks at a time.

These frequent absences brought on by her illness caused Shannon to be tormented by her classmates. These bullies don’t understand Shannon’s illness, nor do they bother to try to know the young girl behind the affliction.

Shannon’s mom, Claire, talked about the cruelty Shannon has repeatedly faced at the hands of her peers: “It was horrendous,” she said. “It’d been going on for such a long time. I tried so hard to put a stop to it, but the school didn’t help us. I just felt lost really. There was nothing I could do but let her talk to me.”

It’s unfortunate and neglectful of Shannon’s school to ignore this problem that exists in so many schools. If the school administrators were proactive in dealing with bullying, Shannon would have a better experience and wouldn’t have missed out on a special event most teenagers look forward to attending.

On prom night, Shannon went to her mother in tears. Even though she had a lovely dress and friends and a boyfriend she wanted to see that evening, Shannon didn’t want to go to her school prom. It was the escalation of the bullying that made Shannon change her mind.

“I didn’t want to feel uncomfortable for the whole night,” she said. “I didn’t want to miss out on the few close friends I have [and] I wanted to really badly and [the bullying] got worse and worse.”

Heartbroken, Claire posted a picture of Shannon all dolled up in her $600 prom dress on Facebook. “She should have gone to prom tonight and worn this beautiful dress but because of bullies she chose not to go,” Claire explained in her post.

While social media has been used for bullying, it also has the magical ability to change lives for the better. Many people were touched by Claire’s post and the photo grew in popularity.

Members of their local community started putting together a makeup prom for Shannon. Strangers volunteered their time by dropping by Shannon’s house to do her nails, hair, and makeup.

By the time Shannon was ready to go, a team of 120 bikers from the Gosport Scooter Club had arrived to escort Shannon to her surprise prom on a three-wheeler.

Claire spoke about her neighborhood’s response: “[The bikers] came into the street. Everyone was coming out of their houses watching, wondering what was going on,” she said.

The bikers took Shannon to the venue where no bullies were allowed. The teenager was greeted by the organizers of the event, some of whom Shannon didn’t even know. Her close friends and boyfriend were also there to dance the night away.

Claire grew emotional when talking about Shannon’s special night. “It was just so nice to see so many wonderful people, people we’ve never met before. People wanted to make her happy,” she said. “It was surreal.”

We’re so glad Shannon had an awesome time at her special prom. The bullies didn’t win, good prevailed, and the kindness of strangers won the day.

Were you touched to see what these strangers did to make Shannon’s prom night special? So share this!