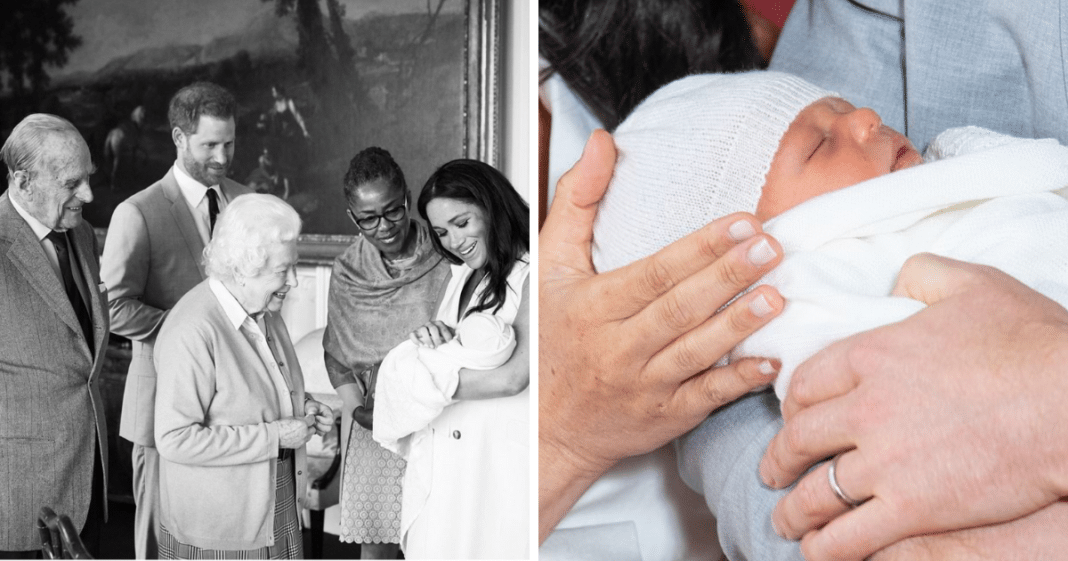 The waiting game is over!

Prince Harry and Meghan, the Duke and Duchess of Sussex, have officially announced the name of their first child, a son born on Monday, Archie Harrison Mountbatten-Windsor.

The royal couple made the exciting announcement Wednesday via their official Instagram account, ending several days of feverish speculation about the baby’s name.

The Duke and Duchess of Sussex are pleased to announce they have named their first born child: Archie Harrison Mountbatten-Windsor This afternoon Their Royal Highnesses introduced Her Majesty The Queen to her eighth great-grandchild at Windsor Castle. The Duke of Edinburgh and The Duchess’ mother were also present for this special occasion. Photo credit: Chris Allerton ©️SussexRoyal

The announcement came with a black and white photo showing a beaming Queen Elizabeth II meeting her new grandson. The monarch was flanked by her husband Prince Philip, her grandson Prince Harry while at Meghan’s side stood her mother, Doria Ragland.

The first pictures of Prince Harry and Meghan Markle’s baby are here!

We couldn’t have been more excited to see #BabySussex and Harry and Meghan seemed thrilled with their new arrival! ? ? Check our Stories for all the details, and watch the full interview in our IGTV.

Royal fans around the world were given their first ever glimpse of the Duke and Duchess of Sussex’s son today as Baby Sussex made his very first public appearance along with his thrilled parents Prince Harry and Meghan.

The boy, who is seventh-in-line to the throne, was lovingly cradled by first-time father Harry at Windsor Castle.

Harry and Meghan’s #royalbaby just couldn’t be cuter! Get all the details via the link in our bio. ??? #princeharry #meghanmarkle

The baby’s name has not yet been revealed, but beaming Harry and Meghan seem to be loving every moment of parenthood. A radiant Meghan declared: ‘It’s magic, it’s pretty amazing. He’s just been the dream so it’s been a special couple of days.

‘I have the two best guys in the world so I’m really happy. He has the sweetest temperament, he’s really calm.’

Baby Sussex is revealed to the world and he is so cute!!! ???

Baby Sussex is revealed to the world and he is so cute!!! ???

Congratulations to the happy couple, and welcome to the world little one! We can’t wait to see more of you!

?➡️? Harry and Meghan have officially said goodbye to being a family of two ♥️ What a gorgeous moment! #princeharry #royalbaby #meghanmarkle #babysussex

Proud new dad Harry has been seen gushing over his bride and their new son after the birth of their bundle of joy was announced just yesterday:

“I’m so incredibly proud of my wife,” Harry said. “As every father and parent would ever say, your baby is absolutely amazing, but this little thing is absolutely to die for so I’m just over the moon.”

Prince Harry was a mere 12-years-old when his mother, Diana, Princess of Wales, died in an infamous car accident in Paris.

Just like his beloved mother was, Prince Harry has been actively involved with charitable organizations that strive to make the world a better place.

August 13, 1988. Princess Diana with Prince Harry on holiday at the Palma de Mallorca in Spain.

When Harry and Meghan Markle tied the knot last year, the couple paid tribute to Diana by way of Meghan wearing a wedding ring crafted with diamonds from the late Princess of Wales’ personal collection. In addition, St. George’s Chapel was filled with Diana’s favorite flowers.

So it came as no surprise that the Duke and Duchess of Sussex have included a touching tribute to the late Princess Diana in their announcement confirming they have welcomed a baby boy.

A statement released by the Palace revealed that, in line with royal protocol, the Queen was among the first to be informed of the news.

However – along with the Duke of Edinburgh, the Prince of Wales, the Duchess of Cornwall and the Duke and Duchess of Cambridge – Diana’s siblings Lady Jane Fellowes, Lady Sarah McCorquodale and Earl Spencer were also notified of the news.

This differs from the birth of Prince Louis in April 2018, when Prince William and Kate informed The Queen, The Duke of Edinburgh, The Prince of Wales, The Duchess of Cornwall, Prince Harry, along with ‘members of both families’.

The Palace also confirmed that Meghan’s mother Doria Ragland was staying with the couple at Frogmore Cottage, however there was no mention of whether her father Thomas Markle had been informed of the news.

In any case, it’s a nice gesture made by Prince Harry, and one that shows just how much Diana’s memory means to him.

Prince Diana may be gone, but her legacy lives on today and always.

If you’d like to join us in commemorating Princess Diana’s memory and congratulating Prince Harry and Meghan – So Share This!

Meghan Markle and Prince Harry are the proud parents of a baby boy!

The royal couple announced the joyful news on Instagram. They shared their happiness of the birth of their newborn on @SussexRoyal, their new Instagram account that was launched on April 2.

We are pleased to announce that Their Royal Highnesses The Duke and Duchess of Sussex welcomed their firstborn child in the early morning on May 6th, 2019. Their Royal Highnesses’ son weighs 7lbs. 3oz. The Duchess and baby are both healthy and well, and the couple thank members of the public for their shared excitement and support during this very special time in their lives. More details will be shared in the forthcoming days.

“The Duchess and baby are both healthy and well, and the couple thank members of the public for their shared excitement and support during this very special time in their lives. More details will be shared in the forthcoming days.”

As per BBC, Prince Harry has stated that both he and Meghan are “absolutely thrilled” to become parents, and wished to thank the public for all their kind words and support.

The name of the baby boy, who is Harry and Meghan’s first child, will be announced in due course.

The royal couple previously announced that they are keeping the plans around the arrival of their baby private, which means royal fans should not expect for Meghan to pose on the steps of a hospital like Kate Middleton did after the birth of each of her three children.

Today is #earthday – an opportunity to learn about, celebrate and continue to safeguard our planet, our home. The above, Their Royal Highnesses in Rotorua, New Zealand. Of the 170 different species originally planted in the early 1900’s, only a handful of species, including these majestic Redwoods, remain today. Next, we invite you to scroll through a series of 8 photos taken by The Duke of Sussex©️DOS sharing his environmental POV including: Africa’s Unicorn, the rhino. These magnificent animals have survived ice ages and giant crocodiles, amongst other things! They have adapted to earth’s changing climate continually for over 30 million years. Yet here we are in 2019 where their biggest threat is us. A critical ecosystem, Botswana’s Okavango Delta sustains millions of people and an abundance of wildlife. Huge bush fires, predominantly started by humans, are altering the entire river system; the ash kills the fish as the flood comes in and the trees that don’t burn become next year’s kindling. Desert lions are critically endangered due partly to human wildlife conflict, habitat encroachment and climate change. 96% of mammals on our ? are either livestock or humans, meaning only 4% remaining are wild animals. Orca and Humpback whale populations are recovering in Norway thanks to the protection of their fisheries. Proof that fishing sustainably can benefit us all. Roughly 3/4 of Guyana is forested, its forests are highly diverse with 1,263 known species of wildlife and 6,409 species of plants. Many countries continue to try and deforest there for the global demand for timber. We all now know the damage plastics are causing to our oceans. Micro plastics are also ending up in our food source, creating not just environmental problems for our planet but medical problems for ourselves too. When a fenced area passes its carrying capacity for elephants, they start to encroach into farmland causing havoc for communities. Here @AfricanParksNetwork relocated 500 Elephants to another park within Malawi to reduce the pressure on human wildlife conflict and create more dispersed tourism. Every one of us can make a difference, not just today but every day. #earthday

“This is a very happy time for Meghan and Harry,” says a source. “This baby has brought them even closer.”

Congratulations to the happy couple and best wishes! Soak in all of the newborn moments, they grow too quickly!