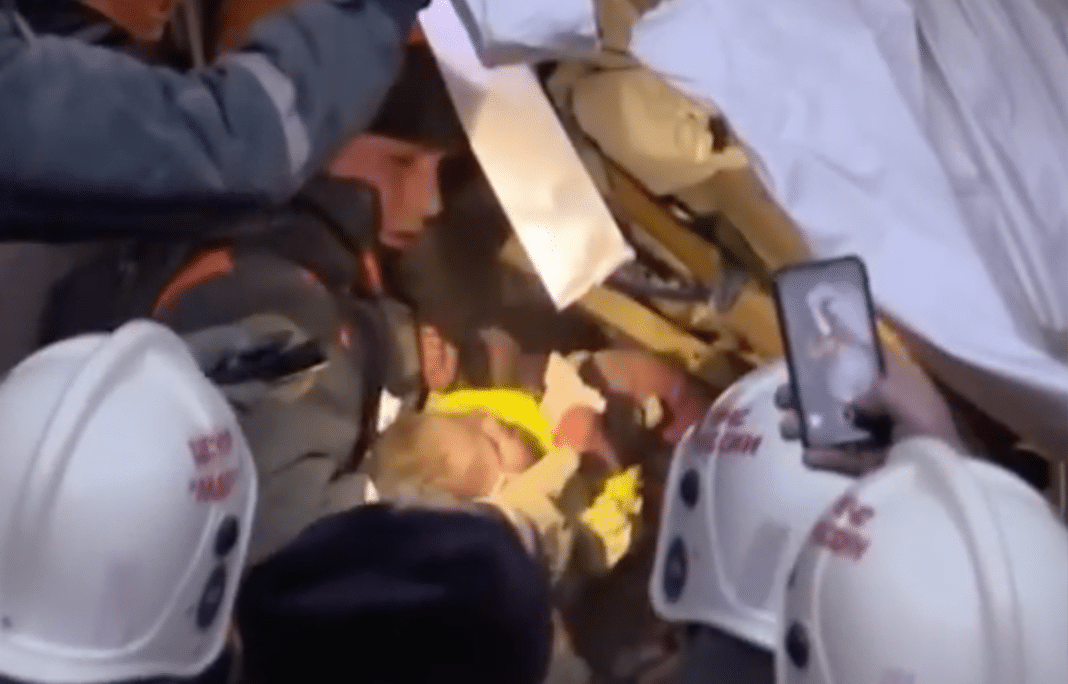 An infant’s father called it a “New Year’s miracle” when rescuers found Ivan Fokin, a 10-month-old boy after a Russian apartment building collapsed on Monday. The collapse in the city of Magnitogorsk, Russia, killed 39 people, but after 35 hours the baby was found alive buried in the rubble. What makes it even more astonishing is the temperatures during that time were as low as minus 4 degrees Fahrenheit.

Rescuers efforts were impeded because it was so cold. They blasted the building with hot-air cannons to try to try to work in the sub-zero temperatures, but were unable to find any survivors until they located the baby over two days after the explosion.

According to reports from USA Today, the rescue workers held a “minute of silence” to listen for any sounds from potential survivors. Then they heard tiny cries coming from the rubble. One of the rescuers described what happened next.

“Once we were sure, we started digging,” said Petr Gritsenko.

A 10-month-old baby was rescued from a partly collapsed apartment building in Magnitogorsk, Russia, surviving an apparent gas leak explosion and more than 35 hours in freezing temperatures https://t.co/t2iUjcZBum

Residents were asleep when the building fell right before dawn. Authorities said it was due to a gas leak, although unconfirmed reports suggested a terrorist attack when a minibus exploded a day later on the same street. The 10-story apartment building in the industrial city is 1,000 miles southeast of Moscow.

When Ivan Fokin was extracted from the debris on Tuesday, he was rushed by rescuers to Moscow children’s hospital, where he was listed in stable condition on Thursday, according to AP News. Russian news showed video of the baby recovering in the hospital.

The baby suffered from a head injury, fractures, hypothermia, frostbite, and what doctors called “crush syndrome,” described as “major shock and kidney malfunction characteristic of people trapped under heavy objects.”

After three days of searching, the baby was the only person found alive. A cat that survived the blast was found a day later. Fortunately, the baby’s family all survived. Olga Fokina, the baby’s mother, and her 3-year-old son managed to escape on Monday immediately after the explosion. Ivan’s father, Yevgeny Fokin, said he would probably have died had he not been working a night shift at the time. His bed was destroyed in the blast.

“I was sleeping on the couch with my older son, hugging him and the young one was sleeping in his baby bed,” Olga said on Russian TV.

“I and the older one fell down and quickly got out and I didn’t know what happened to the baby bed afterward.”

It’s astonishing the baby managed to survive the ordeal for so long. Russian authorities claimed it was due to being wrapped up with warm blankets in his crib, though that doesn’t seem to adequately describe it. Was is a miracle? You decide.

See the video from the Associated Press below: