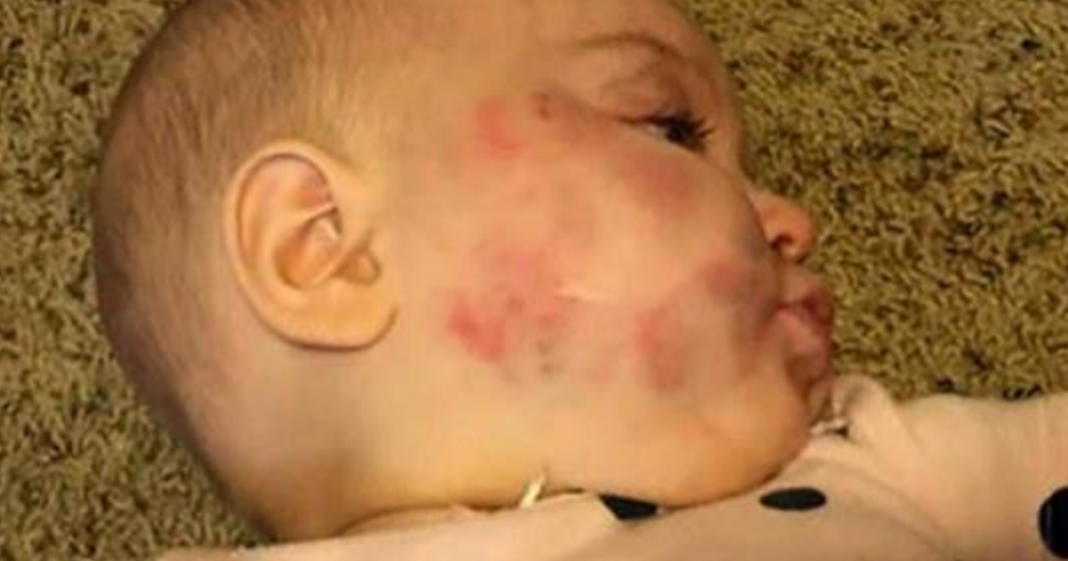 A Missoula, Montana mom was shocked and horrified when she found out that her baby had been subjected to eight to ten bites on her face at a Missoula drop-in childcare facility. 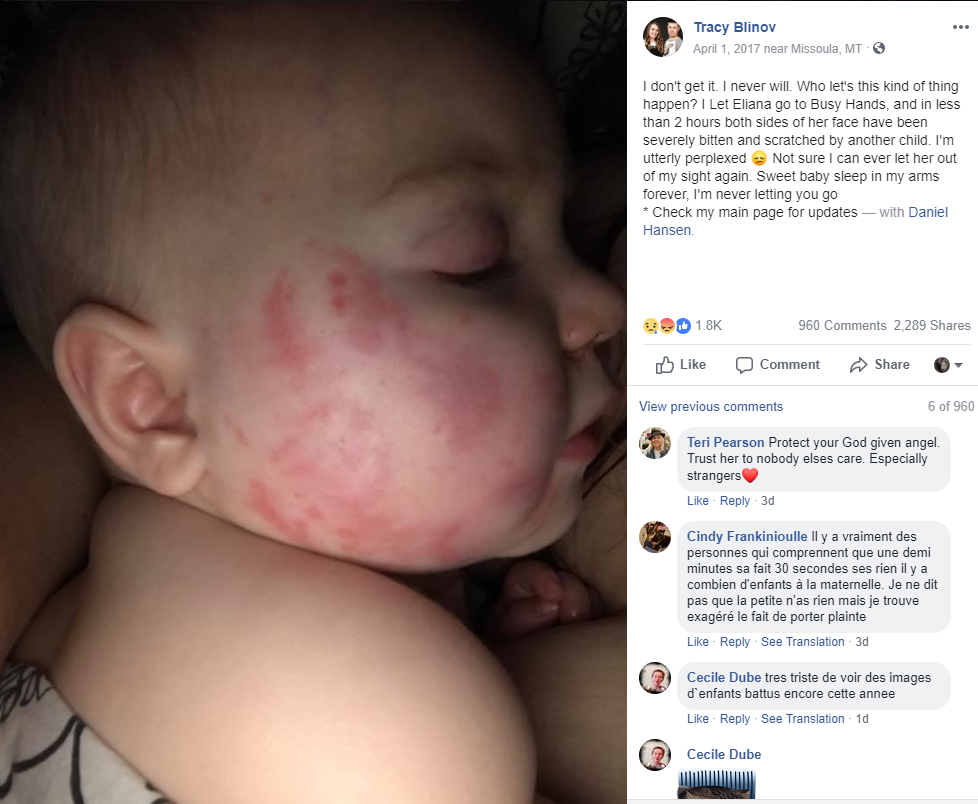 Tracy Blinov dropped her 7-month-old baby girl off at the Busy Hands Fun Center on a Friday evening. At one point during the evening, she and her husband received a call from the facility saying that their baby, Eliana, had been bitten. They rushed to the facility and were stunned when they saw bite marks all over the baby’s face. From Fox Montana:

“My initial reaction was very heartbroken, but I understand kids are sometimes kids,” Blinov said. “I had no idea the of the severity of it, initially. They made it sound like it was just one bite mark.”

As Tracy, her husband, and her father watched the surveillance video, they saw that Eliana was attacked by a two-year-old girl for a total of one minute and 29 seconds before facility staff intervened. Eliana was screaming.

Police and child protective service became involved and an initial report was filed. Furthermore, this isn’t the first incident that allegedly happened at this center. 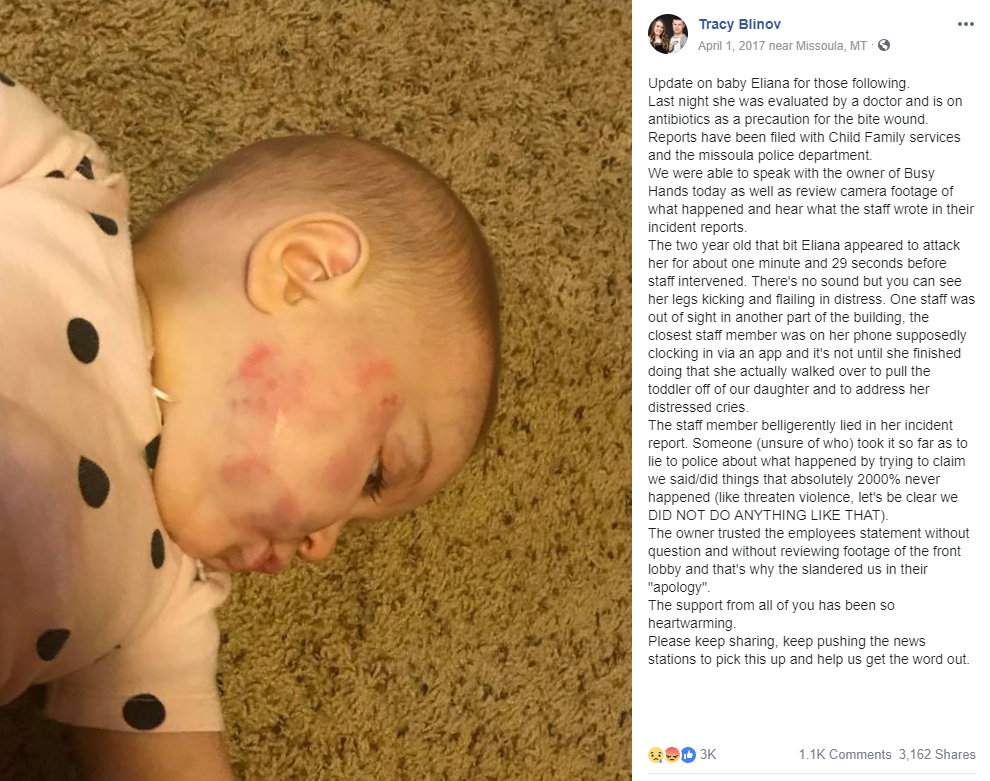 One of the owners of Busy Hands Fun Center confirmed the incident but insisted that the staff member separated the children as soon as she heard the screams.

Busy Hands is an unlicensed center and is not held to the standards as licensed facilities. That said, the owner said that they do hold themselves to the same standards.

“The state only requires a four-to-one ratio for infants, but we’re going to change that in the future and we’re going to do two infants to one adult so we’ll have a higher staff ratio that way,” said the owner.

After this incident, they’ll be holding themselves to higher standards, the owner said.

A Change.org petition was started that was titled “Shut down Busy Hands Drop In daycare so no more children will be hurt!” 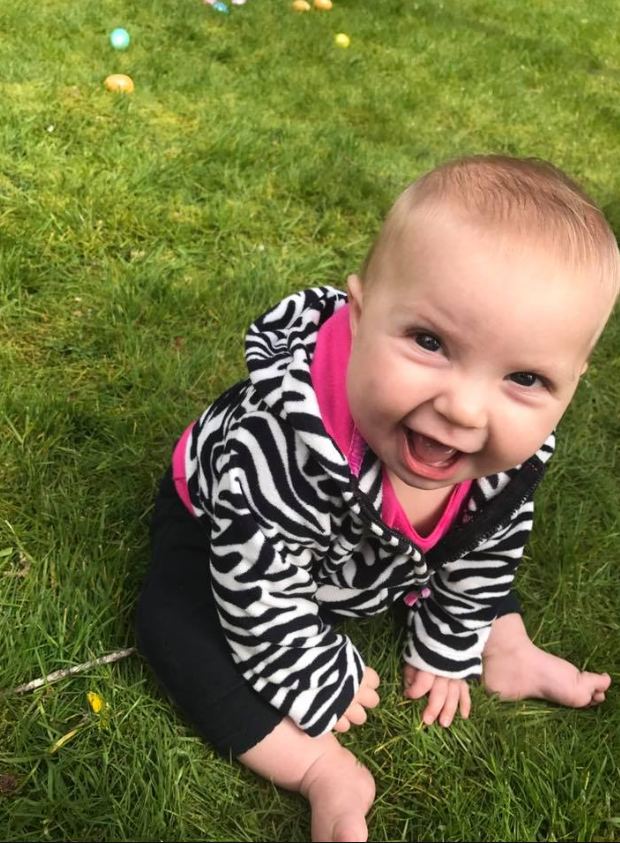 Eliana was put on antibiotics and Tracy and her husband have not decided if they’re going to press charges against the center. The baby is doing much better now, thank goodness. We hope she won’t be traumatized by this incident.

We called the number listed for Busy Hands and the woman who answered the phone said that there are new owners and management and it’s a whole new drop off center. She said Busy Hands closed almost a year ago.