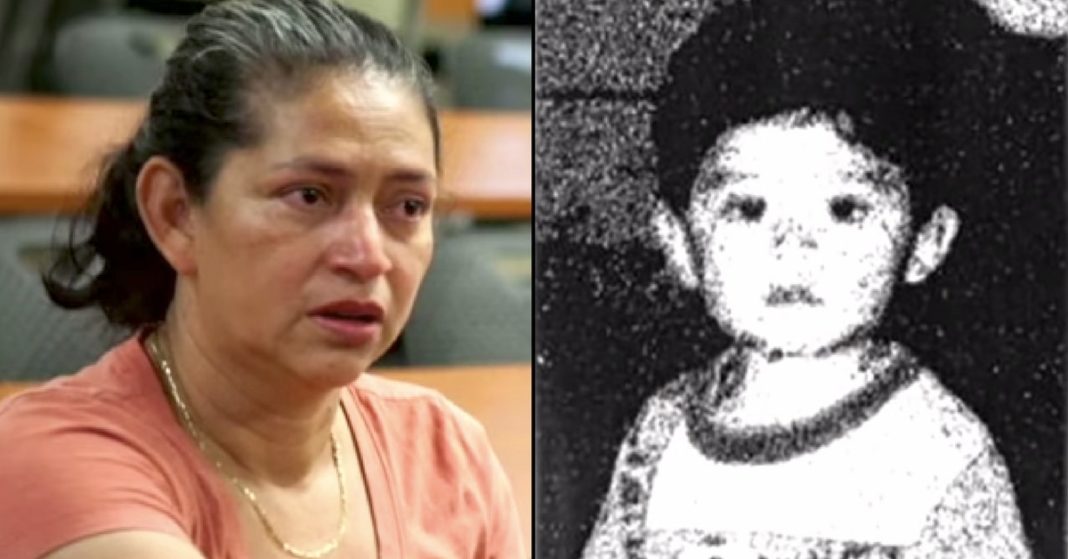 earing stories of children being abducted from their homes and lives is more than tragic. Sadly, a happy reunion between family and child doesn’t always happen. Finding the abductor and bringing them to justice doesn’t always occur either. But for one mother, after decades of waiting, she finally got the answers she was looking for.

Maria Mancia’s nightmare started one night in 1995. She returned to her home in Rancho Cucamonga, California, to find the place ransacked and her 18-month-old son gone. Worse still, all pictures and identifying information for her little boy were also gone.

It didn’t take long for Maria to figure out the abductor was the boy’s father, Valentin Hernandez, whom she was living with at the time. The abduction was so complete that Maria had to reach out to family in El Salvador to obtain a single photo of her little boy. She carried the picture with her always in hopes that she’d one day be with her son again.

Despite valiant efforts from police and law enforcement, the little boy and his fugitive father seemed to disappear altogether. The case went cold and eventually found its way to the desk of the San Bernardino County District Attorney’s Child Abduction Unit.

With just one tip, cases that have been inactive for years can break wide open, and that’s exactly what happened here. Investigators from the Child Abduction Unit received a tip indicating the boy, now a 22-year-old young man named Steve Hernandez, was residing in Puebla, Mexico.

The information was verified, but investigators knew they needed to tread lightly. They didn’t want to scare Steve and risk him running off, thus losing him once again before an actual confirmation could be made, so they proceeded with caution.

The elder Hernandez had gone missing and was presumed dead due to unspecified circumstances. Investigators requested a DNA sample from the younger Hernandez under the guise that it could help locate his father. He complied.

In actuality, investigators were using Steve’s DNA sample to compare it with one on file from his mother.

Investigators kept their intentions closely guarded. What if the samples weren’t a match? They’d end up destroying the life of a promising young man as well as the hopes of a mother still desperately searching for her lost child.

It took weeks for the DNA tests to be completed. When they finally came back, even the investigators were shocked to see that the samples were indeed a match.

It was time to break the news.

“Some detectives came to my house, and at first I was scared because I didn’t know what was going on, but then they told me they found him. They found Steven,” Maria told the San Bernardino Sun.

Investigator Karen Kragg had the task of delivering the fantastic news. She said Maria couldn’t believe her son was still alive.

For Steve, the news was a shock of a different sort. He had grown up believing his mother had abandoned him and his father. After learning the real truth, he was stunned.

“I didn’t know if she was alive or not and to get a call that says they found and that she had been looking for me, it was like a cold bucket of water. But it’s good. It’s good,” he said.

Because Steve is a natural-born citizen of the United States, he was brought back from Mexico where he was reunited with his mother at the San Bernardino DA’s office.

“Now this anguish that I’ve carried is gone now that I have my son back,” Maria said.

While learning these secrets of his past has been a huge shock and adjustment, Steve can’t wait to get to know his four younger siblings. An aspiring law student, he plans on attending university in the U.S. and doesn’t intend to return to Mexico.

When negativity rules the news broadcasts and social media feeds, it’s refreshing to see that not every story has a sad ending. We wish this mother and son many happy years together.

Were you shocked to see this mother and son reunited after so many years apart? Then share it!