Man overhears two soldiers whispering on the plane, gets to flight attendant as fast as he can 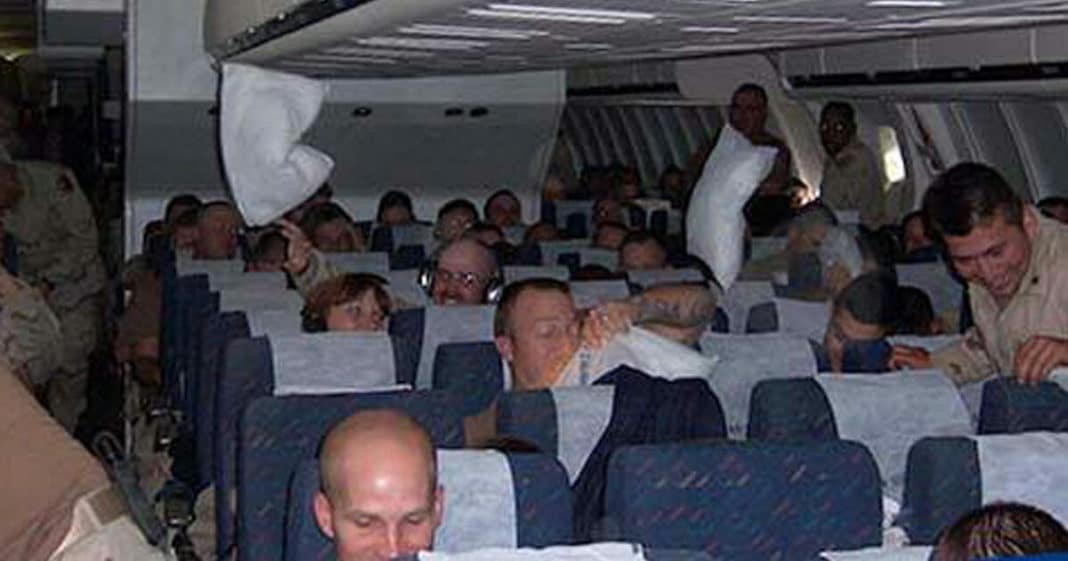 It is not proper etiquette to eavesdrop on other people’s conversations, especially strangers. But let’s be honest, it’s sometimes nearly impossible to avoid, especially within the tight confines of places like subways, buses, or airplanes.

That’s exactly what happened in this story, which takes place in the close quarters of a commercial airplane. It begins when one traveler happens to overhear a conversation between two gentlemen.

Following the incident, the passenger, identified as Denny Kukich, knew what he heard was so remarkable that he had to make it public.

The story was originally shared on the Facebook page “Love What Matters”:

“I put my carry-on in the luggage compartment and sat down in my assigned seat. It was going to be a long flight. ‘I’m glad I have a good book to read. Perhaps I will get a short nap,’ I thought.

Just before take-off, a line of soldiers came down the aisle and filled all the vacant seats, totally surrounding me. I decided to start a conversation.

‘Where are you headed?’ I asked the soldier seated nearest to me. ‘Petawawa. We’ll be there for two weeks for special training, and then we’re being deployed to Afghanistan.’

After flying for about an hour, an announcement was made that sack lunches were available for five dollars. It would be several hours before we reached the east, and I quickly decided a lunch would help pass the time…

As I reached for my wallet, I overheard a soldier ask his buddy if he planned to buy lunch. ‘No, that seems like a lot of money for just a sack lunch. Probably wouldn’t be worth five bucks. I’ll wait till we get to base.’

I looked around at the other soldiers. None were buying lunch. I walked to the back of the plane and handed the flight attendant a fifty dollar bill. ‘Take a lunch to all those soldiers.’ She grabbed my arms and squeezed tightly. Her eyes wet with tears, she thanked me. ‘My son was a soldier in Iraq ; it’s almost like you are doing it for him.’

Picking up ten sacks, she headed up the aisle to where the soldiers were seated. She stopped at my seat and asked, ‘Which do you like best – beef or chicken?’

‘Chicken,’ I replied, wondering why she asked. She turned and went to the front of plane, returning a minute later with a dinner plate from first class.

After we finished eating, I went again to the back of the plane, heading for the rest room. A man stopped me. ‘I saw what you did. I want to be part of it. Here, take this.’ He handed me twenty-five dollars.

Soon after I returned to my seat, I saw the Flight Captain coming down the aisle, looking at the aisle numbers as he walked, I hoped he was not looking for me, but noticed he was looking at the numbers only on my side of the plane. When he got to my row he stopped, smiled, held out his hand and said, ‘I want to shake your hand.’ Quickly unfastening my seatbelt I stood and took the Captain’s hand.

With a booming voice he said, ‘I was a soldier and I was a military pilot. Once, someone bought me a lunch. It was an act of kindness I never forgot.’ I was embarrassed when applause was heard from all of the passengers.

Later I walked to the front of the plane so I could stretch my legs. A man who was seated about six rows in front of me reached out his hand, wanting to shake mine. He left another twenty-five dollars in my palm.

When we landed I gathered my belongings and started to deplane. Waiting just inside the airplane door was a man who stopped me, put something in my shirt pocket, turned, and walked away without saying a word. Another twenty-five dollars!

Upon entering the terminal, I saw the soldiers gathering for their trip to the base. I walked over to them and handed them seventy-five dollars. ‘It will take you some time to reach the base.. It will be about time for a sandwich. God Bless You.’

Ten young men left that flight feeling the love and respect of their fellow travelers.

As I walked briskly to my car, I whispered a prayer for their safe return. These soldiers were giving their all for our country. I could only give them a couple of meals. It seemed so little…

A veteran is someone who, at one point in his life, wrote a blank check made payable to ‘The United States of America ‘ for an amount of ‘up to and including my life.’

That is Honor, and there are way too many people in this country who no longer understand it.’ ”

This story is just another small example of just how far a little humanity can go.

Like ripples on a pond, kindness spreads. And I’m sure this kind act is one these soldiers will never forget.