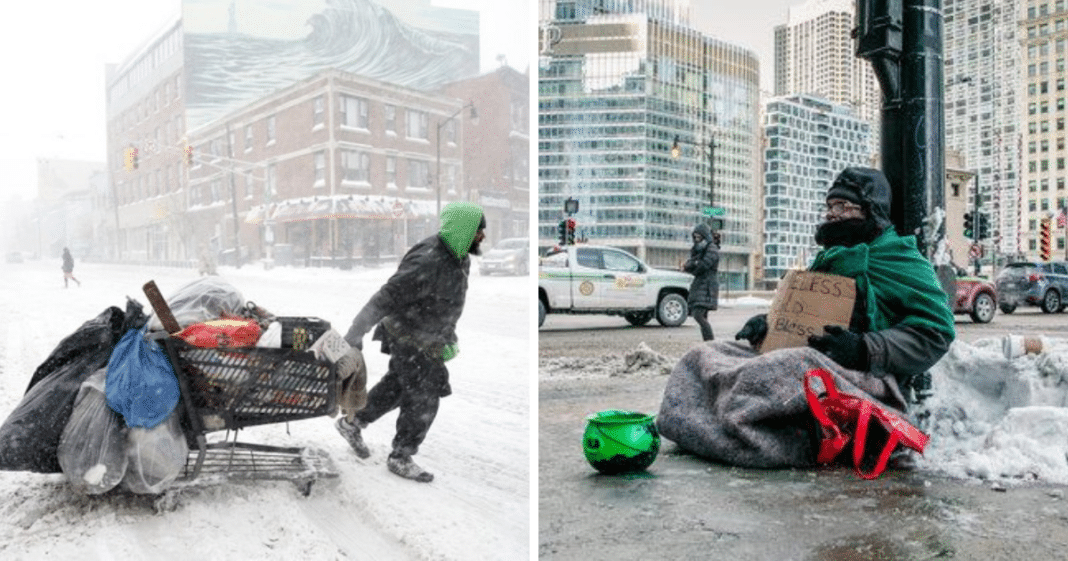 Temperatures in some Midwestern cities are expected to drop down lower than temperatures in Antarctica, Alaska, and Siberia. Homeless people are terrified, and city officials are concerned. In fact, some officials are warning people to not step outside for even a minute, it’s going to be so bad.

Tony Neeley, a homeless man in Chicago, was wearing wet tennis shoes on Tuesday and was holding hand warmers to try to keep his hands warm. He said this to The New York Times.

He said that he’s been trying to raise money to pay for a $45 a night motel room. But can’t homeless people go to shelters? It’s not that simple. First of all, shelters fill up. Second, many shelters are for women and children only. But even if there were enough shelters for men, there are other reasons that many homeless people fear them.

Some states are declaring emergencies and closing schools and universities. Museums are closing. Workers are being told to stay home. Yet homeless people have little to no options.

On Wednesday, temperatures may be in the negative double digits. In Milwaukee, there are about 900 homeless people. Outreach workers are on the streets around the city, trying to help people come indoors. Wendy Weckler, the executive director of Hope House, a shelter for families, said this.

“We’re always concerned, but especially when you can get frostbite in about eight minutes. The outreach workers are out looking for people, and trying to find the people who don’t usually come in and getting them somewhere safe.”

In Chicago, libraries, police stations, and community centers are all being turned into warming centers.

“No one in need of a safe or warm place to stay will be turned away,” Rahm Emanuel, Chicago’s mayor, said. “No one.”

However, when the weather gets better in a few days, the problem will still exist. From Douglas Schenkelberg, executive director of the Chicago Coalition for the Homeless reminded of that homelessness is a problem that persists.

“We’ll have this really bad weather through Thursday and then it will warm up some, and the scaled-up capacity will disappear, and you’ll see people back on the streets, and those people need housing,” he said. “That sense of urgency completely disappears when the crisis goes away.”

Our thoughts go out to these people. No human being should be homeless.