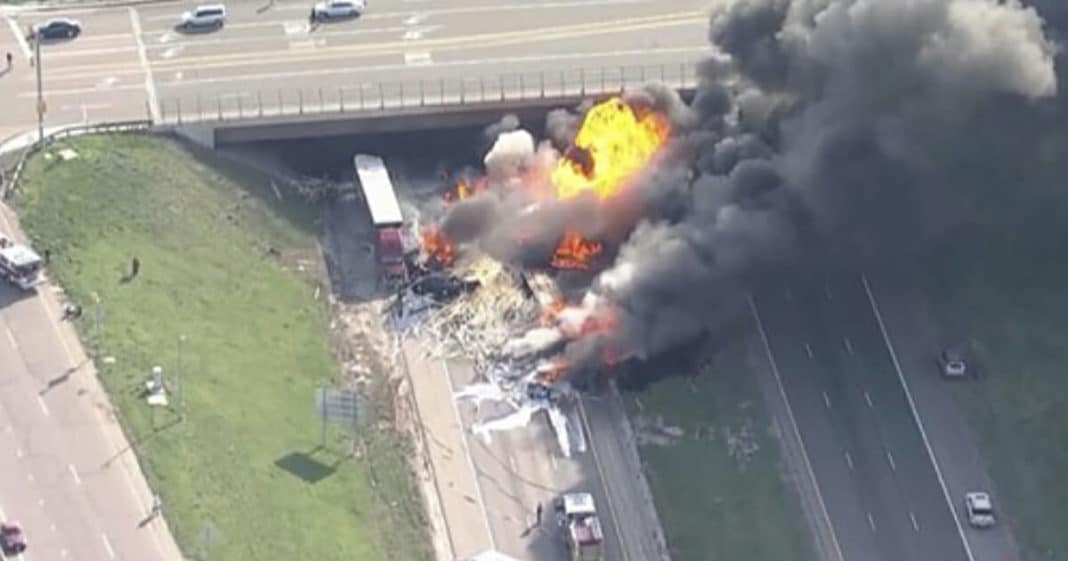 A tragic multi-vehicle crash shut down Interstate 70 in both directions in Lakewood, Colorado costing several people their lives.

According to the Lakewood Police Department, a tractor-trailer heading down a hill ran into slower traffic during the afternoon hours of Thursday, April 25.

EB I70 is CLOSED at Ward Rd by this crash. School bus, tanker, and several cars involved. No word on injuries but several children are being evaluated in the 2 ambulances on scene. #cotraffic @KOANewsRadio pic.twitter.com/Tf5rwVvdsB

Officials closed down the interstate as firefighters battled the flames from burning vehicles which also included multiple tractor-trailers.

Video footage from a helicopter captured the flames coming out of the vehicles.

At least six people were reported hospitalized after the accident, the exact number of dead has yet to be reported, but so far at least one person was reported killed in the crash.

“We have now confirmed multiple fatalities in this,” Countryman said at a press conference around 9 p.m. local time.

The official stated that they did not have an offical death toll.

“We still are just getting to the wreckage.”

“We have to try and figure out why this happened,” Countryman said.

Devastating scene on I-70 and Colorado Mills Pkwy where a deadly crash investigation continues. Tune in to #CBS4Mornings for the very latest #cotraffic @cbsdenver pic.twitter.com/OoGMy7DAvI

An eyewhitness reported seeing the semi plow into the slower traffic.

“THE SEMI COMING INTO THE SLOWER TRAFFIC. THERE’S GOT TO BE A REASON. WE’LL INVESTIGATE AND FIND OUT.”

A local YouTuber, Joshua MCCutchen, who goes by the name “Burger Planet,” was on the scene and captured footage of the horrific aftermath.

Let’s say a prayer for all those involved in this tragic incident.