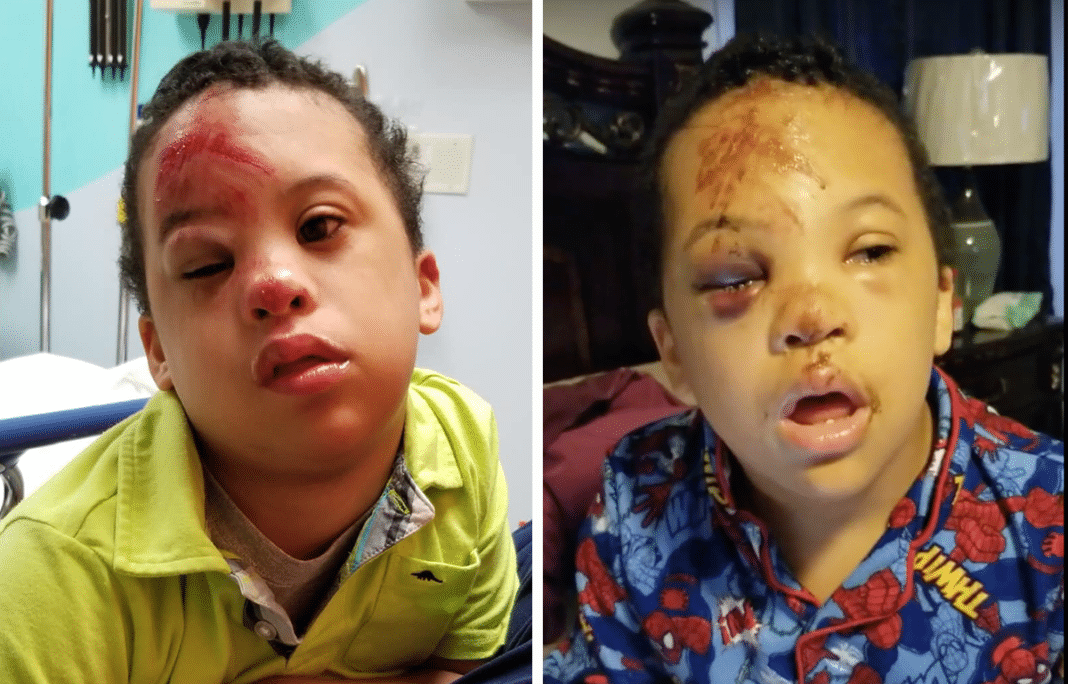 Resica Elementary School, in East Stroudsburg, Pennsylvania is coming under intense scrutiny after a non-verbal 7-year-old student with Down syndrome, Michael Perrin received two fractures to his face, swollen eyes, and facial lacerations. Perrin’s family claims the school told them he was injured after falling from the school bus, but the school has refused to turn over video footage from the bus. Since Michael can’t speak, he is unable to tell his mother what happened.

Michael’s brother Angel Rivera posted on Facebook, showing his little brother’s severely damaged face and swollen eye. He asked the public to share the picture and story widely as they still don’t know the severity of his eye injuries and were denied access to the video.

“My little brother attends Resica Elementary and has Down syndrome, he was injured at school,” Rivera wrote.

“My mom is asking the school, the bus driver, and school aid what happened and they said he just fell they don’t know exactly what happened.”

Outraged supporters commented on the page, suggesting the injuries to the little boy looked much worse than from a fall and calling for legal action.

“Call the cops they will have to give up the tapes they are lying you don’t fall off a bus and get a fracture,” wrote one person.

“Call the police and file a report. Then they have to release the video! This is unacceptable!!!!” typed another.

Perrin’s mother is blaming the school for negligence in preventing her son from falling from the bus if that’s what actually happened. The distraught, crying mother appeared in an Instagram video posted by Perrin’s sister. The post states that the family is seeking legal counsel and appreciate the support from all over the world, including from celebrity Cardi B, who joined the family in sharing the hashtag, #justiceformichael in her Instagram story along with the captions, “We still speak for you Papi, you will be heard” and “Absolutely not today Satan.” 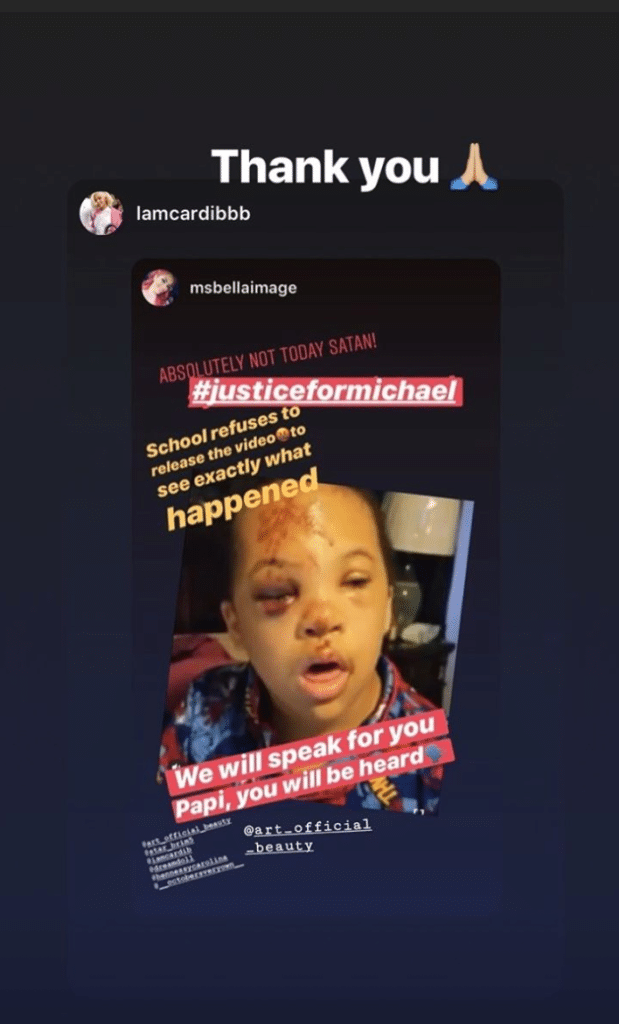 “Help me … this whole [expletive] is a freaking nightmare.”

*** I don’t own the copyrights to this music **** She didn’t know I was recording I had to catch the raw emotions this is not a lite matter my family is hurt #justiceformichael She is the world to me and more the only mother I will ever have I will cherish her and fight beside her always and forever she is the best mother I could’ve asked for with the most amazing heart …We appreciate all the love and support and We love you guys for investing your time in #justiceformichael for trusting the cause earlier today we met with lawyer in the New York City to be redirected unfortunately because of state limits after this and seeing what she saw on tape earlier there’s only but so strong we can be my mother is broken nothing will take away this unfortunate situation we have to deal with so we just pray and we wait and hope #changecomes Specially when it comes to dealing , handling and safety of all special needs children no child should ever come home like this EVER! Many of our special angels don’t have a voice and go years sometimes forever without being able to formulate words…. #imaginethat we must be their voice …….thankfully with all the support and sharing from everyone Family&Friends specially those with mayjor celebrity platforms my sister @mjrodriguez7 she came threw @iamcardib @star_brim5 @dreamdoll @wond3rwoman1 ✊?@therealkortnee @msbellaimage cardi shared your post thank you mami your and angel you been pushing for Michael to be heard! @teatenders___liv @supernoahjacob @posterboyfordior and to everybody literally #bardigang spread the word like wild fire @guapacardi @cardibchannel you all have been a blessing @yahoo has his story up ?? we are forever grateful and faithful in Gods work and don’t stop praying there is still a lot yet to be determined physically mentally emotionally ?? THERE ARE NO GOFUNDME PAGES WE ARE NOT ASKING FOR MONEY ALL WE ASK IS #justiceformichael ……pray for my mothers strength pray for change ! #cnn #pix11 #savedownsyndrome #protectourkids #kyliejenner #ellendegeneres #cardib #downsyndrome #specialneeds #justiceformichael #ellendegeneres #kimkardashian spread the word #justiceformichael #tmz #cardib #kyliejenner

In a video uploaded to YouTube, the mother let the school system have it, claiming that her son’s other eye was starting to swell up three days after the incident.

“Please my Lord and everyone that’s out there that sees this, pray for my little one. Pray for him, and may Michael have justice for their negligence and failure to protect this little angel from Heaven.”

“Because of you, your Mommy will fight so that this will never happen to another child again.”

As you can see, the story is certainly not going away, as this family is well-equipped to bring attention to what happened on social media. The school’s Facebook page is covered with posts about Michael from supporters demanding a release of the video.

Angel and his sister have also warned the public that someone has attempted to scam them, posting a fake GoFundMe page to seek money. They say they only want justice for their little brother, not money.

“We are not asking for money at all,” said Michael’s sister. “All we ask is justice for Michael … pray for my mother’s strength, pray for change.”

According to the Epoch Times, the family has subpoenaed the school for the video evidence.