Dying man wishes to hear Harley’s roar one last time, so over 100 bikers surround his home 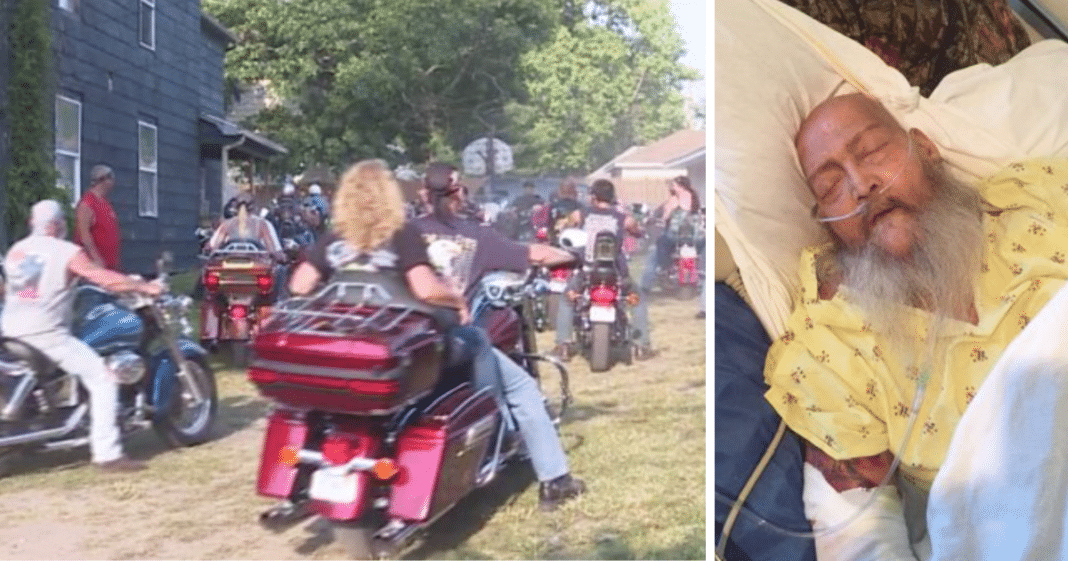 Jon was nearing the end of his life after a long, difficult battle with lung and brain cancer. As a final gesture of love, his friends did something really special to fulfill his final wish.

Jon Stanley, 61 was a bicker from way back in the day, much longer prior to being diagnosed with terminal cancer.

When he fell ill, Jon missed the roar of his Harley, the feel of his glorious ride beneath him. He had one last wish, and that was to hear that roar just one more time before he died.

So when Jon became too sick to move around and needed a respirator to breathe, his brother-in-law Michael Smith contacted local biker, David Thompson.

“I was contacted this morning about 6:30 this morning by Mike Smith through Facebook—and he informed me about Jon, you know he’s terminal, and he’s not looking really good, and one of his wishes was to hear a bunch of motorcycles out his window,” Thompson told WBND.

Sometimes a dying person's last wish is just to hear the sound of a Harley in their window. This is Jon Stanley he has…

Thompson got right to work, putting out an SOS on Facebook, asking for bikers to assemble at Jon’s house in South Bend, Indiana, just so the dying man can hear the tune of Harley engines, which to him was the sweetest sound in the world.

“Sometimes a dying person’s last wish is just to hear the sound of a Harley in their window. This is Jon Stanley he has terminal cancer. I personally met with his family this morning and learned Jon is a vet and was an abate member who has rode for years,” Thompson wrote.

“This is his new Harley he just got and only rode 3 times! I know this is short notice but bikers take care of bikers!” he continued.

It only took a mere six hours to rustle up 200 people and over 100 motorcycles to fulfil Jons’s last wish.

As Jon rested in his bed on June 12, 2017, bikers gathered outside with engines revving and purring. His family decided to carry him outside and sit him in a sidecar, so he could also feel the vibrations one last time.

One of the bikers, Pat Schoff Gragg, who participated in this touching display, told Inside Edition, “You could tell he enjoyed the feeling of that one last rumble.”

He further added, “He was holding on.”

Gragg also noted that there were bikers from different districts, regions, and cities showed up to support this event.

“We rode over, surrounded his house and we revved. Windows were shaking, we knew he felt it,” Gragg shared.

Thompson added, “You could just feel the vibrations. He knew we were out there. He raised his arm up.”

“He got to get on a bike one last time, and that was great,” said Jon’s daughter, Kristy Stewart.

“Knowing that all this happened for one man. All he ever wanted was him and his wife on that Harley,” Jon’s granddaughter, Liliana Ramirez, said.

BIKERS COME TOGETHER: Jon Stanley's dying wish was to hear the roar of a motorcycle one last time. Hundreds of bikers, both friends and strangers, came together last night to ride and gather outside of his South Bend home to grant his wish. Stanley was even able to briefly join the bikers in a sidecar. Sadly, friends tell us Stanley lost his battle with terminal cancer not long after this emotional tribute.

Many of the bikers became emotional and shed a tear or two when they witness Jon’s evident joy.

The kindness of the amazing people involved in this grand gesture went a long way to allowing Jon to leave this world in contentment. His family and friends also gained solace from their beautiful tribute.

A couple of hours later, Jon passed away as he lay peacefully in his wife’s arms.

This is a lovely story that shows how we all have the potential to come together to celebrate the noblest aspects of our shared humanity.