Donkeys are being left bloody, crippled and suffering in agony – all for the pleasure of tourists 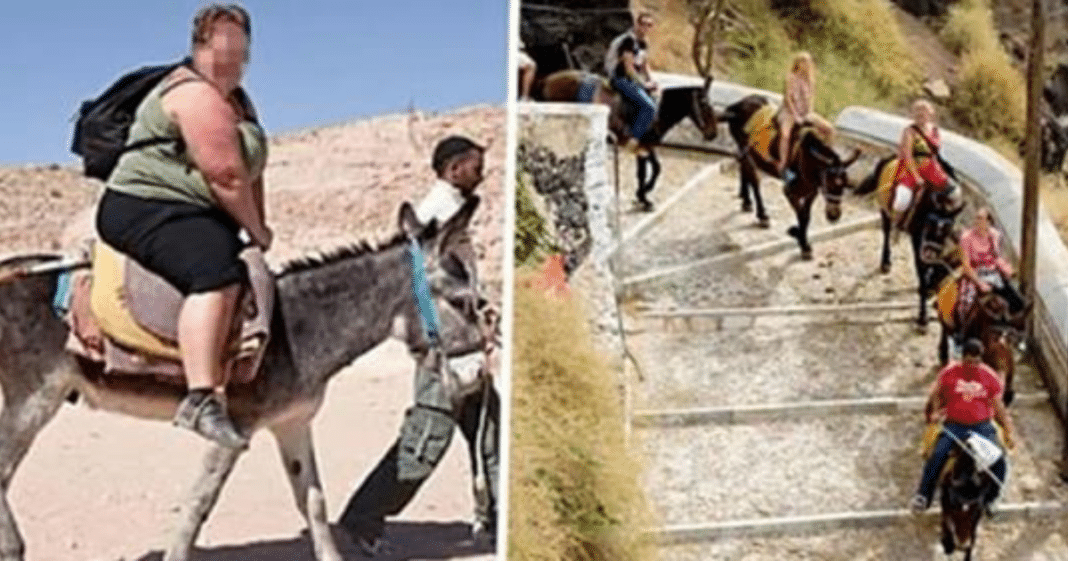 Tourist must overcome over 500 steps before they can enjoy the splendid view from the top of Fira, the capital of the Greek island of Santorini.

Unfortunately, in order to make sure that even healthy non-disabled visitors don’t have to undertake this hard journey themselves, donkeys are forced to walk up and down the hill every day like four-legged escalators.

The traditional ride has been a popular attraction for some time now, but it takes a devastating toll on the health of these poor creatures.

Donkeys have to haul even the heaviest of tourists up the hill one after another, often in searing heat. Many times the path is steep, the stairs dangerous, and the tourist on average are only getting heavier as more overweight people are riding the donkeys, thereby significantly increasing their workload. 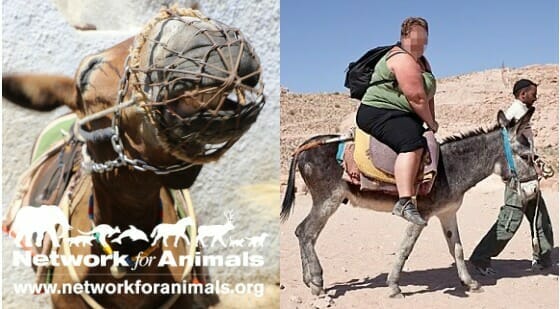 For these animals, it’s a “job” without a break, without a moment’s rest, seven days a week. And do they get ample food and water for their service?

The Sun claims that the owners of the Santorini attraction breed donkeys with horses, which means the mules are bigger, stronger, and able to suffer much longer.

But now animal rights activists have released disturbing images from behind the scenes that have rocked the tourist industry of Greece to its core. 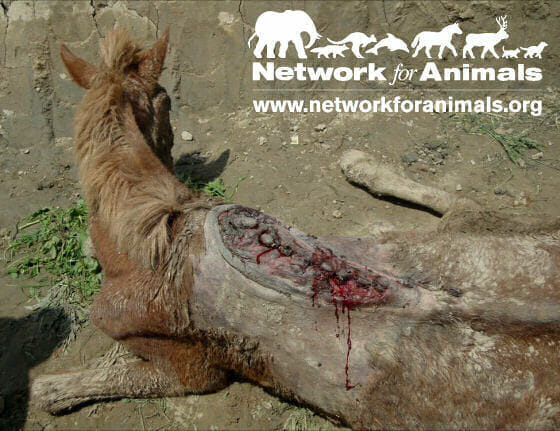 But while a picture may say a thousand words, there just are no words to describe the devastating effects of this type of animal cruelty.

Photos from the Network for Animals were released, and they document the bloody injuries hidden from tourists when they book their donkey ride tickets.

Most donkeys don’t even get proper, tailored saddles, thus making their injuries even worse.

By the end of the day, many of them are so exhausted that they can’t even stand on their feet.

The Sun quotes a spokesperson for the animal welfare organization. Help the Santorini Donkeys as saying:

“It’s recommended that animals should carry no more than 20 percent of their own body weight. The obese and overweight tourists, combined with the lack of shade and water as well as the sheer heat and 568 cobbled steps, is what is causing such a problem.”

Of course, even without hauling the excess weight of overweight passengers, the working conditions of the donkeys are torturous enough.

What can tourists do to stop this?

While the guilt of these poor suffering creatures lays at the feet of the owners and the owners alone.

Without a market for it, without people willing to pay to ride up the hill, their business would dry up.

Tourists play a vital role in fighting against these inhumane practices. They can elect to forgo using these animals to ride up the hill and raise awareness of the animal cruelty involved in the practice.

Thankfully, due to the hard work and efforts by animal rights activists, it’s becoming more and more difficult for the owners to cover up their horrible business practices.

If you or someone you know is considering a vacation to the Greek island of Santorini, please do your part and don’t give these heartless people your business.