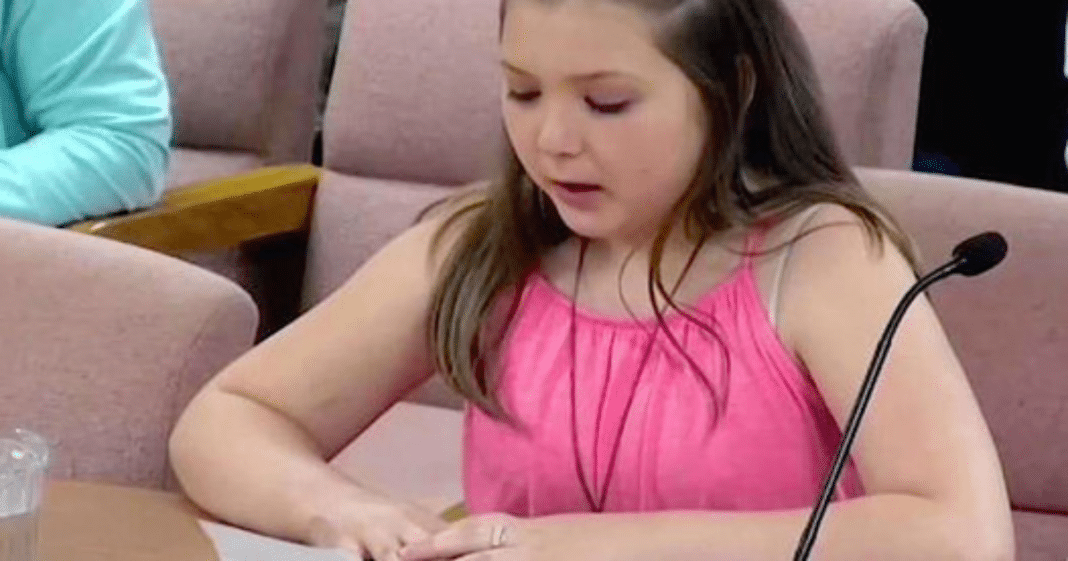 Young Delanie Marcotte of New Hampshire dreaded going to school for a heartbreaking reason that’s becoming the norm for millions of young children her age.

Delanie claimed that she became the victim of terrible physical and verbal abuse at the hands of her classmates.

Her family tried resolving the issue through the school district, but they felt let down by the administrator’s failure to affect change.

In July 2018, Delanie and her parents were in attendance at her district’s school board meeting. The family had enough of the daily bullying and was hopeful that her story would motivate community leaders to take action.

However, just as Todd, Delanie’s dad, was about to face the eight-member board and speak on his daughter’s behalf, Delanie stopped him.

The little girl then did something totally unexpected.

The brave fifth grader made up her mind and wanted to be the one to share her painful experiences.

So Delanie took her father’s place, sat down before the board and proceeded to read her prepared statement.

By the end of her account, all the adults in the room were speechless, and her powerful words resonated with thousands all over the country.

According to the Stop Bullying Now Foundation, at least 60 percent of middle school students like Delanie, say that they’ve been bullied.

While only 16 percent of school staff believes that students are bullied.

At least 160,000 children stay home every day due to bullying.

At least 30 percent of students who reported bullying admit that they had at times brought weapons to school.

A bully is six times more likely to be incarcerated by age 24.

Two-thirds of students who were victims of bullying become bullies.

Only 25 percent of students say that teachers intervene to stop bullying while 71 percent of teachers claim they’ve intervened.

This is a problem no child should have to face alone; together we can change the culture and find ways to eliminate this harmful practice once and for all.