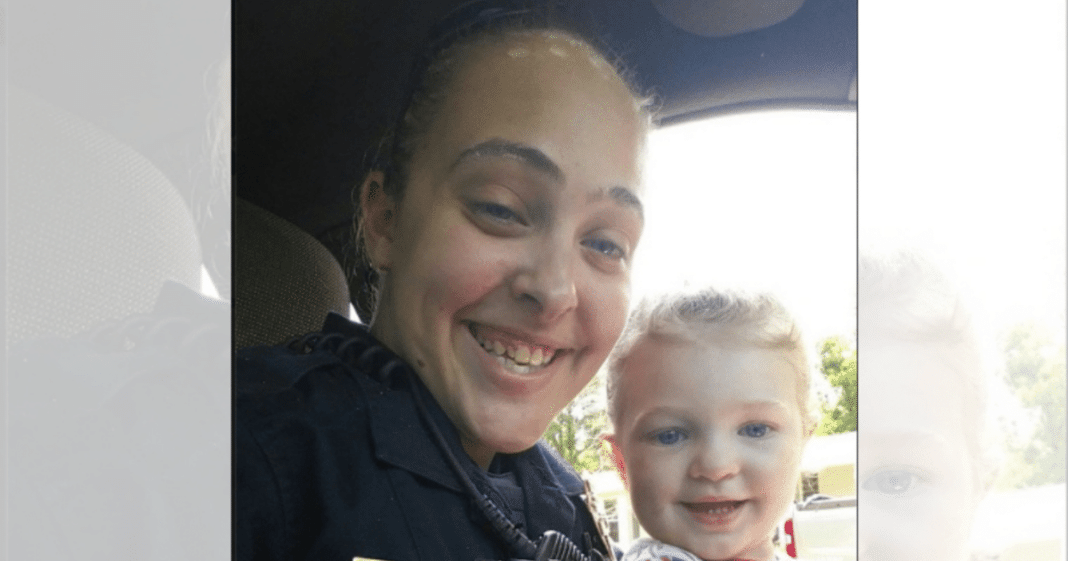 A now-former Mississippi police officer who abandoned her 3-year-old daughter to die in her vehicle while she had sex with her supervisor in his house, has received 20 years behind bars according to People.

The case has inspired a lot of resentment and anger throughout the country and has put a spotlight on the dangers of negligent parenting.

On September 30, 2016, Long Beach Police Officer Cassie Barker, 29 decided to pay a visit to the home of her supervisor, Clark Ladner. At the time she also had her 3-year-old daughter, Cheyenne Hyer in the car with her.

When Barker arrived at Ladner’s home, she left the car running with the A/C on with her daughter still inside.

Little Cheyenne was strapped into her car seat while the temperature outside reached nearly 100-degrees Fahrenheit.

According to reports, Barker was allegedly only there to “talk” to Ladner, but the two wound up having sex.

Barker, completely forgetting about her daughter, then went to sleep for four hours with Cheyenne still in her running car.

Sadly, the A/C in the vehicle wasn’t blowing cold air when the little girl was found still strapped in her seat unresponsive.

She was rushed to a nearby hospital where she passed away.

Soon after the incident both Barker and Ladner were fired from the Long Beach Police Department.

Initially, she was indicted on second-degree murder but accepted a plea agreement for a lesser charge.

Heartbreaking scenes unfolded in the courtroom as Barker broke down crying while offering to her dead daughter.

“I want to say that the only person I owe an apology to was my daughter because no one else was in her life but me,” Barker told People.

“I don’t know what I could ever do to you that could be worse than what you’ve already experienced. You will forever be entombed in a prison of your own mind.”

The sentencing has received widespread commentary across the internet. Victor, the foxhound, commented on Twitter:

Apart from the obvious tragedy of the little girl’s death, doesn’t it say a lot about the culture in the Police that;  A) she was driving around with her daughter in the patrol car, and B) that she was shagging her boss and not doing her job. Another Twitter user Darrell Lucus welcomed the sentencing and said it’s what Barker deserved. He wrote: Thank God, she got the maximum. There would have been something wrong if she’d gotten any less.

Katy B, another Twitter user focused on the fact that Barker had a history of neglecting her parental duties, writing:

Cheyenne’s father, Ryan Hyer, said that he was devasted by his little girl’s death. According to the Sun Herald, he said:

“As a parent, you are supposed to protect your child, and Cheyenne is gone because her mother didn’t protect her, not once but twice. May God have mercy on her soul.”  He told People, “When it was time to view her (Cheyenne’s) fragile body, I kept telling myself to be strong. However, I broke when I saw my beautiful, sweet, funny and innocent angel laying in that casket.”

He added, “I just wanted to pick her up and hold her and hold her and tell her, ‘Everything was going to be OK, Daddy has you. I have blamed myself for every what if, should have and could have. My life has been a complete hell without Cheyenne. This will never get easier.” Barker, however, claimed that she had not spoken to Hyer since July 2016 and that “he doesn’t even know what her (Cheyenne) favorite toys are.”

Another report from the Sun Herald revealed that Barker was also pregnant with a second child prior to sentencing. Her attorney, Damian Holcomb, told the paper that his client plans to put the baby up for adoption after she gives birth.

“We were told there are a million people who have babies while they are in prison,” Holcomb said. “The way it works is once you are medically cleared you go back to whatever prison you are supposed to go back to. “