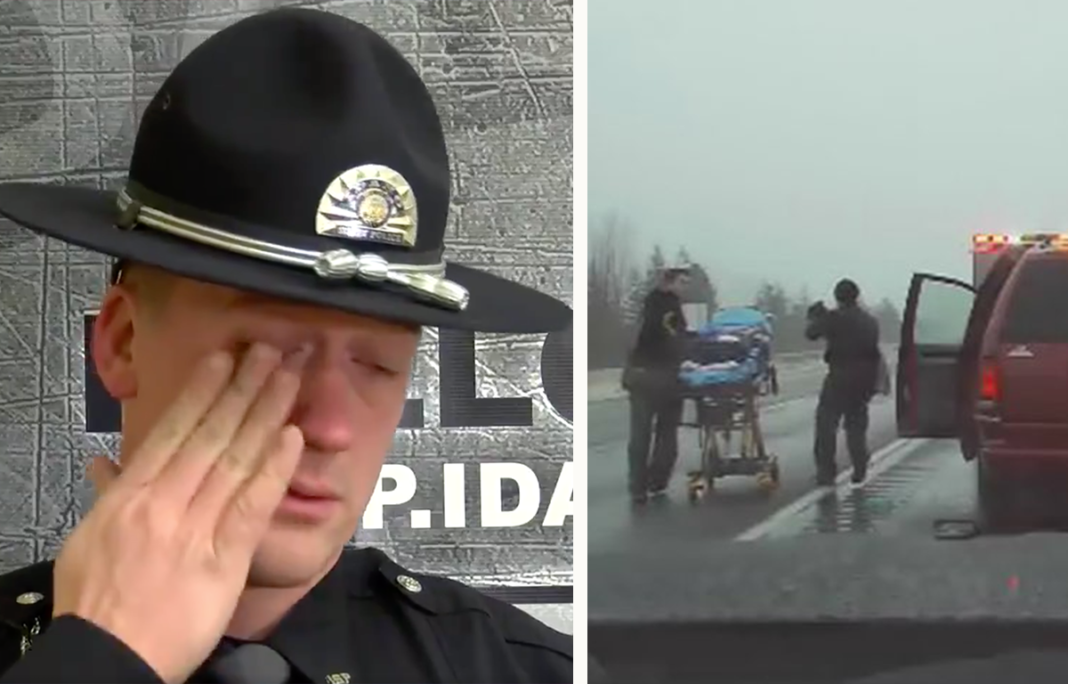 A routine traffic stop by an Idaho State Police sergeant led to one of the most disturbing sights he had ever seen in his career. Inside the car, the police found a beaten 32-year-old woman, a 1-year-old, and 2-year-old boy laying in the fetal position in the backseat. The older boy was abused so badly he was near death. Now, doctors credit the Troopers actions with saving the child’s life.

Sergeant Justin Klitch told KREM2 News about the traffic stop on I-90 in Shoshone County:

“I’ve never seen anything quite as traumatic as this to a small child, innocent child,” Klitch said.

The worst part was when the trained paramedics arrived and realized how serious the situation was.

“But what really made me know things were serious was the paramedic had a look on his face of panic,” Klitch said.

At 5, hear from one of the @ispdistrict1 troopers credited with saving the life of a 2 year old boy earlier this week.

A simple traffic stop prompted the discovery of abuse.https://t.co/l5FciBr7ZQ pic.twitter.com/8nW6GcTeT7

Trooper Shane Grady was also on the scene and broke down in tears when he discussed what he witnessed in the van. Grady rode in the ambulance with the boy, referred to in later reports as “Baby J.” He recalled that the boy almost didn’t make it when his heart rate escalated to over 180 beats per minute.

“While we were there, he had discovered a small boy in the back seat, severely injured. He had bruises on his head, multiple lacerations on his stomach. His arms were stuck in a fetal position, and his left eye was not functioning properly,” said Grady.

The Idaho State Police Twitter account answered repeated inquiries about Baby J. He was taken to Sacred Heart Children’s Hospital, where he soon made a miraculous recovery, even though he suffered life-threatening injuries. Those injuries included brain trauma, according to a report from Shoshone News-Press.

Fortunately, Baby J and his brother were turned over the custody of the state. His little brother was unharmed.

UPDATE- Baby J is out of ICU!!! Sgt. Klitch just left Sacred Heart Hospital and said Baby J is alert, engaging and playful. We are all so thankful for the hard work and care of the Sacred Heart Pediatric ICU team! Still work to do but good news none the less.

An update reported that the police were planning a special visit for Christmas, with an appearance by Santa. Later, Sergeant Justin Klitch and his fellow Troopers visited the boys. Baby J was “smiling and happy and talking.”

❤️Baby J Update❤️ Last night Sgt Klitch & Troopers Walker & LLerenas visited Baby J. He was smiling and happy and TALKING!!! He brought the boys to tears. Still a ways to go, but the staff at Sacred Heart Children’s Hospital is making this miracle happen. #nevergiveup

In later updates, the police Twitter account stated that they were working with state agencies to find the boys a safe and loving home.

We are working very closely with Idaho & Washington Child Protection services as well as CASA to help ensure Baby J and his little brother find safe places to live. Redmond WA Police are also working on the criminal side of this case. https://t.co/viSHq1wGPO

Meanwhile, KREM2 reported that the driver, Jorge Gonzalez-Vergel, 59, was not a suspect in the abuse. In fact, Gonzalez-Vergel was attempting to rescue his ex-wife and children from the abuser, who may have been Neiss’ partner at the time. He is a three-time convicted felon and the probable biological father of the 1-year-old boy.

The woman, Jessica L. Neiss of Redmond, Wash., is the biological mother of the two children and the ex-wife of the driver. It appears she had called her ex for help and he came to rescue her.

In the traffic stop, Troopers discovered meth, a firearm, marijuana and drug paraphernalia in the van. Gonzalez-Vergel was arrested and booked into Shoshone County Jail. The charges: felony possession of a firearm and trafficking methamphetamine. He intended to kill the abuser with the firearm in retaliation for the abuse, according to his admission to detectives.

“The defendant had not taken any action to seek medical attention for the injuries to his son and luckily law enforcement made this traffic stop in Shoshone County, which ultimately likely saved his son’s life,” she added.

Gonzalez-Vergel was arraigned on January 9. He accepted a three-year fixed prison sentence for a felony unlawful possession of a weapon charge and felony trafficking methamphetamine charge. He now also faces possible deportation by ICE for an immigration violation.

“Mr. Gonzalez-Vergel is a good person and cares about his child very much,” he said. “He was on the way back after having rescued his child and his ex-wife or girlfriend when she called and said that both she and the child had been beat (sic) up.”

Tuesday during a traffic stop on I-90 Troopers LLerenas, Grady & Stemm & Sgt. Klitch. helped rescue a 2 year old boy who had been severely injured from suspected abuse and neglect. Doctors credit the Troopers actions with saving the child’s life. pic.twitter.com/nSEbjau3iS