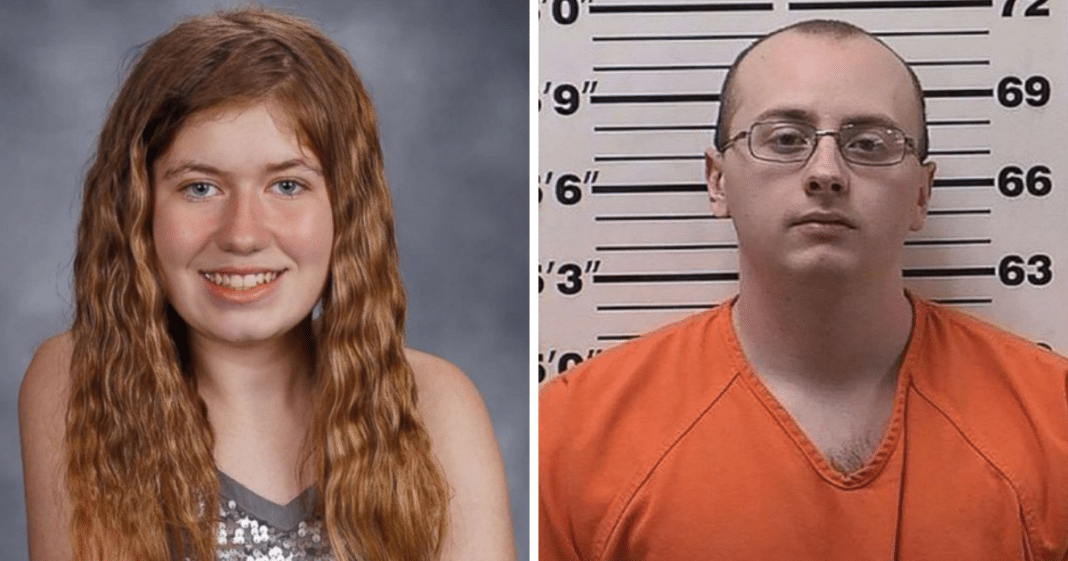 In a shocking turn of events, a 21-year-old man has been charged with kidnapping Jayme Closs, the 13-year-old girl who had been missing for three months, and killing her parents after the teen managed to “survive and escape” his clutches.

Friday morning, authorities identified the suspect as Jake Thomas Patterson of Gordon, Wisconsin. The same town where young Closs was found alive 88 days after she was abducted.

Patterson, who is currently unemployed, had been keeping Closs hidden from his friends and family, Barron County Sheriff Chris Fitzgerald revealed.

“The subject planned his actions and took many proactive steps to hide his identity from law enforcement and the general public,” Fitzgerald said.

In a case that inspired numerous searches and thousands of public tips, it ultimately ended with 13-year-old Jayme helping herself to freedom Thursday afternoon.

“In cases like this we often need a big break, and it was Jayme herself who gave us that break,” FBI Special Agent Justin Tolomeo told reporters Friday.

Closs made the daring escape from Patterson’s home, where she was being held against her will. The circumstances under which she did so have not yet been released.

“It’s amazing, the will of that 13-year-old girl to survive and escape,” Sheriff Fitzgerald said. “That comes from the hope and the prayers in this community and what everybody did.”

It is unclear if the suspect knew Closs or her family before she was kidnapped, but the perpetrator did have ties to Barron County, . Authorities believe he did not have contact with the family and that Closs was the “only target.”

A woman walking her dog found the teen and took her to a nearby home, where the residents offered Closs food and water, which the young girl declined, and called 911.

Both the woman who found Closs and the residents of the nearby home recognized her from media reports, Fitzgerald said.

Jayme told her rescuers that she had been held in the Gordon area by someone who killed her parents on the night she disappeared.

“She said to us that, ‘This person killed my parents and took me,'” revealed the homeowner.

Douglas County deputies located a vehicle matching a description of the suspect’s car provided by Closs, pulled the car over and a suspect was arrested 10 minutes later. He was taken into custody in Douglas County and is currently being held at the Barron County jail on two charges of first-degree homicide and one charge of kidnapping.

Jayme Closs had been reported missing since Oct. 15 after her parents, James and Denise Closs, aged 56 and 46, were found shot to death in their home in rural Barron, Wisconsin, about an hour’s drive from where Jayme was ultimately located.

Authorities are still working to learn what happened to Closs during the three long months she was missing. Investigators received more than 3,500 tips during that time, Fitzgerald said.

Shortly before Closs was found, a fake alert in Walworth County had been released saying she had been located, Fitzgerald said.

“Jayme is safe, and the family is requesting that you please respect their privacy at this extremely emotional time,” he said.

Jennifer Smith, Jayme’s godmother, revealed that Jayme was recovering in a hospital near Duluth, Minnesota, and is expected to be released Friday.

Jayme’s relatives are all breathing sighs of relief.

“I can’t thank everybody enough for not giving up on Jayme,” said Smith.

Patterson does not have a criminal history, and authorities are not searching for any additional suspects, Fitzgerald said.

Additional details will be released by authorities during a 5 p.m. ET press conference.

We are so happy young Jayme has been rescued. Bravo to the brave girl for taking matters into her own hands. No one should have to go through something like this. Our prayers are with her.