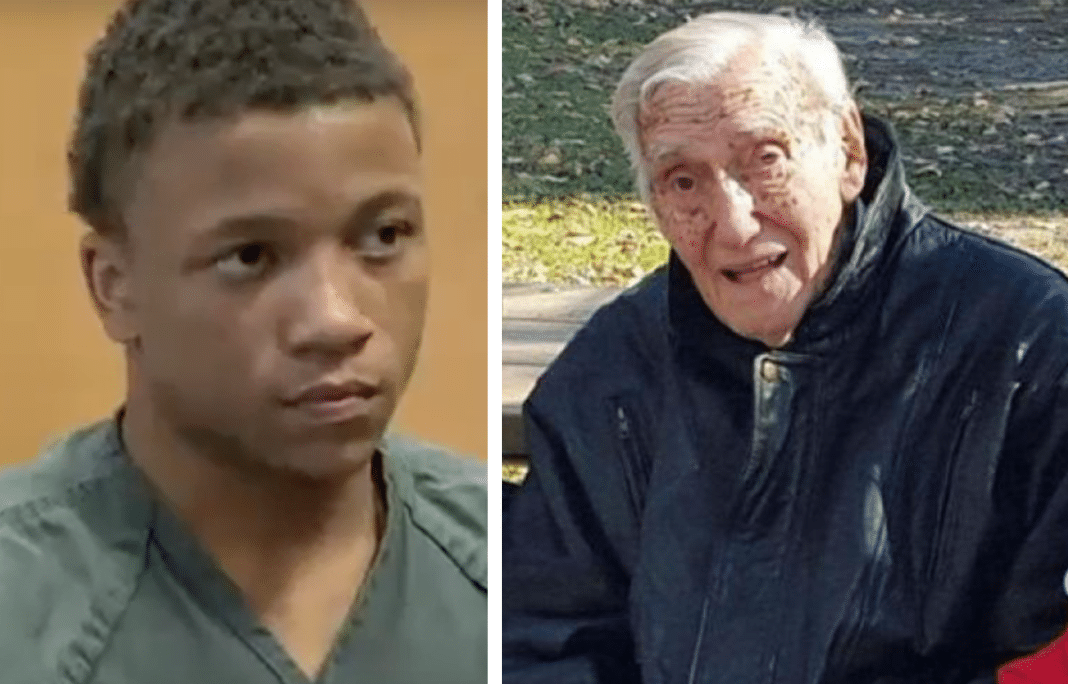 A 91-year-old immigrant from Poland who lived in Detroit, Paul Monchnik was a World War II Army veteran and dreamed of living to be 100 years old. Then days before Thanksgiving in 2015, George Stewart IV, a 17-year-old boy staying at his grandfather’s house next door, stood on the steps and told the local news that he saw somebody stealing Monchnik’s van.

Firefighters were called to the home in the early hours of November 23 at 2:50 a.m. when the house went up in flames. Stewart told the news crew:

“And I just seen the person driving off with his car. Next thing you know, two minutes later, I walk in the house, and we smelled fire. I look outside, and I see a whole bunch of glass breaking,” he said.

Once inside the home, the firefighters found the badly burned body of Paul Monchnik laying near the front door. The retired TV repairman was brutally beaten, stabbed, and then set on fire. The medical examiner later found a one-fifth cup of gasoline in his stomach but couldn’t determine if the nonagenarian had been forced to drink it while he was alive. 80 percent of his body was covered in burns.

Here's Paul Monchnik, 91. He was found at home, in a fire. Police investigating as a possible murder. #local4 pic.twitter.com/UQqiK3vFgS

Monchnik may have been knocked unconscious by a blow to the head after two ribs were broken on his left side. Police believed the suspect had left Monchnik’s home driving his 2000 silver Chevrolet minivan, went to buy gasoline, and returned to set the victim and his house on fire to cover up the murder.

Monchnik’s son Monchnik, 56, asked for the public’s help to “get this scum off the streets” after witnessing “a scene from hell” at his father’s home.

Soon after the crime, police released security footage from a nearby gas station, looking for a suspect who purchased gas and stole the van, as Stewart had suggested. Then a resource officer from Romulus High School and Stewart’s aunt recognized Stewart in the footage and called the police.

The police immediately returned to the home on the 20500 block of Bentler Court and searched for Stewart, but he wasn’t there. They found blood on a pair of tennis shoes and Monchnik’s broken cell phone in the back yard.

The next day George Stewart turned himself into police, relieving the Detroit community who feared the suspect was on the loose. He was charged with first-degree murder, felony murder, and arson and sentenced a year later to 30-60 years in prison.

Scott Monchnik remembered his father as a kind-hearted man who was well-known in his community and who knew Detroit inside and out as he worked fixing televisions for 50 years. He was looking forward to spending time with his family for Thanksgiving.

Scott Monchnik son of Paul Monchnik, speaks in court about his fathers murder. Steward sits with head down. pic.twitter.com/hCgy9XOjzC

According to Inside Edition, Monchnik had three children, four grandchildren and two great-grandchildren he had only just met two weeks before the murder.

“He came over as an immigrant when he was about eight from Poland,” his son, Scott Monchnik, 56, told Inside Edition. “He went to school in Detroit, then he went off to World War II. He was in the Army; he made it through the war.”

“He was always in Detroit. He went into people’s houses and fixed their TVs. He knew every street in the city, and it’s a big city,” Monchnik said. “He was kind and open-minded… He had no prejudice, he had no malice and he was a kind-hearted man.

“He worked very, very hard to support his wife and his family and he wanted to live to be 100 and this kid cut that short,” he continued.

“And that’s one of the hardest parts. He didn’t get to pass away quietly in his sleep as an old man,” he said. “His life was cut short by a senseless, meaningless crime. There were no values, nothing valuable in the house. It was an old car with very little to no value. There was no point and there’s no reason, no way of understanding why this happened.”

Speaking directly to Stewart he said:

“You have taken something that was not yours to take.”

The motive for the crime remains unclear. We hope that by telling his story, we can honor the life of Paul Monchnik, a wonderful veteran who served his country and his community well for a lifetime.

See what happened from WDIV: