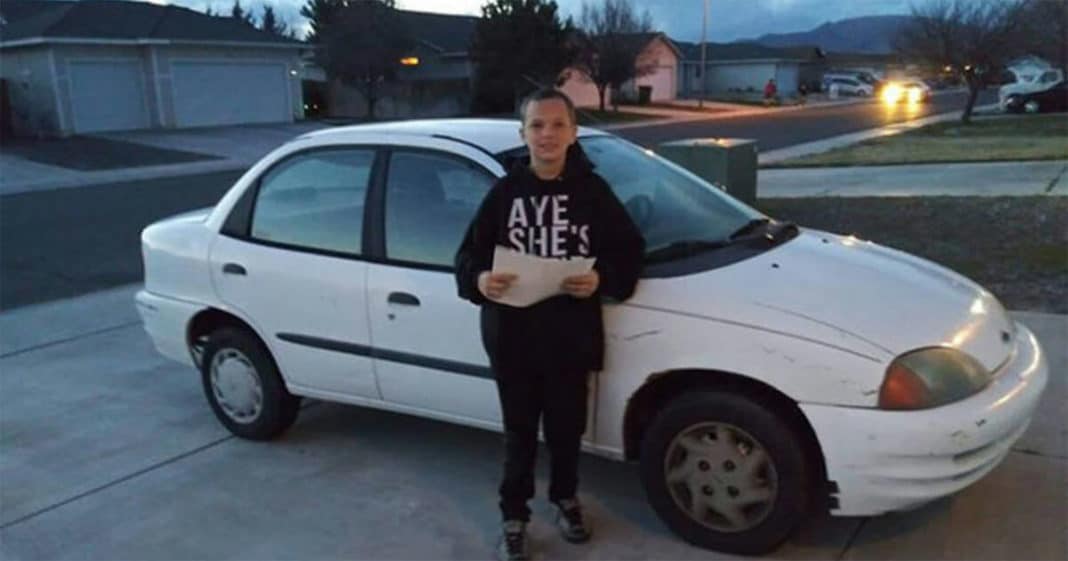 Most 13-Year-Old boys are thinking about things like girls, video games, and maybe homework assignments.

But for William Rabillo he had different priorities in mind.

Such an inspiring story! A family in Fernley recently had to start life over from scratch. To help provide for his single mother and family, the 13-year-old son bought his mom a car! The one of a kind story airing tonight exclusively on @KOLO8 News at 10 and 11! Don’t miss it! pic.twitter.com/frda3kOpZL

“I have no words right now that can express how I am feeling at this moment. I’m in complete shock … The last couple weeks have literally been hell filled with so many tears, anger, confusion and heart ache. Today I got the shock of my life..

As some of you may know my son William, who is a lawn mowing, yard cleaning , money making machine. Well my son had a job today that he had to go do and so I allowed him to go assuming it was like any other time. Well this time was different. Very different.

William came home and said, ‘Mom I bought you a car.’

I of course laughed and told him ‘ya right!’

I’m at this point confused and sceptical and I said, ‘Go where?’

And much to my surprise I go in my front yard and OMG there is a women standing there and as William said she was giving us a ride. William jumps in the car so I’m like ok?? This is some kind of joke right. No one speaks really….

So….. As I’m still thinking at this point still a joke. We pull up to this house and William says, ‘Mom that’s your car….’

I completely lost it.

I started balling my eyes out. I am speechless my 13 year old son bought me a car. He did some work for this women and that was his payment that he worked out with her. And here I thought it was a joke… Nope I was handed the keys and paperwork to the car and I’m freaking out but so in shock like OMG this is happening right now. So we got into the car it started right up and off we went.

I am so proud of my son. He is such a good kid. He may have his days but OMG what 13 year old kid do you know that buys his mom a car… William I love you son and thank you. You have such a big heart and I love you…”

William told a local news station that he first got the idea after watching YouTube videos.

“I saw on YouTube where people get their mom a car and then surprise her with it,” William said. “I wanted to do that.”

The teen then came across a woman selling her 1999 white Chevy Metro on Facebook and reached out to her about buying it.

“It was really cheap so I asked her if I could trade it or earn it, and at first she said no,” he said. “After she thought about it, then she said yes.”